And for my next trick, I will attempt to write intelligently about Michael Bay and the Transformers franchise.

My qualifications for doing so are:

2. I’m not a Sci-fi summer blockbuster fanboy who drives a yellow Camaro with a BMBLBEE license plate (I swear to Your Deity that I saw that very thing in the Costco parking lot the other day and laughed heartily).

3. Megan Fox vs. Rosie Huntington Whiteley in a no-holds-barred, bikini mud-wrestling extravaganza. This isn’t really a qualification, but today is Str8 Sunday here at PFC and I get to girl the place up for the next 24 hours. 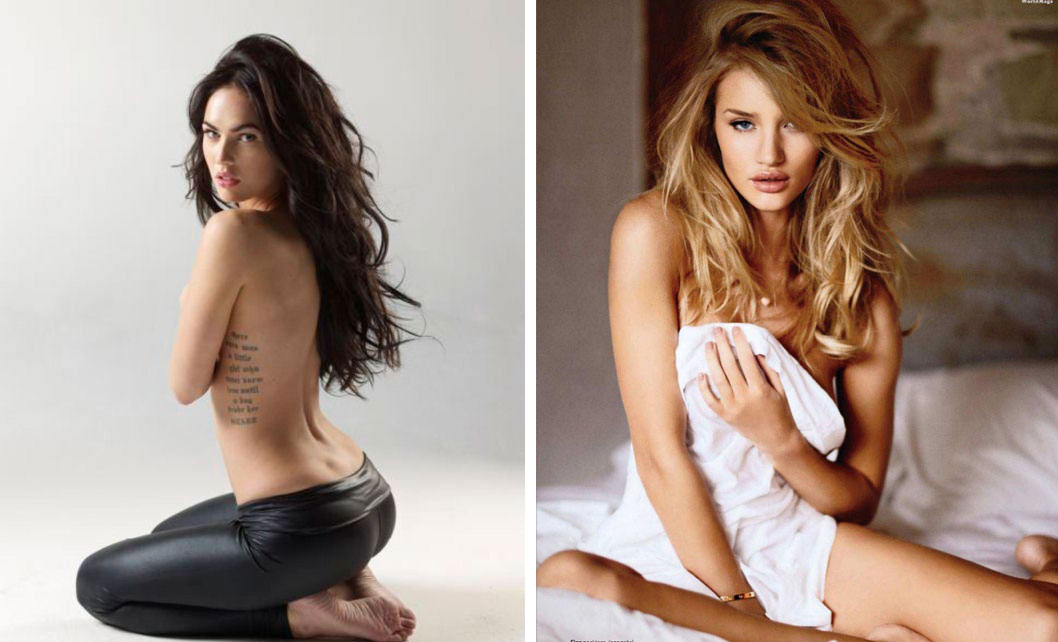 First, I’ll address the fanboys’ case… Lads, saying, “But Transformers movies are supposed to be stupid!” will never be an impressive counterpoint to any argument. And now, moving onto the professional reviewers…

The words “Michael Bay” seem to have the same effect on movie critics that the words “Sarah Palin” have on Democrats. It’s as if all critics had an I HATE YOU microchip implanted in their brains at birth that activates whenever the man’s name is mentioned. Critics’ hostility toward Michael Bay rivals that of Godzilla toward Megalon or me toward Audi drivers. Few will mistake Bay’s movies for art (besides your truly, as you’ll read below), but the Transformers films are regularly accused by critics of being the worst movies ever made. This, despite the ubiquity of unwatchable drek like Crank: High Voltage and other, even-shittier movies available for consideration. Boring ex-hippie rag Rolling Stone usually leads the charge on this front.

Jason Statham in "Crank," pissed that he still doesn't have an Oscar despite his stellar selections.

No surprise then, that Transformers: Dark of the Moon, fresh off a $100 million-plus opening weekend, was savaged by said critics. I agree that it has a many things wrong with it, like big-budget summer action movies often do. But most of these reviews are as predictable as the movie: It’s an interminable 154 minutes. Why do critics always list the running time of movies they hate? It’s nothing but noise and explosions. Ok, Gramps. Nap time.  Michael Bay hates you. No, you hate him.

Is it asking too much of someone who gets paid to sit on his ass and watch movies to be professional, i.e., discuss a film based on its merits and flaws, rather than regurgitate the same bitch fest from last time? In other words, don’t blast a filmmaker for being lazy, rote, and predictable by writing a lazy, rote, and predictable review. Because I promise that the worst movie ever made was a Herculean effort compared to the best movie review ever written.

Michael Bay with the critics he really cares about. And he routinely bangs his pick of Maxim's Top 100 Sexiest Women. So there.

What’s actually wrong with the Transformers movies, this third installment being the worst offender, is the screenwriting. If the truism in politics is, “It’s the economy, stupid,” then, in the movie business, it’s the script, stupid. If your script is incoherent, how can your movie not be? Dark of the Moon is jammed full of pointless, bizarre characters (what the hell are you doing in this movie, John Malkovich? Literally, what are you doing? You act like a crackhead on speed who’s using cocaine), story threads that go nowhere, and falsely dramatic moments that arrive without setup (we know it’s meant to be emotional because the actor’s bottom lip is trembling and violins are sawing away in the background). One such scene involves a hero robot about to be killed, execution-style, by a villain bot. No kidding. Never mind that this hero bot was mistakenly thought to have been killed earlier in the movie and no one cared. The whole sequence reminded me of the heart-wrenching ending to Titanic, when Jack Dawson dies and true love is lost. Or not.

The most egregious flaw involves the trilogy’s human hero, Sam Witwicky (Shia LaBeouf). Other than serving as the regular guy we allegedly relate to (because I know lots of dweeby, skinny dudes with no money who date a succession of supermodel-grade hotties), he is irrelevant. He’s wedged into the story via a subplot about being unemployed and also by a pseudo love triangle with new girl Rosie Huntington Whiteley and the bland human villain played by Patrick Dempsey. Otherwise, he just runs away a lot, Monty Python and the Holy Grail style, screaming.

Shia LaBeouf screaming, running and holding Megan Fox's hand, never a good idea if you're actually running away from something life-threatening. Just leave the bitch behind. There are plenty more supermodels at the next casting call.

Let’s talk Megan versus Rosie (sans mud wrestling). Megan Fox being kicked off the Transformers series might be the most talked-about celebrity firing since Truman shitcanned MacArthur. No need to rehash the reasons. So how does her replacement, Victoria’s Secret model Whiteley fare? Well, she beats Meryl Streep, hands down, at pouting and gazing at nothing, but otherwise serves as little more than pretty scenery. And I’d believe in giant space robots before I believe her character, Carly, would date LaBeouf’s goofy Sam.

It’s almost obligatory for people on the internets to accuse Fox of being a horrible actress, but that’s also rote. In contrast with Whiteley, Megan Fox has real screen presence, and not just in Transformers flicks. Watch her in the underrated How to Lose Friends and Alienate People or (if you can sit through it) Jonah Hex. Movie cameras love her. She may be burdened with a squeaky voice and won’t win any acting awards, but she managed to choke out two movies worth of Michael Bay-authorized dialog in fairly believable fashion, which is more than can be said for the far-more-accomplished Frances McDormand in the new film.

Because it is Str8 Sunday at PFC, we'll insert another pic of La Fox and not say another thing... not even about her extensive plastic surgery. No. Not a word about it. We'll just sit here quietly sipping on Cosmos waiting for Monday.

And I’m not being pro-Megan because I’m harboring some fantasy that Fox will read this and find it impressive enough to link on her Facebook fan page, as the subject of one of my other PFC stories did recently. Really. I’m not thinking that. Megan.

Here’s what film critics refuse to consider or acknowledge when lost in their drunken haze of blind Baytred: These movies are beautiful to look at. Bay is no hack when it comes to painstakingly shot action sequences or raising the bar on digital technology. My general reaction to CG-heavy action films is boredom. Most digital landscapes look gauzey and lifeless, like French academic paintings (never pass up a chance to take potshots at academy paintings), and CG creatures often appear weightless and cartoony. If critics could put the hostility aside for a moment, they might recognize that the seamless blend of practical and digital effects on display in Transformers 3 is years beyond anything offered in this summer’s other action films. Forget the lame story, just for a few minutes, and take in the photorealistic ballet of motion, color, and light. There’s art in the middle of all that mayhem. Really.

I’m convinced the Futurists would agree, if they hadn’t died tragically of old age and jungle rot. This short-lived Italian art movement in the early 20th century reflected a fascination with an increasingly fast-paced world of industrial automation and modern modes of transportation. The Futurists were intrigued by the fluidity of machines and people in action and the small increments of motion that were now able to be captured in frames of movie film. Check out these two Futurist works by the movement’s greatest practitioner, Umberto Boccioni, Unique Forms of Continuity in Space and Dynamism of a Soccer Player (both 1913). He was evoking Transformers imagery before Optimus Prime was a glint in his father’s electric eye: 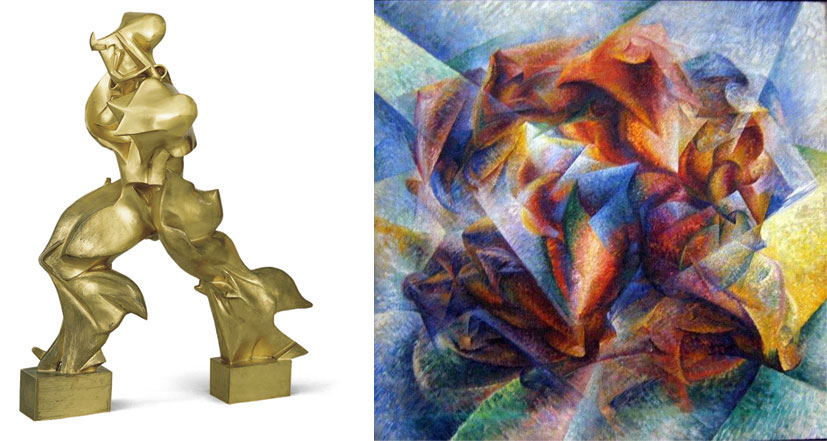 One film critic, apparently not sharing my perspective on art, claimed that the robot effects in Transformers: Dark of the Moon were poor compared to those rendered by James Cameron’s team in the original Terminator (1984). No one is arguing that Terminator isn’t a far better film, but the low-rent stop-motion effects briefly glimpsed at the end are hardly the reason. Critic, you really should watch the movie you are paid to review.

Despite the vastly different critical responses to their films, Bay and Cameron are alike in many ways: Both are egotistical overlords and control freaks who make epics, have a high tolerance for atrocious dialog, push the limits of special effects, and leave their actors to sink or swim. The fundamental difference between them, and the reason Cameron’s movies are always so much better, is the humanity that lies at each story’s thematic core. Bay’s movies don’t actually have a thematic core. They have eye candy. That’s why he hires Victoria’s Secret models instead of Kate Winslet.

Critics often say Michael Bay has contempt for his audience, which any behind-the-scenes look at his work proves false. He’s desperate to please his audience, but, like George Lucas, he has forgotten what real people care about (hint, Michael: it’s people). Given the level to which he has elevated the quality of robot effects, it’s ironic that Bay’s films are so like cinema’s first famous, yet primitive, robot, the Tin Man: They have no heart.

They might not have a brain either, but I limit myself to one Wizard of Oz analogy per day. 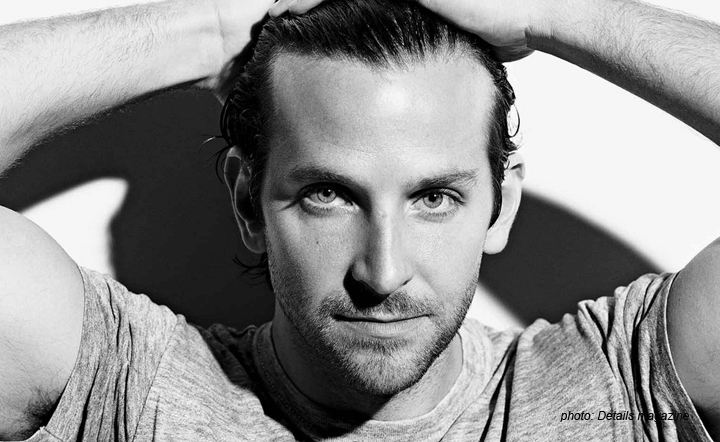 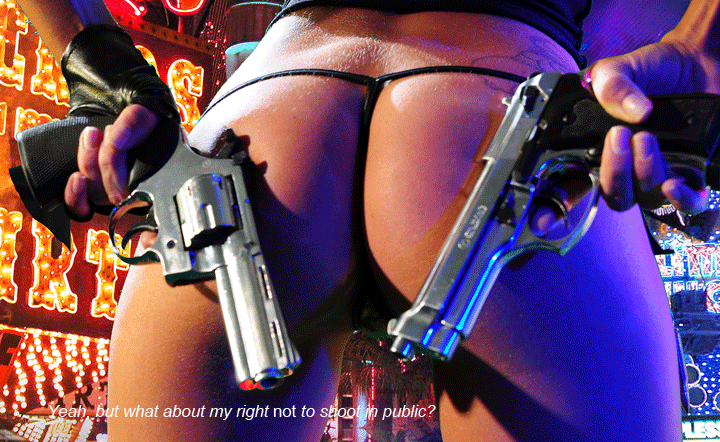