I’ve seen the future of horror, and its name is Television.

I’m paraphrasing Stephen King, who once said that about author Clive Barker (and was wrong). Consider the recent slate of theatrical horrors: Colin Farrell couldn’t get people to shell out 10 bucks for the tepid Fright Night remake. Daniel Craig scared up even fewer ticket sales for Dream House, and Sarah Jessica Parker, though terrifying to look at, did not draw a crowd for I Don’t Know How She Does It. I mean, why go to the movies for horror when you can see more intense stuff in The Walking Dead and American Horror Story right from your couch?

Elisabeth Harnois, whose connection to this story is tenuous at best. The impossibly adorable “CSI” star is 32, despite looking 16, which makes my attraction to her a lot less creepy. Maybe.

I’m not sure when it became acceptable to show disembowelment, beheadings, and flesh eating on primetime television, which are acts that would earn most theatrical movies an NC-17 rating. Perhaps the immense popularity of CSI: Crime Scene Investigation is the culprit. Cop shows – the only network shows where weekly killings have long been tolerated and expected – used to depict the vic crumpled in a corner with maybe a red spot for a gunshot wound. Then CSI came along with its slow-mo, 360-degree sequences of bullets exploding inside people’s brains and child autopsies and time-lapse decompositions and – voilá! – cannibalism is now kosher for TV. I never actually watched CSI until this season, and that’s only because they just cast Elisabeth Harnois, above.* Don’t tell my wife. She thinks I’ve taken a sudden interest in law enforcement and test tubes.

You may know that AMC’s The Walking Dead returned to the airwaves last Sunday night for its long-awaited second season and smashed ratings records for basic cable in the process. The episode itself – involving a search for a lost girl – was somewhat rambling and plotless, though that’s not a particular cause for concern, yet, as last season’s fireball climax necessitated a less-eventful follow-up. You can’t almost kill your entire cast every minute of a weekly series. The audience goes numb and stops caring. Besides, clips from upcoming episodes promise plenty of action and dramatic turns, and a period of calm makes the next unexpected strike all the more dazzling. Anybody remember what happened in episode 4 last season? When it comes to “Holy Shit!” moments, that one was akin to Michael killing Ana Lucia and Libby during Lost’s second season finale.

Rick Grimes (Andrew Lincoln) – The Pa Ingalls of the 21st century. He’ll rescue anybody from a zombie attack, no matter how little they deserve it.

The biggest threat to AMC’s hit series is the producers allowing the story to drift indefinitely. A show about people trying to survive a global zombie apocalypse loses its bite (pun intended) if it devolves into one undead attack/escape set piece after another. Season One had the luxury of introducing the characters and bringing them together over six well-produced episodes. Now our heroes need to shit or get off a plot. 13 episodes and no more Frank Darabont means less vision and more thinly spread resources. If the writers decide earnest good guy Rick Grimes (Andrew Lincoln) needs to water ski over a shark tank, we’ll know they should have made it into a miniseries.

The zombies in The Walking Dead look awesome, full of gaping holes and bite marks – just the way zombies ought to, even if the depiction is unrealistic. For zombies that resemble actual corpses, check out Lucio Fulci’s Zombie (1979) or any number of similar Italian undead flicks from the disco era. Some people mock the primitive effects and lumpy faces, but look at a picture of a dead human that’s been sitting in the sun for two days. Better yet, don’t.

Despite my soft spot for spaghetti splatter, it’s the American zombie film that transcends the genre. Indeed, the zombie film has replaced the western for filmmakers seeking to offer commentary on life in the USA. The John Ford epics Stagecoach (1939) and The Searchers (1956) were as much about manifest destiny and finding our cultural identity as they were about cowboys and Indians. But after the cinematic paradigm shift caused by Night of the Living Dead in 1968, newer westerns seem more like period dramas. Do you yearn for veiled satire about rampant materialism? See Dawn of the Dead. Criticism of American foreign policy? Land of the Dead. Want to watch a formerly dead fat chick getting sassy and wearing too much lipstick? Check out Drop Dead Diva on Lifetime. It’s got something for everyone (who isn’t a man), though it’s mostly crying and positive body image.

Oddly enough, The Walking Dead feels an awful lot like a western. A bunch of apocalypse survivors (frontiersmen) are traveling in a caravan (wagon train) through the desolate wasteland of a destroyed civilization (the wild, untamed west), fending off attacks from what they see as a soulless enemy that they are permitted to kill with impunity. The main character is a sheriff (Marshall) whose only hold on authority in a lawless world is that people depend on him to keep them safe. Sometimes from each other. 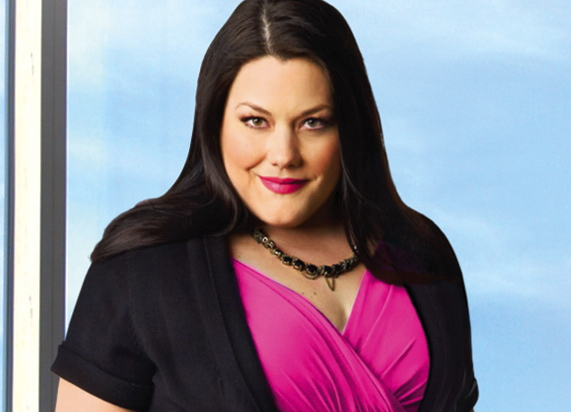 Jane (Brooke Elliot) from “Drop Dead Diva,” who is sort of, in a weird way, a zombie. Plus, who else but PFC would put a pic from a weepy chick show in an article about flesh-eating monsters? The Internet is like a box of chocolates…

Given that the average cast member is well over thirty, the overarching story themes pertain to fears of aging, decay, and loss. Their situation can also be seen as a metaphor for the culture shock wrought by rapid changes in technology. While the folks in the show have had technology ripped away from them, those of us in the real world who are over 40 often feel like anachronisms who can’t keep up with the latest breakthroughs. For example, I recently read that, within ten years, CDs and DVDs will be gone. What? I like to hold music in my hands, thank you very much. How will the world produce classic albums when there’s no such thing as an album? Oh, and my blu-ray player needs to be connected to the internet. The internet? It’s got a tray for discs, goddamn it!

Stop this thing, I want to get off.

The Walking Dead even feels old fashioned, with its earnest, almost corny respect for authority and its conservative morality. Not so for basic cable’s other horror show, American Horror Story, where violent revenge is sweet and indulgent and every lurid element draws the viewer further down a steep, twisting waterslide of perversion. Just like inside my head!

When I wrote about the pilot episode here two weeks ago, I said something along the lines of, “I’ll check it out one more time. Maybe.” By the time Wednesday night rolled around again, I was doubled over with cramps, clawing the veins on my forearms open. Episode two was rather less spastic, though still gory, but this past week’s tale has turned me into a full-on junkie.

By now we are starting to learn the characters’ dirty secrets… and we are rooting for them to get away with whatever horrible acts they’ve committed. Dylan McDermott’s Ben Harmon is deep in shit on so many levels, but his Freddy Krueger-like stalker (Denis O’Hare) is turning out to be a bit of a guardian angel as well. Or more like a guardian devil who makes problems go away. Meanwhile, his wife Vivien (Connie Britton) experiences an untimely vaginal hemorrhage (not that there’s a good time) while wearing light-colored pants. And the maid…

More maid pics, please, Ms. Breckenridge. It's not just you, it's your feather duster.

There’s got to be a French or German word for when a minor character in a show unexpectedly captures viewers’ imaginations in a way that the producers did not anticipate (make one up if no such word exists). Moira, as I wrote a few weeks ago, is a dour hag to everyone but Ben, who sees her as a sultry vixen. After only getting one paltry half-second shot in episode 2, she was back in force and totally owned this third installment. Alexandra Breckenridge, who plays her, is a lovely woman but hardly destined to be a legendary beauty. However, when she puts on that black outfit and does that wink and the sashay while waving her duster… you will want her to clean your house too, even if she is an evil, undead, murderous succubus. Hell, that’s all the more reason to invite her over.

The only thing missing from American Horror Story that could make it more trashy and fun is Lindsay Lohan, who is currently having her own run-in with corpses while she does community service at a morgue in L.A. (not sure how that helps the community, but whatevs). My dear Lindsay: Getting arrested all the time might be free publicity, but so is early death, which is where you are headed if you don’t get your shit together. The walking dead isn’t just the name of a TV show. It’s a metaphor. 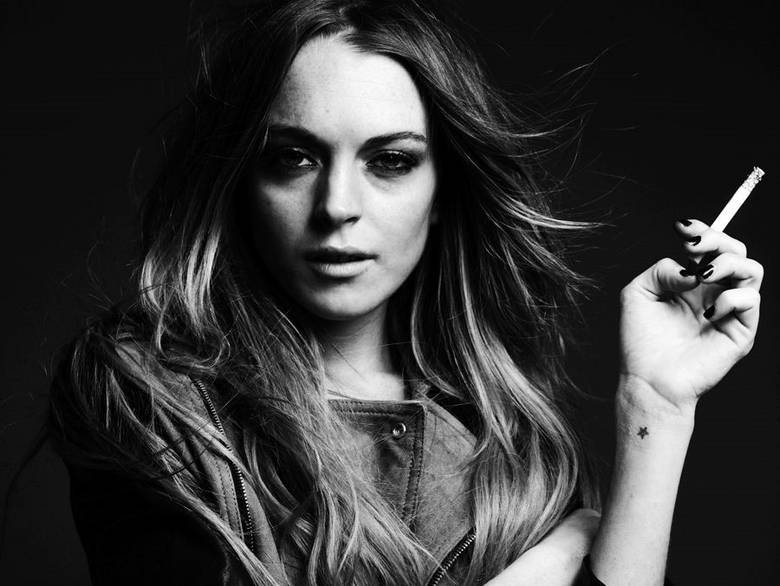 *How much do you want to bet that Killough comments after this article, “You know, Baker, that Elizabeth Harnois is a raging shrew. I’d never work with her.” Yeah, I get it, James. Actresses are stuck-up bitches. That’s still not enough to make me switch teams, youknowwhatimsayin’? Keep trying though.

The Once and Future Thing