Like people who eat nuclear-grade hot wings or force themselves to watch entire episodes of Whitney, some moviegoers like to be permanently damaged by their entertainment choices. It’s not enough to jump at scares or be repulsed by bloodshed. They want to walk away disturbed.

Disturbing movies are those that challenge you to keep watching and sometimes make you feel grimy when you do. I’m not talking about the cartoonishly sadistic violence of Saw movies and their outlandish set pieces. I mean the ones that stay with you for a long time (kind of like your wife’s relatives from overseas). 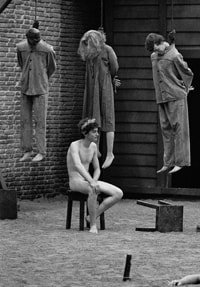 A sedate moment from Salò.

Pier Paolo Pasolini’s Salò: 120 days of Sodom (1975) is probably the most notorious “disturbing” film, with the bulk of its running time devoted to the unrelenting torture and sexual degradation of a group of teenaged kids at the hands of their fascist captors. If the intent was to make the viewer feel complicit in the abuse through passive observation, well done. Still, it’s not my name in the credits, is it?

Before streaming video and Amazon.com made access to such films easy, a subset of horror movie collectors considered it a quest to track down the most disturbing flicks ever made. Some titles, like 1976’s Snuff, turned out to be limp drivel. Others, like Cannibal Holocaust (the original “found footage” horror movie), deliver on their heinous promise. The latter film offers ample opportunity for the viewer to wonder why he keeps watching, including a sequence in which a woman is raped by a stone dildo and then hemorrhages to death from her crotch. The film’s director, the soft-spoken Ruggero Deodato (what is it with you Italians?) has long been accused of using real corpses in some scenes, though that could very well be an act of subversive marketing.

So anyway, people are still making movies to disturb. I finally caught up with one of them, last years’ controversial Megan is Missing, which is yet another “found footage” movie pretending to be assembled from webcam recordings and camcorder tapes. Director Michael Goi’s tale concerns two teenage girls, Megan and Amy, who, through a chat room encounter, meet “Josh,” a boy claiming to be from a nearby high school. But, as you’ve probably guessed, he already graduated. Like, in 1993. 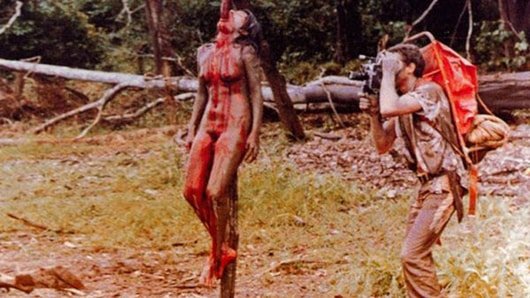 Cannibal Holocaust: As repugnant as it sounds.

The film aims to disturb in two ways. The first, especially for parents of teenage girls, is the peek into the young protagonists’ unsupervised lives. The girls’ graphic discussions of sex border on verbal pornography, and depictions of substance abuse are rampant. Not to be forgotten is a scene of 14-year-old Megan trading a blow job for drugs at a house party.

Jeez. When I was 14, I was still trading comic books for other comic books.

The second way Megan is Missing disturbs is through violence, such as when “Josh” films himself raping 13-year-old Amy. What follows is reputed to have made people storm from screenings and has several Amazon reviewers calling for director Goi’s arrest (interesting how people fear socialism yet embrace fascism, eh? The film is a work of fiction). 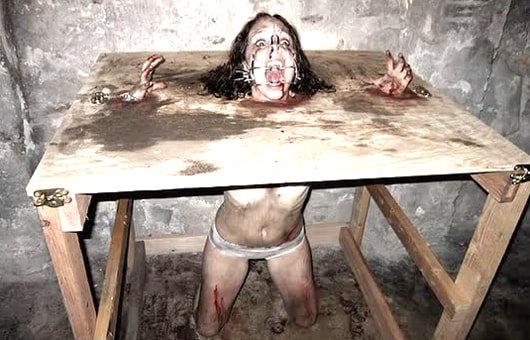 Did I mention that some people find “Megan” to be disturbing?

Detractors of “disturbing” films typically call for the banning of the film and criminal charges against the filmmakers, while defenders typically claim the movies offer a critical social message. Both of these views are probably nonsense. Sure, maybe Salo is about the evils of government oppression, but do I need to watch a teenage girl eat human shit to understand that point? Perhaps Megan is Missing is a cautionary tale of what happens when parents fail to stay involved their children’s lives. I think it’s more likely a business tale about what happens when a filmmaker says, “What can I film that is cheap to make and shocking enough that I will get tons of free publicity?”

And more power to him for that. The actresses aren’t really 13, no one was hurt, and people got paid to make a movie. Which is better than trading blow jobs for drugs. Or comic books.

None of these films is as disturbing as the dazed, emotionless expression Katie Holmes has worn on her face these past five years. Her soon to be ex-husband was jumping up and down on famous couches like a hyperactive child to profess his love for her, while the object of his affection seemed in a drug haze, like that guy on the episode of Star Trek with Nazis. You know the one. 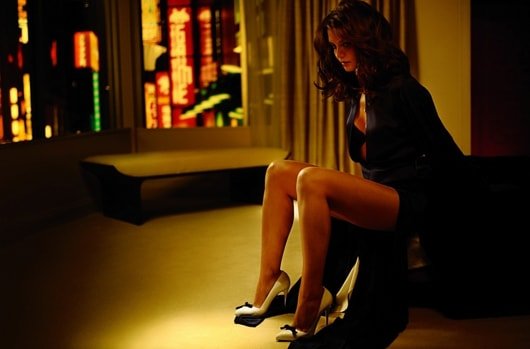 Hey, Katie. In the world of secular humanists, you can wear flats.

I’m not saying Scientology had anything to do with her hypnotic state, but maybe she got mixed up in some weird cult with bizarre belief systems and financial requirements that many legitimate medical and psychological associations have labeled as harmful. A weird cult like that might even use sedatives to control resistant people. But then, one day, a mix-up occurs, and someone forgets to sedate the beautiful wife of the cult’s figurehead. In a moment of lucidity, the woman realizes she has been under their control all these years and, fearing for her future and the future of her children, she pretends to keep taking the sedatives while secretly plotting her escape.

That would make a cool movie. Oh, you know who should play the woman? Katie Holmes. 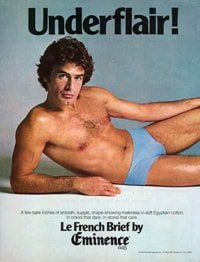 You think actresses becoming zombies and movies that show people eating poop are bad? How about this quote from Supreme Court Justice Antonin Scalia? After the court struck down most of Arizona’s racist anti-immigration law (though not the worst part of it) last week, he said in his dissenting opinion that the “federal policies of nonen­forcement will leave the States helpless before those evil effects of illegal immigration.”

I’m more worried about the evil effects of Antonin Scalia, frankly. This is a guy who thinks the law of the land in 1787 – when slaves were slaves and women couldn’t own land or vote – was just peachy and that multi-billion-dollar corporations are people. Because, like corporations, people have huge marketing departments and don’t die of old age.

The Tom Cruise Guide to Gay Sex in Your 50s