You may know that Tate was murdered in 1969 by Charles Manson’s gang and that Polanski went on to perpetrate a sexual act against a 13-year-old girl in the mid 1970s. When it comes to sex with a minor, the shock factor is like a reverse Richter scale based on how many years she’s been alive. If she’s got a driver’s license, it’s like, “Dude, what’s wrong with you? Find someone your own age.” If she’s close to getting her driver’s license, it’s like, “Dude, what the fuck is wrong with you? What if her dad finds out?” When she’s 13, you just back away slowly, because you don’t want to be sucked into your friend’s vortex of scandal, criminal charges, and exile to France (or the Vatican, where a 13-year-old sex partner is considered over the hill).

Brett Ratner and his girlfriend, Alina Pascau. It's a given in the film industry that many hobbits, orcs and Gollums become directors just to get laid.

So anyway, Killough says the mere fact that someone is a movie director makes him alluring and attractive to people. And I have no choice but to agree, for I’ve been feeling the fanboy tingle lately.

Biologists have identified three types of movie fanboys (so far):

Today’s blog is about type 3 fanboyism, with which I am mildly afflicted (I’d rather talk Cronenberg than Cruise, though I’d pick Rosie Huntington Whiteley on an island, deserted or otherwise, if I had a choice of the three). And nothing gets us fanboys buzzing faster and harder (zoinks!) than… wait for it… a… a… new Quentin Tarantino movie.

Oops. Excuse me a moment while I go change my shorts.

Django Unchained, Tarantino’s tribute to the spaghetti westerns of Sergio Leone, hasn’t started shooting yet and the internet is already cackling, especially now that Jamie Foxx is (allegedly) on board with (allegedly) Leonardo DiCaprio as The Bad Guy and (allegedly) Christoph Waltz as The Good Guy. I already know for a fact this movie is going to be super wicked excellent, but, then, I’m a pro-Tarantino fanboy, standing in direct opposition to those fucktards who don’t know shit about movies and are clearly on the payroll of Tarantino’s bitter rival Uwe Boll (i.e., people who happen to have differing taste). 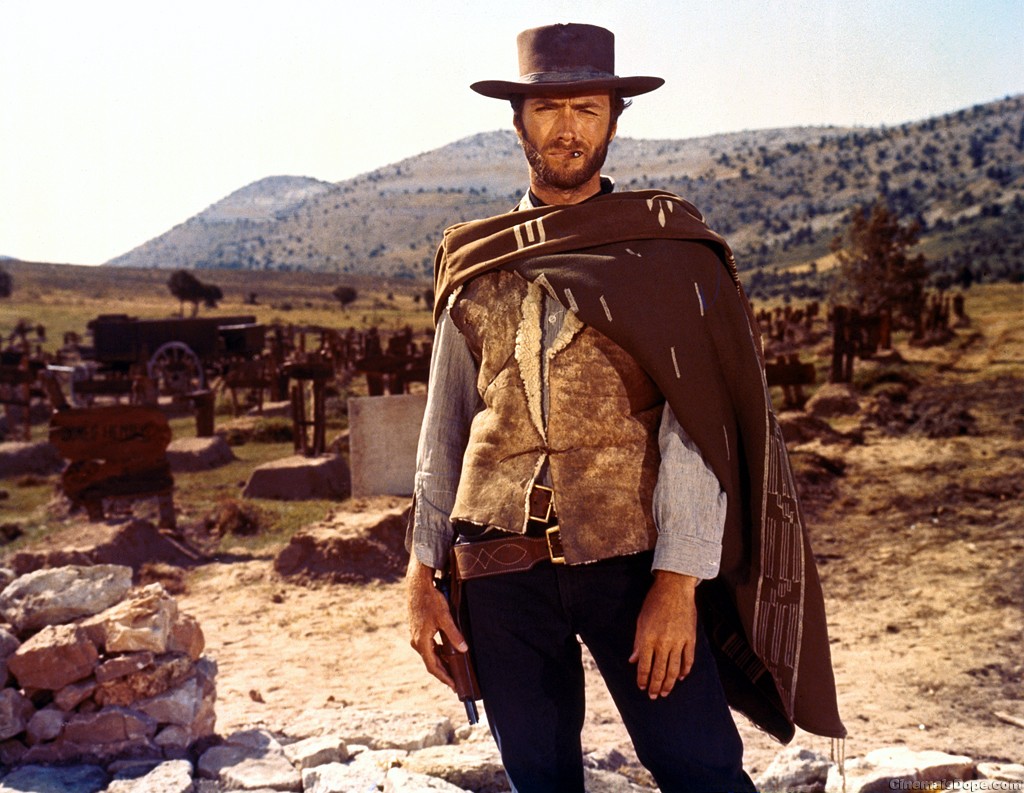 No, this image didn't wander over from one of Tuttle's men's fashion pieces. It's Eastwood in Sergio Leone's most famous movie, "The Good, the Bad, and the Ugly."

Tarantino’s detractors say his scripts are self-indulgent talk-fests full of dialog wanking. They also say his films are laden with sequences and subplots that do nothing to advance the story and, for that reason, are in violation of the fundamental tenets of storytelling. And what of the anachronisms, like putting a David Bowie song in Inglourious Basterds, a World War II movie?

All those complaints are valid. But if the movie works, who cares? What gets me jazzed about his films is that I never know what’s going to happen next. People bitch about movies sucking these days for various reasons, but isn’t the utter predictability of storytelling at the root of it? For instance, I already know what’s going to happen in Transformers: Dark of the Moon, without having seen the trailer: Sam thinks his life is back to normal. But then some secret whatever from the past brings back the bad robots. Sam will try to run away from his problems. Optimus Prime will make a self-righteous speech. Things will explode. Sam will come through in the end. The bad robots lose. Roll credits.

I recall sitting in the theater in 1994 watching Tarantino’s Pulp Fiction and thinking, this guy is the new Stanley Kubrick. I don’t think that’s going to happen to anyone watching the Green Lantern or Captain America. So, yeah, Django Unchained might turn out to be an 1880’s western with a surf music soundtrack and characters saying, “Motherfucker” a lot, but the story will take you places you were not expecting to go. Isn’t that’s what a good tale does?

Woody and Mia. The prosecution rests.

He’s no longer able to take us to amazing places, but former critics’ darling (and Polanski defender) Woody Allen has yet another watchable but innocuous film in theaters this month, Midnight in Paris, which I saw a few days ago. After a tedious pre-credit sequence showing scenes of Paris streets and buildings from dawn through dusk (meant to evoke impressionist paintings, I believe, but the repetitive jazz score was grating. If you’re going to go all Koyaaniqatsi on us, you’d better get Phillip Glass or people will start throwing skittles at the screen), we are introduced through clumsy expository dialog to would-be novelist Gil (Owen Wilson), who is engaged to a rich bitch (Rachel McAdams). Along with her obnoxious parents, the couple is staying in Paris for vague business reasons. The others inexplicably hate France with everything they’ve got, but Gil falls in love with the city and fantasizes about Parisian life of the 1920s, causing much head shaking and eye rolling amongst the other characters. Also in town is a Paul, a rich, pedantic asshole (and stock Woody Allen character) who dazzles the shallow fiancé and makes the wimpy hero feel even more inadequate. Roaming the streets at midnight, lost and uncertain of his future, Gil accepts a ride from a gang of strangers who pull up in an antique car.

Here’s where I ruin the surprise for you: Midnight in Paris is a time-travel movie, an unexpected turn that quickly raised my internal tomato meter, which had been stuck on 50 since the movie started.

After his suicide attempt, a picture of Owen Wilson walking this close to the Seine makes one jumpy.

Side note: On rottentomatoes.com, why do good films (like Kung Fu Panda 2, for example) get red tomatoes and bad ones get green tomatoes? Green tomatoes aren’t rotten, they just aren’t ripe yet. And how can you attach a number score to a movie based on ripe and unripe tomatoes? The Lord sure works in mysterious ways.

Anyway, the antique car takes Wilson back to 1920s Paris, where he falls in with F. Scott Fitzgerald, Gertrude Stein, Hemingway, and their contemporaries, meets the girl of his dreams, learns lessons, and doesn’t notice everyone has bad breath. Midnight in Paris becomes much livelier and engrossing here, with great bit parts by Kathy Bates and Corey Stoll, and the 21st-century sequences become funnier by contrast. Question for Woody Allen though: Could you be more in love with Rachel McAdams’ ass? Not that I blame you, but, artistically, was it necessary to linger on her backside so long when she was stuffing that suitcase in the car? 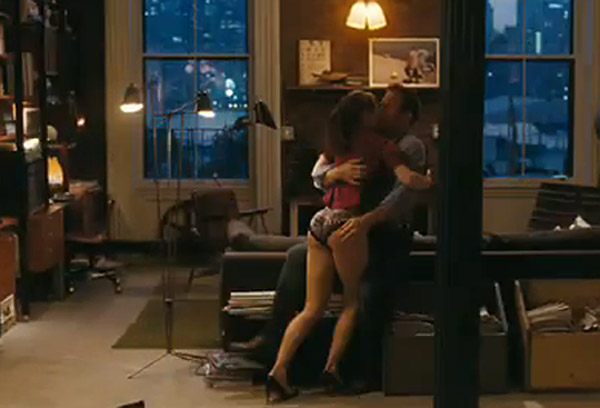 The film has a few more twists that allow for the appearance of famous Frenchmen from earlier times, including the Post-Impressionist (or Symbolist) painter Paul Gauguin, who lived every man’s dream: He ditched his nagging wife and bratty kids, quit his boring job, and moved to the South Pacific, where he painted famous artworks, slept with teenage girls, and gave everybody syphilis. That’s how the white man leaves his mark on the world!

Gauguin’s artwork, like that of other post-impressionists, is complicated. It is enough to say for today that his un-modulated swatches of color, separated by lines in a way that is strangely akin to stained glass pieces being separated by metal tracery in a church window, had a huge influence on 20th-century artists, particularly those who practiced fauvism and expressionism, such as Henri Matisse.

Above, in Spirit of the Dead Keep Watch (1892), Gauguin depicts his Polynesian lover, Tehura, lying in apprehension as the spirit of the dead inches ever closer, hoping for a little grab-ass before the sun comes up. Gauguin said in his journal that she was afraid of the Spirit, but maybe she just thought it was kinda gross that her 43-year-old lover was 30 years older than she was.

Yup, Tehura was 13, but nobody seems to hold that against the man. Pssst, Polanski… maybe you should have been a painter.