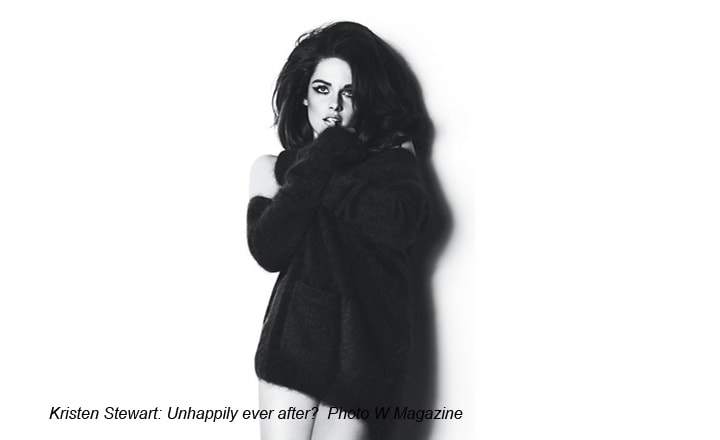 Kristen Stewart’s critics aren’t wrong: When she isn’t being plain old bland, she’s being morose. She’s not an exotic beauty, nor is she the all-American girl next door. Yet still she manages to captivate us. Maybe it’s that half smile she gives up about an hour into every one of her stone-faced performances. It’s like we’ve been given a great, unexpected gift. And the occasional twinkle in her eye would be a full-frontal nude scene from another actress.

Stewart brings her weary good looks (imagine her in a movie with Ben Affleck called Pretty, Tired People) to the role of Snow White in Universal Picture’s Snow White and the Huntsman, which opened this weekend. This Tolkien-esque take on the familiar fairy tale involves a serial usurper named Queen Ravenna (Charlize Theron) who, like me, needs beautiful women around to feel young. However, whereas I am satisfied with a charitable smile or the occasional act of harmless flirtation, Ravenna sucks the life right out of these girls.

Hemsworth is occupying a lot of screen space these days.

Her ticket to immortality is Snow White, the rightful queen, whom she keeps locked in the tower (you know, the rickety one with noisy radiators and faulty wiring). But when time comes to cut out White’s heart, the plucky prisoner escapes and flees into the dark forest, where she runs into Princess Buttercup and the Dread Pirate Roberts. Oops. Wrong movie. I meant to say she runs into a lot of digital effects.

Few have seen the dark forest and survived. One of those few is the world’s hunkiest bitter old drunk, The Huntsman, played by Chris Hemsworth, who trades his Thor hammer for a battle axe in his quest to conquer the box office this Spring. Ravenna employs his services to hunt down Snow White, which he does, and if you don’t think he falls for White when he finally does catch her, you’ve never seen a movie.

The pair then set off on a quest to restore the kingdom, which brings them into contact with ogres, fairies, enchanted forests, mythical reindeer, poison apples, and, of course, seven dwarves, one of whom is played by the hilariously awesome Nick Frost, the most physically unattractive guy I’ve ever had a mancrush on.

Maybe it was Lord of the Rings-trilogy burnout, but since the credit roll at the (eventual) end of Return of the King, the very thought of swords, quests, and castles has conjured emotions in me similar to those evoked by pending abdominal surgery. These days, movies featuring medieval knights on horseback can make a guy look at his watch a few times, you know what I mean?

A big round of applause, then, for director Rupert Sanders and gang, who put together a visually captivating film with the magical quality that has been missing from the fantasy genre since Peter Jackson last made his mark on it. Readers of Brothers Grimm and other storytellers of ages past know that the original fairy tales are nothing like the 20th century Disney depictions but are rather dark and violent, and Snow White and the Huntsman is suitably gruesome in that regard. And in an era when every weekend brings a new film full of CG beasts and robots, Snow White’s impressive digital menagerie is a noteworthy accomplishment.

As usual, Stewart does not render a particularly likeable character, but her anti-charisma has its own dark energy that draws the viewer’s eye whenever she is on screen. Co-star Hemsworth isn’t known for his acting chops, either, and he has little more to do than he does as Thor in the Marvel Comics films, which is to toss off one-liners and fight monsters. Still, he has the likeable quality of a summer movie hero. His Huntman’s “I ain’t got time for dames” attitude is old-school charming, like in a 1930s adventure film, and you can’t help but feel good when he finally gets to kick some ass.

A pleasant surprise was seeing British actress/model Lily Cole in a small part as Snow White’s fellow prisoner toward the beginning of the film. Cole has one of the most fascinating faces in the movie business, and here’s hoping this film leads to bigger parts. If Pixar ever decides to do a live action version of the upcoming Brave, the one about the round-faced archer with red hair and big blue eyes, Cole wouldn’t need to audition.

Snow White is not without flaws, the primary one of which is way too much story for the two hour runtime. Perhaps it’s because of modern audiences’ miniscule attention spans, but each character’s driving motivations are revealed in perfunctory fashion though one or two lines of expository dialog. For example, The Huntsman is a bitter drunk, we learn from a five-second clip of conversation early on, because his wife was killed. This does not come up again or have any bearing on the story until much later, when one of the villains says, “Oh, by the way. I’m the one who killed your wife,” at which point that villain is summarily dispatched and the story chugs along as before. Inigo Montoya’s hatred for the six-fingered man, it is not.

Speaking of villains… Charlize Theron, one of the more ravishing wicked witches to ever flicker across a movie screen, is OK but hardly great. She plays the role big, as it should be played, but big to her is not fun scenery chewing but a lot of screaming. I’m not a fan of shout-and-scream acting, because there’s always a better way to convey wickedness or anger. It’s like she’s playing a cross between Countess Elizabeth Bathory and herself when dealing with personal assistants, nannies, and the other human insects that are an unfortunate necessity in an A-list actress’s life.

Theron has a little quiet “me” time after all that screeching.

Nevertheless, Snow White and the Huntsman succeeds on the strength of its sumptuous visuals and its surprising ability to connect emotionally with the audience, the latter quality of which is typically lacking during blockbuster season in recent years. On the Chris Cramer scale, I give it a 67/100. Look at the line below to see what that means in the artsy, devil-may-care, live-in-the-moment world of James Killough.

Eric rates Snow White and the Huntsman as: