Why Did They Cancel the Leper Hockey Game?

Answer: There was a face-off in the corner.

Never mind that leprosy doesn’t make body parts fall off. Think about this: What if you wanted to visualize the above joke in cinematic form? In what may be my most appalling segue ever… you could hire the eventual winner of Syfy channel’s special make-up artist competition show, Face Off, which returned to the air Wednesday night for its second season debut.

McKenzie Westmore being transformed by Mahakali.

Hosted by actress McKenzie Westmore, who is descended from a long lineage of Hollywood special make-up veterans herself, Face Off is equal parts Project Runway and Fangoria magazine, with 14 contestants of various professional and amateur make-up and body-painting backgrounds competing for 100K and other prizes.

The stock characters that show up in like-minded reality competitions are all here: The arrogant, bossy veteran who thinks everyone else sucks; the airhead who doesn’t really do anything yet somehow manages to stick around for 2/3 of the season; the eccentric with limited ability but a personality too interesting to eliminate; and, my favorite, the hysteric who goes bipolar in the interview segments. The later role is filled nicely by Sue, a pretty Asian woman who takes herself too seriously and is destined for a major meltdown by episode 3. 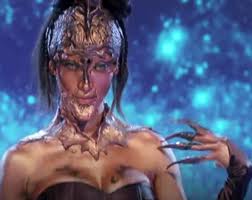 The winning witch design showed less technical skill than others.

The first major challenge was to recreate the main characters from Wizard of Oz (via special make-up designs applied to models and paraded before industry-insider judges, hence the Project Runwaycomparison) but in an edgier, more modern way. The two teams of seven were divided by gender, and the men, predictably, chose to go with a horror theme, creating a foursome that resembled low-rent creatures often found in direct-to-video monster flicks. To be fair, they only had two days to conceive, sculpt, mold, paint, and apply the costumes.

The women emerged victorious – despite ignoring the instruction that their characters be stylistically cohesive – based on the alleged strength of their steampunk Wicked Witch. I thought it was the worst thing up there and looked like a bronze crayon wearing a helmet, but I guess that’s why I’m not a judge in a special make-up effects competition.

In fact, I’m surprised such a show exists, as interesting as it is. I thought special make-up was nearly extinct, thanks to the ubiquity of CGI. Heck, even Benicio del Toro’s The Wolf Man remake used CGI monsters, and werewolf movies used to be the most razzle-dazzle showcases for practical effects in all of cinema. Yet here are a bunch of talented folks, some of whom have been to special make-up school, with dreams of working in Hollywood on genre films.

To most people, make-up artists are simply part of the technical crew on a film. To genre fans (who live in an alternate universe) these guys are rock stars. Going back to the early days of film, relatively anonymous artists were responsible for some pretty iconic images (think of Jack Pierce’s Frankenstein monster with the flat head and neck bolts), but Dick Smith made such a splash – of green vomit – with his shocking creations for The Exorcist (1973) that genre stardom was inevitable.

By the time Rick Baker’s Oscar-winning transformation sequence in An American Werewolf in London hit movie screens eight years later, horror films had evolved into a series of set-pieces built around showing off the effects spectacle, just as a musical’s often excruciating back story serves as an excuse for production numbers.

David Emge gave the most authentic zombie performance ever in “Dawn of the Dead."

The biggest cult hero of ‘80s horror was Tom Savini, the make-up artist behind the seminal films Dawn of the Dead and Friday the 13th. He was a punk-rock, one-of-our-own artist whose anatomically correct mutilations were as likely to cause shudders as exclamations of “Cool.” Most of his slasher films were otherwise artless drivel, but his work sets them apart from their ilk on that one level at least.

1981’s The Prowler is an exercise in tedium – except for Savini’s set-piece killings, one of which still disturbs today: As a young man waits for his girl to finish her shower so they can partake of a little in-out, he unexpectedly experiences his own penetration in the form of a bayonet rammed into the top of his head and down through his jaw. When the killer angrily yanks the blade up to pull it out, the still-living victim’s eyes open wide and roll back… and it looks like something went terribly wrong on set and the guy bit it for real. Horror movie fans typically identify with the killer in such films – studios and fans alike know a good slasher film is a party – but this shot is genuinely horrifying. Nicely done, Savini. 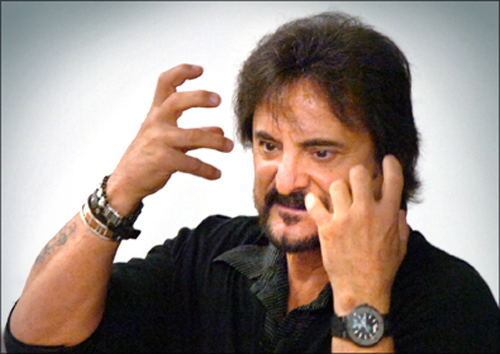 The passion of Tom Savini

Special make-up even gave horror fandom its own Brangelina, briefly, when effects artist Steve Johnson (Species, Cat in the Hat) married diminutive scream queen Linnea Quigley, who is most famous for her role as the punk-rock zombie “Trash” in the fan-favorite Return of the Living Dead (1985) but also appeared in dozens of lesser horror and soft-core flicks well into the last decade, often sans clothing. Rumor is that they met when he did a body cast of her for the 1988 crowd-pleaser Night of the Demons. The marriage only lasted two years, which might be the unfortunate side effect of her having to do graphic sex scenes with other men all the time. I’m speculating about that, but seriously, if you meet your future wife the same day you are slathering alginate all over her tits, your romance is probably doomed from the start.

Quigley's truly fake breasts, as in prosthetics, not the usual Hollywood kind.

Nowadays they use CG blood, which looks fake and is thousands of times more expensive than mixing Karo syrup, red food coloring, and flour. And, while we’re on the subject, computer-generated beings seldom convey mass or weight, and the surface textures don’t react properly with the set lighting. On the other hand, CG monsters give filmmakers a lot more freedom, since directors don’t have to shoot around stuntmen’s feet or limit their shot blocking because some creature-holding rig is in the way. An example is the 1982 version of The Thing, which used practical effects and was never able to show the creature in full, versus last year’s remake/prequel, which had the creature running and flipping.

Ah, but the new Thing sucked and the old one is brilliant. I’m not blaming modern technology, but I am implying that click-and-drag filmmaking makes people lazy. People gluing together thousands of tiny parts to make the imperial star destroyer in Star Wars showed painstaking effort, and such effort is a key component in artistic passion. It is apparent in the end result.

These Face Off contestants have that passion, like their counterparts on Project Runway and Top Chef, which makes skill-competition reality series more enjoyable than some freak show about people who haven’t cleaned the kitchen in 27 years or some attention whore who relentlessly exploits her fertility-clinic-induced brood of brats just to get her soulless mug on television. You may not be a genre fan, but you have to respect the combination of imagination and technical prowess that earned these folks a few minutes of reality TV face time.

This week’s brunette is, oddly, blond, though something tells me we’re not looking at Keri Hilson’s natural hair color. Notice her perfectly shaped head and flawless face. No need for special make-up effects here (though a little Photoshopping never hurt anyone’s complexion):