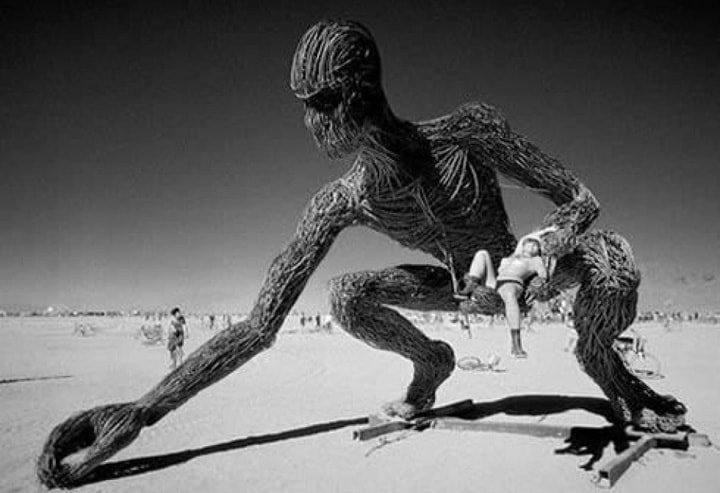 It’s that time of the year again: Burning Man 2012 kicks off today in the temporary Black Rock City in the desert of Northern Nevada.  Once again, we won’t be attending, despite always have every intention of doing it.  We’re there in spirit.

Truth be told, the only reason we haven’t gone is we lack the resources to put ourselves up in the style to which we are accustomed without being inconvenienced in any way, which would require at least three RVs: one for us, one for the staff, and another for the kitchen.  A private jet to the closest airport would be nice, too.  Also, it is very difficult to get a ticket these days even if we could afford our creature comforts: scalpers are asking for over $1,000 per ticket right now.

Before we launch into a dry summary (so to speak) of what Burning Man is—which we will do despite the fact most of our readers already know all about this annual “human extravaganza”—we thought we’d remind you of the wonderful video interpretation of Dr. Seuss’ Oh, The Places You’ll Go released on YouTube last year.  It sums up the spirit and aesthetic of the event, and features a few gorgeous, interesting people with whom we wouldn’t mind getting stuck in the desert for a week.  We’d even supply the drugs:

According to Wikipedia , Burning Man started in 1986 as a gathering of Wiccan-ish friends who burned an effigy of a man and his dog.  Over the next twenty-six years, it evolved into the true extravaganza it is today.  A week-long living Whitmanesque paean to the spirit of creativity, it is one of the more powerful, enduring legacies of the Great Social Revolution of the 60s.  And we hope it never dies.

This year’s festival is themed Fertility 2.0 , which is appropriate seeing as it has spawned so many attendees that an application had to be approved for an additional 10,000 for this year, allowing for a total of close to 70,000.  That’s a long way from the twenty odd who participated in the first event. Aerial View of the temporary Black Rock City. Every scrap disappears after the event.

Just so you can fit in and not be such a newbie, here’s what you should know before stepping out of your deluxe RV in Black Rock City and your assistant opens the Chinese fringed parasol to shade you from the sun:

As with all freewheeling, anarchic events worldwide, there are lots of rules and regulations, which you may explore further HERE.

We asked our very own photo editor, Lord Google of the Image, to select some of His favorite pictures from Burning Men of the past.  Here is a slide show: