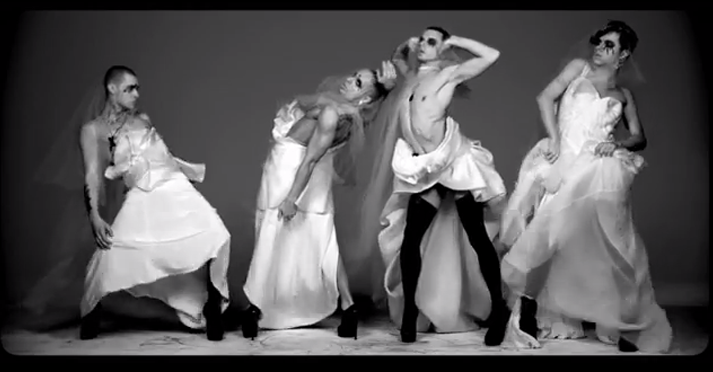 Not merely “camp as tits,” as they might say in a pub in the UK, Kazaky deliberately play with gender norms by regularly appearing in stiletto heels.  Comprised of Oleg Zhezhel, Artur Gaspar, Kyryll Fedorenko and Francesco Borgato, the group takes its name from the Ukrainian work for Cossack, although they disavow having anything to do with those bloodthirsty, warmongering thugs on horseback of lore.

Having watch a few of their videos on YouTube, they remind us more of the old Saturday Night Live recurring parody of a German TV show starring Mike Meyers, Sprockets.  But in a really good way.  With better black latex, fiercer moves and smudged smokey eyes makeup straight off the glamazons from Jerseylicious.

The lyrics of the song sound like something a young Ghey might write on the bathroom mirror after a long weekend at the clubs.  Check it out.  As Dieter used to say,  “Now is ze time on Sprockets vhen ve dance!”

Thanks to Diane Pernet for this.