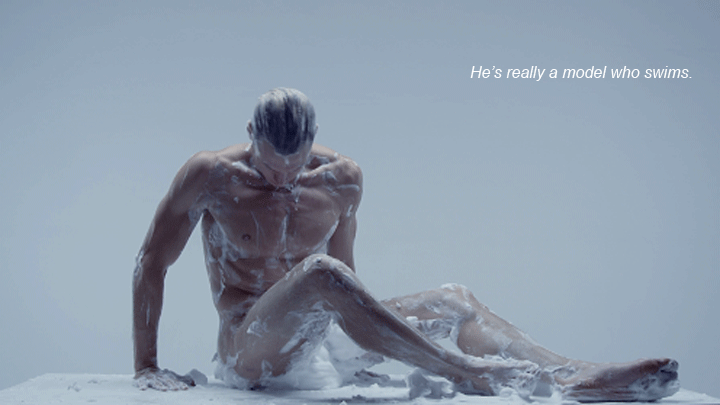 At PFC we try to bring you a different angle on the Olympics. We’ve featured the future in Rio, we’ve slammed the opening ceremonies and the uniforms, we’ve showed gymnasts as gay 70s go-go boys (not a stretch, pun or otherwise).  And now we bring you a swimmer shaved head to foot.

We picked up this piece by Bart Hessfrom on Diane Pernet‘s site, ashadedviewonfashion.com, but it is originally from Nowness.  So we’ll be lazy—it is nearly 3 AM PST—let them speak for the shoot:

The seductive curves of a toned figure are slowly unveiled by the ultimate seamless shave in designer, animator and photographer Bart Hess’s sleek new film. Inspired by the aerodynamic forms of swimmers currently battling it out in the Olympic pool, Hess was aided by a pair of human shavers manipulating a two-meter-long blade in turning a mechanical act of grooming into a strangely hypnotic performance.

“What is important to me in my work is a sense of estranging,” admits Hess, who added the white bar in post-production to compound the uncanny feel of the film. “I want to show the spectator an image that may not be recognizable right away… Normally within my work I am looking for the limits of a material, but in this film I was looking for the limits of the shaving ritual by scaling it up to include the whole body.”

All this talk of shaving bodies with two-meter-long blades makes us hope the model-slash-swimmer was already circumcised before the shoot.  We would also like to know where all these fashion films get their de rigueur, achingly chic industrial soundtracks from.  We’re not sure if we’d prefer it they went back to boom-boom Lady Gaga or not at this point; it does sometimes remind us of Ab Fab parodies.