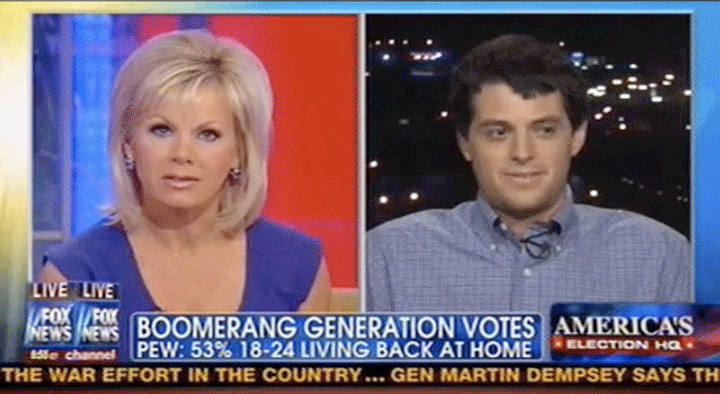 When we do the morning rounds of the websites to see what they’ve gleaned that might be humorous and newsworthy, Uproxx.com is always one of the first we check into.A sort of TV watchdog for bros who love the same shows we do—i.e., Breaking Bad and, well, Breaking Bad—the site delivered this morning by showcasing America’s “new hero… some random recent college grad named Max Rice.”

Despite being the most watched cable news show, Fox News is a soft target: so evil, so kitschy, cast with Disney-animated villains whose comeuppance you expect any day, but it somehow never quite realizes itself.  They just sink deeper into more evil and more kitsch.

Cajun Boy is one of our favorite writers on Uproxx, not least because he comes up with PFC-like monikers for public figures, like calling the hosts for the morning show Fox & Friends “folksy raw vegetables.”  Earlier today, they made the delightful misstep of having Max on as an example of a disenfranchised young college grad who had just moved out of his parent’s house, and was still unemployed.  Having voted for Obama in the last election, he will ostensibly be casting his vote for Romney.

Given that Max had the balls to punk the most shameless Obama-bashers in the world live on TV, we doubt that’s likely.  Take a look (more after the jump):

Cajun Boy managed to contact Max and got his take on it:

Rice said that the opportunity to go on national television “kind of fell into my lap” when “a friend of a friend” got a text message asking if anyone knew a recent college graduate who can’t get a job and is voting for Mitt Romney. “I’m like, hell yeah I’m a college graduate. Eff Obama!” he said. “20 emails later with the producer at Fox, they’re telling me what to say. It’s such bullshit. It’s so ridiculous.”

Rice told Raw Story that he in fact dropped out of college, but lied to Fox News about it just to see if they’d do their homework.

“The first thing that shocked me is that they were that desperate to find someone that fit that category,” he added. “What they were seeking is someone who voted for Obama in 2008, then somewhere in the last four years got disenfranchised and now is a huge Romney supporter…They were so happy that I fit the mold and that I was Caucasian,” he continued. “They were just casting a part in a show. They were so stupid. I’m a kid messing around.”

Max is an aspiring stand-up comic, from whom we might hear more soon. Read more HERE, where you can also watch his funny, glib high-school graduation speech.  The guy clearly has a dominant popular-and-likable gene.
______________________________
Uncategorized
By Pure Film Creative
0
0
2012 Presidential RaceCajun BoyFox & FriendsFox NewsMax RiceObamaRomneyUproxxYouTube