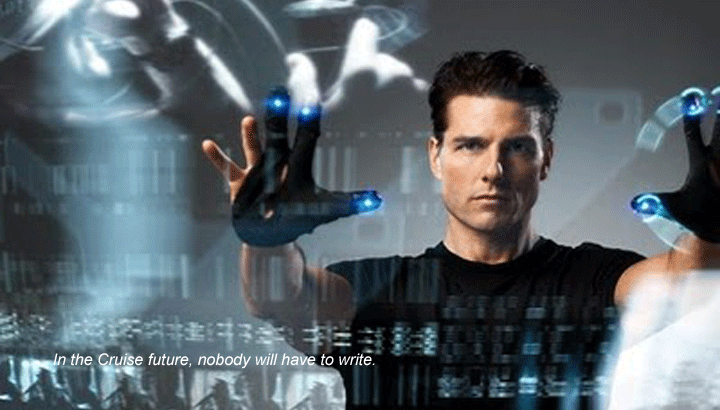 On Tuesday, we posted a spoof piece in which Tom Cruise gives gay sex advice to Anderson Cooper, which painted Cruise as barely literate. It seems we really hit the nail on the head.    But it’s sort of obvious: you’d have to be an idiot or insane or both to buy into Scientology (with all due respect to Paul Haggis, whom we assume was just insane until the Oscar win shocked him out of it).

Daniele Lattanzi, an operative in their propaganda department, sent out an email yesterday instructing Scientologists on how to force sites like Google and MSN to stop reporting on the TomKat split, now officially the greatest scandal ever to rock the Church.  The grammar is so appalling, the mixed metaphors so hilarious that it is almost unreadable—one almost feels sorry for the poor deluded creature. (In fairness to Daniele, his name does suggest he’s Italian, which explains a lot.  Still, maybe he shouldn’t be in communications?)

Well, I am not somebody that I am going to simply stand and watch a
bunch of uninformed people putting my religion under the carpet. So
here is a simple hatting on how you can causative fight back and at
the same time stand up and defend our religion on the internet.

Microsoft or Google or any of these big online company require that
each person when create an account with them follow a Code of
Conduct when they are on the internet. If there are abuse of such
Code of Conduct, those website do actually invite you to report the
matter to the Moderator — in other word, write the matter to
Ethics.

Read the rest of this stunner HERE.

However, it would seem that Lattanzi is merely continuing a tradition of sloppy communications begun by L. Ron Hubbard himself.  A quick perusal of his surreal creation story shows that his reputation as having been a “science fiction writer” is perhaps just wishful thinking on his part; it isn’t writing, it’s collage with words and disordered thought typical of a schizophrenic.  He was wise not to give up his day job as a religious charlatan, if that isn’t redundant.

The creation story is available upon payment of tens of thousands of dollars once you reach Operating Thetan Level III, or you can access it online for just a click right HERE.