‘Innocence of Muslims’: The Funniest Film Ever Made? 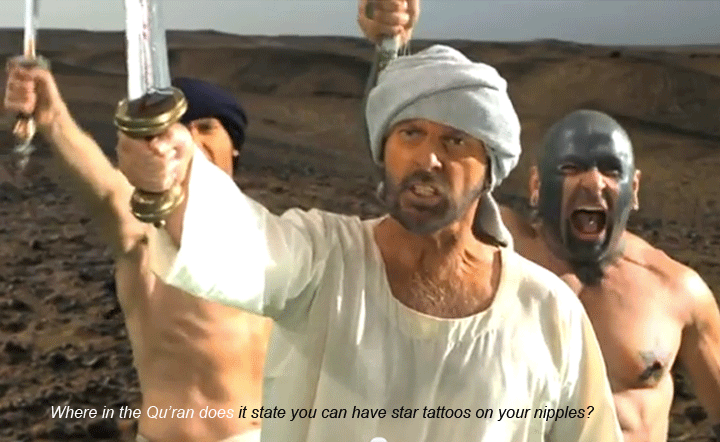 Before we share with you the outright hilarity that is, as of this writing, probably the most controversial film ever made, let us state categorically that what is happening in the Middle East as a result of this is not in the least bit funny.

What makes the assassination of our ambassador to Libya and other consular staff in Benghazi so much more senseless is that anyone anywhere would take Innocence of Muslims as being anything less than the dumbest, most insane, badly scripted, shittily dubbed, Z-list-acted piece of digital claptrap ever concocted.  It speaks volumes about the quality of productions they expect in the Arab world that this isn’t being spoofed and memed and giffed until not a second of it remains untouched by the scathing satire it deserves.

But rioting and attacking US embassies over this?  The whole scenario has gone meta by once again showing fundamentalists as what they really are: a bunch of demented, feral clowns with not enough sense to see how ludicrous it is to risk their own lives and limbs for something that made us all laugh so hard when we viewed it that we almost coughed up a lung.

To add an even more surreal spin, it turns out that writer-director Nakoula Basseley Nakoula is a meth cook, which makes perfect sense.  Unlike Walter White from Breaking Bad, he’s clearly toking on his own supplies, and long ago entered a parallel universe that made him think a movie like this made sense and was feasible.  He must be huddled in a corner somewhere freaking the fuck out.  Good. If only Einstein were alive, he could solve the Middle-East crisis.

We couldn’t possibly sit through the whole film even if it were available, although we hope once all of this calms down that Innocence starts playing at an underground midnight cinema somewhere, complete with audience members getting up in Biblical drag to recreate scenes.  In fact, we couldn’t even get through the full trailer.  It reminded us of desperate, crackpot “indie filmmakers” at Cannes peddling their awful movies made with their friends’ money, deluded that they can find worldwide distribution, which is the majority of the nearly six thousand films screened at the market every year.

Our favorite part of the 14-minute trailer that we were able to get through was a Coptic Christian father explaining to his daughter the equation that makes up a terrorist, complete with white board to illustrate his point:

FATHER (sits by daughter, meaningfully): “You need to discover it for yourself.”

We assume the writer had no clue where that train of thought was going and just left the ball in his daughter’s court like a dud land mine. Oh, tweakers.

Without further ado, we bring you the heaping pile of shite that is Innocence of Muslims, by Nakoula Basseley Nakoula, the auteur formerly known as Sam Bacile.