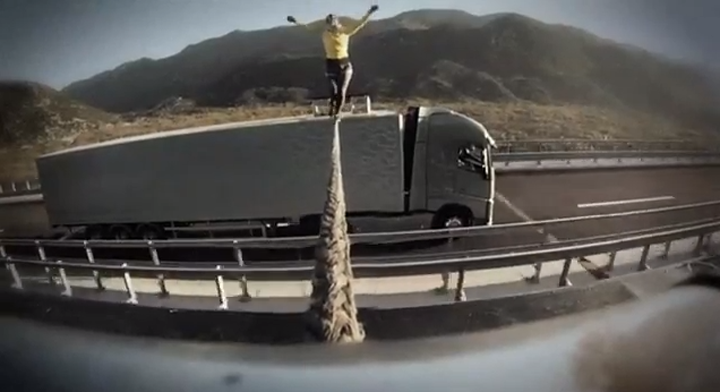 We always wonder what the stunt team are talking about as they huddle together away from everyone else at craft services.  Probably gossiping, just like all the other crew, except they’re not really crew, are they? They’re sort of hybrids of cast and crew.  Bionic cast.  Cast with rigs and cables attached to them, and special training and things that make them huddle away from everyone else talking about secret, macho things even if they’re girls.

Now we know what they think when they risk life and limb for a blockbuster movie in which their faces won’t even be seen: not much.  Nothing at all, in fact.

“I try not to let too much go through my mind,” says the appropriately named, world record-holding highliner Faith Dickey, before she battles in the wind to cross a line strung between two Volvo trucks speeding at 80 mph towards two tunnels in Croatia.

This video posted on YouTube by Volvo Trucks has gone viral — deservedly so: it is well shot, edited and does make you squirm.  Some of the comments under it are outraged: How could Volvo put this girl’s life in danger that way just to sell trucks?  We have a funny feeling she’d do it anyway; that’s the way these stunt people are rigged. And she’ll get a fatter paycheck for this by far—with her name on the ad, to boot—than she would standing in for Anne Hathaway in Batman.

Dear reader, we know you’ll be tempted once you see the video, but don’t try this at home.  Like, not even with two Tonka trucks, dental floss and a Barbie doll.