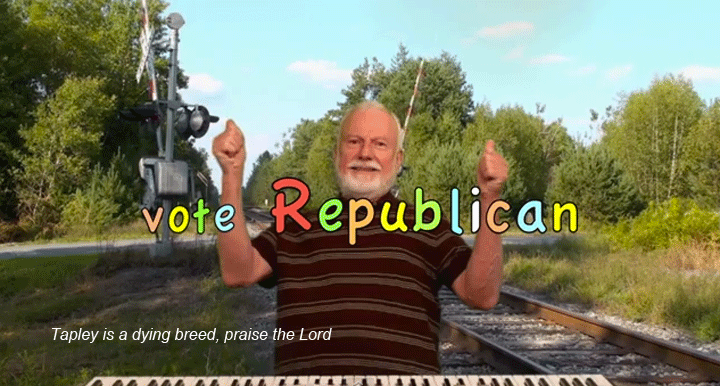 As long as we keep tabs on Cajun Boy from Uproxx, he’s bound to lead us to a treasure trove of silly goodies that will have us chuckling so hard our laptops might jiggle off our bellies, which would be a pity seeing as we’re on Mac and that shit’s expensive.  Today’s delight was the discovery of William Tapley, a classic end-of-days, Book of Revelations-wielding tub-thumper with his own YouTube channel, ThirdEagleBooks, which is just chock full of extra crunchy nuttiness.   The “About” section alone is enough to make you miss those “shouty crackers” schizos who used to ring Times Square pre-makeover:

About Third Eagle’s Prophecies And Warnings

My title “Third Eagle of the Apocalypse” came to me when I asked God who was the “Eagle” as found in Revelation 8:13. He told me: “you are”. Now, I should explain, I do not hear voices, but sometimes God gives prophecy to me by a revelation which I know comes not from my own thoughts but outside my mind. My title “Co Prophet of the End Times” means that I complete the end times prophecies of Daniel, Ezekiel, Esther, John and even of our Lord in the Olivet Discourse (Matthew 24-25).

We bring you not one, but two choice vids chosen by Cajun Boy from the Third Eagle catalog of extraordinary videos.  The first is his campaign song for Mitt Romney, which Cajun believes might be “the worst fan-made campaign song ever.” Take it away, Bill!

Did you know that there is all sorts of nefarious symbolism embedded in the Obama campaign flag? We didn’t, but we’re not surprised our new Guru of the Rapture has found the truth of it.  Did you also know that two over three is the symbol of Satan?  Did you know that stripes in general are symbolic of the “homosexual movement”?  That the O is the eye of God? Again, O Co Prophet of the End of Times, take us to the Promised Land (kindly note turkeys in the background):