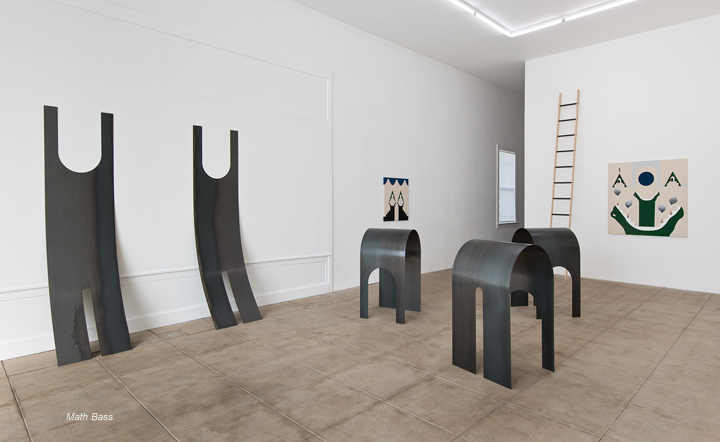 It’s so nice to be back in La-La-Land, to bask and see my face glow from the sunny rays Angelinos love to hate and Europeans hate to love. Being cheerless here is a crime.

There is a buzz going on in L.A., and it’s not coming from the massive electrical lines that grid the hills to the valleys, or found amongst the flashing lights of a red-carpet calamity. It’s happening in the young and vibrant art scene. Perhaps I am biased — I’m seeing many of my peers come into their own, flourishing into a thought-provoking conceptuality that juggles humor with irony. This is what I love; it’s unique to the creative expression of these bright groves.

The receptionist at my local yoga hub responds to my praises of L.A. light, “Well I think it’s about to get gloomy…” I chuckle and say, “Honey, you don’t know the meaning of ‘gloomy’. You have never had the shocking experience when you wake up one morning, after months of gray, and realize how  demoralized you are simply by the effects of bad weather, nothing more.”

How boring is it to talk about the weather. You both live here; no point cheering on the cheerleaders.

Back to the buzz about art. The excitement in the air is palpable. People are going the distance creatively and socially, meaning people are going out, and you know how hard that is in this languid pleasure dome. I don’t recall it being so happening.

Last week I went to a show at the Underground Museum, run by painter Noah Davis. It’s a few blocks down from my studio in the ghetto of mid-city. A total scene, encounters from all my walks of life. The usual art kids mixed with the fashion crowd, there were the drug addicts who never go out, the musician friends I hadn’t seen since my time as a singer a decade ago, and a gang of skaters, an eye-candy frosting. (So I have a fetish for skater dudes. Blame me not.)

François Ghebaly opened a new space in the obscure and forgotten graveyard of downtown’s industrial age. His roster highlights that juggling of conceptualization with humor I mentioned; for instance; there was a fenced-in piece consisting of a robotic arm, usually used for baseball swing practice, throwing stones at a brick wall, a wink to the biblical “He who is without sin among you, let him first cast a stone at her.” Though, I have to say, my emotional favorite was a Cocky Rooster sculpture dressed and ready for Saturday Night Fever. Don’t ask me why but that static life-size figure looked like he was asking me for a dance — I said “Yes!” As I waited for the music to come on, a bloodshot-eyed artist came up to me and started praising Rick Owen’s steppers fashion performance. Wow. I love it when worlds collide. I have to admit I was momentarily shocked yet reminded, damn, but The Family has come a long way. I wanted to call Rick and say, “Dude, you’ve reached pop culture status. How does that make the ‘priest of cultish fashion’ feel?”

On the other side of town, at Overduin & Co. in Hollywood, Math Pearl Bass exhibits a mischievous combination of crocodile’s jaw and matchstick-flame paintings next to hand-made ladders reminiscent of the game chutes and ladders, an ancient Indian game about the journey of life fraught by virtues and vices and the vagaries of fate. In the center of the gallery, a group of metal sheets cut into overalls shapes playfully contort into backbends.

Bringing me once again back to India and Hinduism, life is just a game in which you are simply playing a role. Don’t get too serious about the drama. Yes, this is entirely my own conjuncture, I took a copy of the artist statement home, but sorry to say I didn’t actually read it, though I initially had every good intention to do so. This is the beauty and potential downfall, sometimes exhausting struggle, of expression through fine art: “What does it mean?”

No need for pamphlets, no need for someone else’s insight. I can feel my meanings.

Further down the street, Regen Projects at the corner of Highland and Santa Monica presents Elliott Hundley, who seems to be breaking the patterns of his language into new beautiful forms of self-assertion.

I recall the first time I saw Hundley’s work. I was with The Hun, at Art Basel, maybe seven years ago. After a quick hello and kisses to Shaun, the prepossessing power-house that is Regen Projects, we turned around and saw Hundley’s work for the first time. Our voices crashed like two trucks on a freeway with echoes of “Ah” and “Wow.” He was still a kid making mythology-infused, 3-D collages pin set in foam board. Most likely this spoke to us both because mom and I are assemblers by nature; we have an innate knack of bringing the right elements together to complete our vision. And we love to tell fairytales. A few moments later, The Hun purchased one of his collage pieces. It was dominated with red. She hung it next to the professionally equipped kitchen, where I use to make treats for the awesome backstage crew of our fashion shows. Needless to say, Rick wasn’t enthusiastic about the Hun bringing the particular spectrum of the color palette into the stark, muted lair of his dominion on the Place du Palais Bourbon. I was happily surprised and challenged to receive a midnight email requesting a mural for their living room, “Oh, and by the way, make it a reinterpretation of Guernica.” (Thanks, Step-Dad: it’s only The Master’s masterpiece.) This had to be done in total secrecy while they were away on holiday. I will never forget The Hun’s face when she saw me splattered in paint, brush against the wall, thinking her daughter had totally lost the plot, then looking over and seeing Rick’s Cheshire Cat smile and realizing this was a beautifully organized revenge. “See,” he said. “I got your ‘egg’ to make us art.” In fact, the only thing that really surprises me is that it is still covering the walls to this day and has even been seen on the pages of the Wall Street Journal and many other publications; its vengeful presence has claimed its space.

I’m not a blinded fan of Hundley’s, no feverous art girl fainting at the sight of the Beatles, but I have to admit his new direction speaks to me: the collages have become introverted. Abstract paintings surround carved foam that is gracefully covered by colorful pin-set embroidery. Is he moving into a deeper space that was previously hidden behind the Styrofoam? I am honestly ready to consider the gesture in that way.

L.A. has given birth to a new talent, Julie Moon, with whose sister, Swan Moon, I graduated from Calarts. Julie was a graphic designer major and still works in that discipline today, making jazz and art-show posters. This girl has brought her own sense of collage to another level. Julie presented an exhibition of her ‘graphic designers’ collage club at Human Resources LA, another local artist-run non-profit space.

Beyond expectation, Julie artfully shines amongst them all. A lot of this is due to the process of fabricating her own paper that she cuts and rips away, creating her own subtlety of movement and color, that goes beyond merely finding magazine images to play with, making her iterations all the more sincere, true artifacts of representation. After seconds of being in the space, I was draw to her Woman Bathing. Two breaths later I snapped out my checkbook and purchased my second work of art. It is critical to be on both sides of the game, to be both art maker and art collector. Onto Mike Kelly’s retrospective at the Moca Geffen, a must-see for anyone calling herself an artist in the making. He is the father of all directions of expression; in other words, he’s the founder of today’s artists’ ability of freedom in declaration, in a post-post-modern art world, where a need to freely move from one medium to the next determines an artist’s capacity to uncover her soul while retaining a sense of integrity and visionary message. Or was he simply a reflection of the 60’s artists introductory, when insights were too high on LSD to make sense of a supernal image? Again, I feel my own meanings.

While pondering this question, I stumble upon a phenomenal painter-driven show at The Box on Traction Avenue, a gallery directed by Paul McCarthy’s daughter. McCarthy is today’s golden idol for L.A.’s underground performance art, inspiring quasi-tikes like me, who have actually made it beyond skid row. The extraordinary talent of Juanita McNeely and others strike me with flowing colorful depictions of a hidden inner life that removes our notion of Francis Bacon to other level.

Yet again the personal story drives me: The Box is in the same building where my parents ran their little fashion house, when Rick was just a young punk kid demonstrating his manifest talents as The Hun’s pattern maker.

Here, I can’t help but recall, surrounded by the stunning gestures of oily and acrylic paint. Not so long ago I was just a kid in a field of fabrics creating my own stories and projecting images against these walls.

I am home. The bright rays, the soothing art.