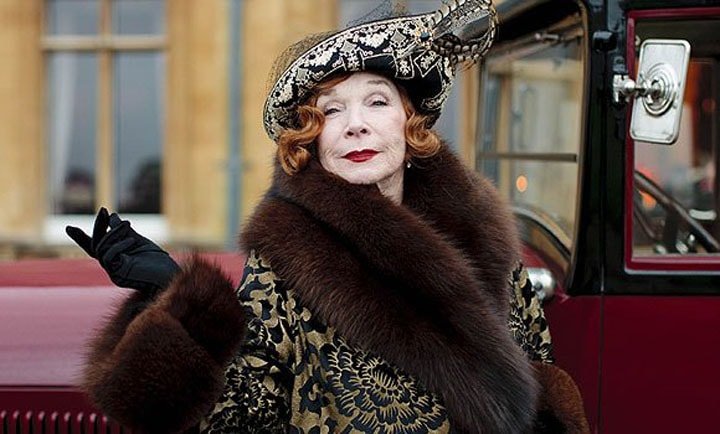 Much as we love Elizabeth McGovern and have always been puzzled as to why her career in Hollywood stagnated to the point she had to move to England—which is akin to heading up the 101 freeway  in reverse, northbound rather than south, as one should—like everyone else we know that Downton Abbey is really Maggie Smith‘s show.  She is even threatening not to come back next season, which might just be the sort of haggling maneuver worthy of her character, Violet.  Or she might be sick of being strapped into a corset and gowns made out of heavy drapery material.

According to journalists in London who were given a glimpse of the next season in late July, it is actually Shirley MacLaine who steals the season, so Dame Maggie’s departure could also be a fit of old diva pique.  (We doubt it—that just sounded nice and dramatic, very Insider Gossip from the Set.)

Here’s what they’re saying on News.com.au in prose we would be ashamed to write ourselves (this is so you appreciate just how precious this site is to you):

DAME Maggie Smith provides the kindling but it is American film icon Dame Shirley MacLaine who lights the bonfire under her vanities in season three of Downton Abbey.

In an exclusive preview of the new season to journalists in London this week, the anticipated on-screen showdown delivered not only delicious claws-out fireworks, but an unexpected and intelligent challenge of long held beliefs between the two.

Smith as the Dowager Countess, Violet, preempts the arrival of MacLaine’s character Martha Levinson (the mother of The Countess of Grantham, Cora, played by Elizabeth McGovern) with the line: “When I’m with her, I’m reminded of the virtues of the English.”

“But isn’t she American?” asks Matthew.

And here’s the new trailer they finally put up yesterday on YouTube.  All the money’s GONE!  Oh, no!  (But we knew that was going to happen already. We were just faking shock and surprise.)