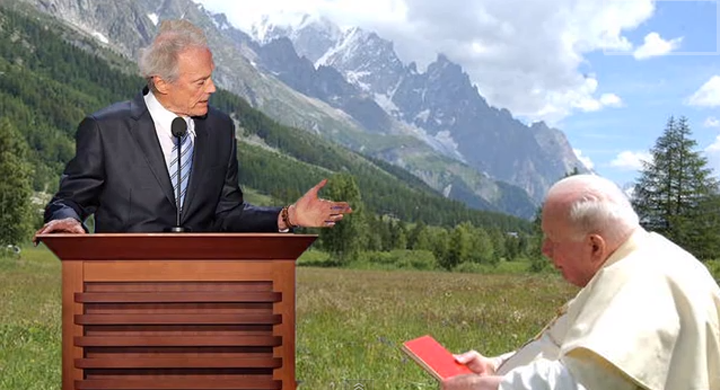 There was a time when Clint was a role model—he’s had spectacular late-life career with solid, watchable movies—but all of that ended last night when he talked to a nondescript piece of furniture and set off a furor of contempt and derision across all media, both traditional and “new.”

Never ones to miss details, we’d like to point out that properly speaking Eastwood was talking to a bar stool, not just a chair.  We’re still trying to find the make so that you too can have hallucinatory talks, or go over your “sides” for tomorrow’s audition with it if you’re an actor.  In the meantime, here’s what an Eastwood Stickley Chair looks like: The internet is the new wild west, and the first to draw wins the day, so we’d like to commend song-slinger Jonathan Mann for penning the first of what is likely to be hundreds of folksy Clint Eastwood Talking to a Chair songs.  We will try to keep this post updated as more amusing trinkets teeter in, but then again we might not because we’re already sort of saturated and bored with this, not to mention saddened at the fall of yet another hero.

Vice has posted a semi-funny interview with a bunch of chairs.  The group of directors chairs is the funniest, but not as insider as we would have made it, of course (click on image for link): And don’t forget his awful rendition of “I Talk to the Trees” from Paint Your Wagon:

What the fuck?  It turns out the RNC did clear Eastwood’s speech, but hadn’t vetted it, which sounds like typical political double speak to us.  While we consult lexicons and thesauri for the difference between clear and vet—we suppose the former means to approve and the other means to edit—you can read the full New York Times article HERE.

Believe it or not, this whole talking-to-the-chair thing has become difficult for some outlets to mine for comedy. We like The Daily Beast, but like all Tina Brown enterprises it’s too self-important and too coolest kids in school to be truly funny. To wit, this rather lame vid they slapped up there before everyone took off for the weekend, which had lots of potential, but, like Romney, didn’t deliver:

It was, of course, Jon Stewart who delivered something approximating a level of parody we would expect from this.  Or maybe the whole shtick was in itself such outrageous self-parody that it couldn’t be made funnier by anyone.  We’re going to jump the pond later this weekend to see if the Brits have come up with something better.

Bill Maher seriously defends Eastwood, while we turn the transcript into poetry, which you can read HERE.