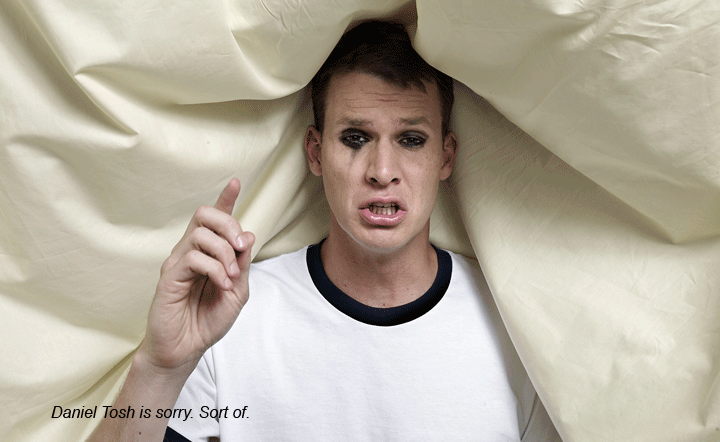 Warning: I’m about to be condescending to the simple-minded. Unfortunately, they do not read PFC, so please forward this article if you know any of them.

I’ve tried to settle controversies “once and for all” in the past, but until we hit 300 million clicks per day here, I’m going to keep falling short of enlightening everyone. Well, let’s say 220 million clicks per day. All those horrid old people out there refuse to budge an inch no matter how much wisdom I share, and they probably don’t know what the internets are anyway.

So, to all under-sixty-five North Americans who can read and have access to a computer (with apologies to those of you who can’t and don’t… you know who you are, because this looks like gibberish and you can’t see it anyway): The Daniel Tosh Rape-Joke Scandal is not a free-speech issue, for fuck’s sake. Tosh steps in it.

I’m sure you’ve heard by now that comedian Daniel Tosh was forced to issue an insincere, half-assed apology this week after telling a female heckler that it would be funny if she were gang raped. Between his initial comment and subsequent backpedal, the internet exploded with a fireworks display of condemnation… and corresponding support for the lad.

While all this was happening, New Jersey Devils forward Cam Janssen ignited his own, lesser scandal during an internet-radio interview with the St. Louis-based Thom and Jeff Show by claiming he would go out of his way to “hurt” an opponent for being gay. In fairness to Janssen, he was being egged on by the hosts to give increasingly outlandish answers to their questions, and, as a marginal player who rarely gets sees game action, he was probably jazzed that someone wanted to interview him. Still, has this guy been punched in the head a few too many times? Did he forget that his contract includes a personal-conduct clause?

In all the froth that has been churned up by these incidents, the phrase “freedom of speech” emerged quite a few times. As in, “what happened to the freedom of speech?” Followed by accusations of Nazism and fascism (or, in the case of the tea-party types, socialism, since that’s the only polysyllabic word they know).

Those with a rudimentary-or-better grasp of civics are invited to skip to the next paragraph. But if your hero is Sarah Palin or you regularly leave comments after Yahoo! articles using non-words like “libtard” and “Obummer,” please read carefully: The “Right to Free Speech” means you can make public comments without fear of being jailed by a king, an emperor, a dictator, Mother Teresa, a secret police agency, or some other representative of a totalitarian governing body. No one is telling Daniel Tosh he will be arrested or stoned to death for making rape jokes. He can make all the rape jokes he wants. It’s just that we can criticize him for doing so. That’s the mind-blowing part: We are also exercising freedom of speech. Either Janssen can never keep his mouth shut, or he’s trying to catch a saucer pass with his teeth.

The only crime committed by Tosh is lameness. Few comedians attain the level of public awareness shared by their entertainment counterparts who act in movies or perform hit songs, so one as relatively well known as Daniel Tosh should be able to think of something a hell of a lot funnier than gang rape. My stage experience is restricted to drumming, and even I know that much about comedy. Yeah, yeah, comedy is about taking risks and shocking people. It’s also about being funny.

But then, it is beyond my scope of understanding why people think radio shows like Thom and Jeff are funny. Two guys yammering about ‘bangin’ fat chicks’ and ‘beatin’ up homos’ is not what I consider the pinnacle of humor, but I don’t use words like ‘libtard,’ so I doubt I’m the target audience. My advice to Cam Janssen – who is likely to be fined or suspended by the NHL for his comments – is to sit quietly in the press box, collect your six-figure salary, and, since you like to see people get hurt, pray that the second-worst guy on your team breaks an ankle. That way, you might actually get into a couple of games.

If a Tosh-related issue truly needs to be addressed, it’s the absurdly overdue legalization of marijuana, not some flailing attempt to silence an asshole in the audience at a comedy show. I’m talking about the late reggae legend Peter Tosh, who advised the world to “Legalize it” in 1976.

Come on, President Obama. Do it. Don’t make this libtard think you’re a bummer.  Better yet, listen to the original Tosh: