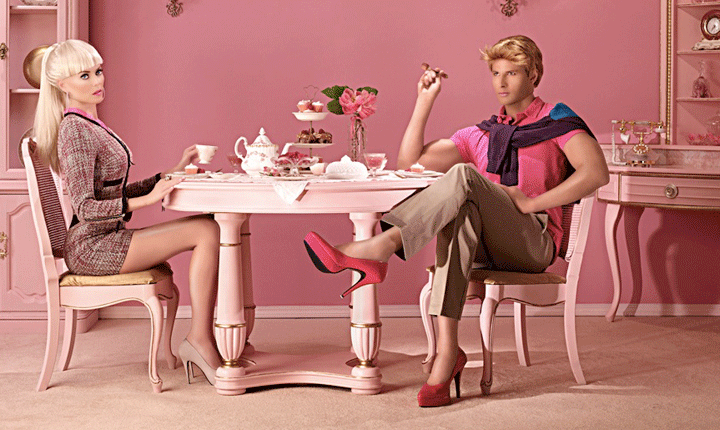 Being the responsible, thorough investigative journalists we are—not to mention objective and unopinionated—we are pretty sure we’ve discovered why Anderson Cooper decided to come out this summer: Canadian artist Dina Goldstein‘s exposé of the truth behind Barbie and Ken‘s relationship.

Goldstein’s photographic series about Barbie and Ken, somewhat under-imaginatively entitled “In The Dollhouse,” was released early this summer.  A month or so later, Coop came out.  Having always identified with Ken, he felt he could live the masquerade no longer.  Or that’s our version of it, anyway.  Further evidence: a month or so after that, his putative fiancé, Ben Maisani, was caught by papps snogging a man who was anything but Anderson and far too swarthy to be a Ken doll, as is Ben, but we’re getting the thread totally tangled here and making no sense. G.I. Joes? Ben Maisani making out with a non-blond. Might not even be a Vanderbilt.

Presumably to avoid a lawsuit from Mattel, or perhaps as an homage to the penchant couples have for engraved initials, Goldstein changed the names of the couple to just B & K.  She says this about her series:.

B is a super doll, the most successful doll in the world. Her partner K is grappling with his sexuality and finds himself in a loveless marriage. He struggles with his position in the household and faces his lack of authenticity.

Never a company to be out-gayed, Mattel released their own Barbie in Homolandia, but let’s take a peek at Goldstein’s series first. (More after the jump.)

Mattel’s response to Goldstein (or so we believe) was to commission a “Drag Queen Barbie” from New York design duo (and Tuttle favorite) The Blonds, who are known for their hyper-glittery, diamanté “couture,” a wishful American euphemism for the sort of gaudy, camp costume you can only realistically wear in demi-monde New York or onstage in Vegas.  The doll is based on Phillipe Blond, the trannie of the creative team (see slideshow), and is said to be Barbie, but we all know it’s really Ken after extensive hormone treatments, chin-reduction surgery and implants.

The doll will be available online exclusively for only $125 starting in December. (Thanks to our friends at Peccadillo Pictures in London for this tip.)