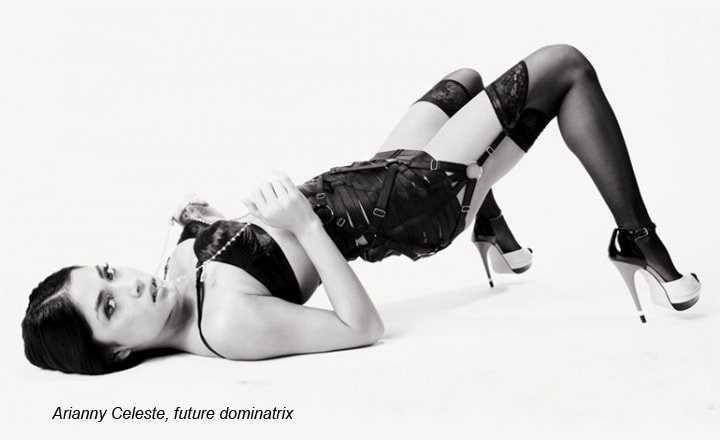 A big PFC thank you to the hardworking law-enforcement officers of Clark County, Nevada for arresting UFC octagon girl Arianny Celeste on domestic battery charges this weekend. If not for that event, what the hell would we have for a lead image? Tommy Lee Jones cashing another paycheck?

The arrest might be a good career move for Ms. Celeste if Internet-user comments can be viewed as a legitimate tool for market research. It seems that millions of men out there are eager to pay top dollar for a savage beating at the hands of the former Playboy model. Ah, America, land of conservative values and Puritanism.

The aforementioned Puritans are at it again, by the way. This time it’s up in Maine, home of LL Bean and Somes Sound, the east coast’s only fjard (recently demoted from a fjord on account of it not looking anything like the ones in Norway, according to Wikipedia). On Father’s Day, a conglomeration of churches throughout the state will be asking parishioners for donations to help fight gay marriage. Funds raised will be given to a political action committee known as Protect Marriage Maine, whose goal is obvious.

Note: I think their goal should be to come up with a less awkward name, but I write and edit for a living and I support marriage equality. We probably care about different things.

I’ve never heard a rational, legally sound, or constitutionally viable explanation for why churches don’t have to pay taxes the way that private homeowners, businesses, and other institutions do. People always bitch about supporting welfare recipients with their hard-earned dollars, so why are they are ok with all those pointy, white buildings hogging up valuable real estate without contributing to state revenue?

Nevertheless, I accept that churches will continue to get a free ride and that many small congregations would be out a place of worship if the same tax laws applied to their churches as to their homes. In other words, help keep blue-haired old ladies in church and away from forming street gangs! Lord knows the midnight basketball isn’t helping.

The face of a lazy welfare recipient.

Once a church starts spending money to influence policy, though, I say hit them at 35% of revenue raised. In fact, when a preacher starts talking politics from the altar, everything in that Sunday’s collection plate should be taxed similarly. My suggestion is made not to hurt churches financially but to keep them out of public policy (Vote for me in November and I’ll make it happen. I’ll also legalize pot and prostitution. Yeah, I thought you’d like that).

The bigger curiosity is why they don’t act like real Christians and give this money to the poor or donate it to cancer research? A popular question Christ’s followers like to ask (and to put on bumper stickers) is probably the best one they’ve ever come up with: What would Jesus do?

Jesus was the one who treated the prostitute with dignity when no one else would. He was the one who spoke out against greed and selfishness and wealth hoarding. If only he’d had a guitar, he could have headlined the Circus Maximus in Rome instead of getting crucified (although the pagans may have held protests). So why didn’t his father tell him about the big “Caesar’s Birthday” guitar sale at Musician’s Friend?

Because The Lord works in mysterious ways. Which, for the record, is the dumbest answer Christians ever came up with.

Since Arianny Celeste is going to kick our asses if we choose someone else as This Week’s Brunette, here she is again: