How Hollywood Trolled Itself with “Borat” 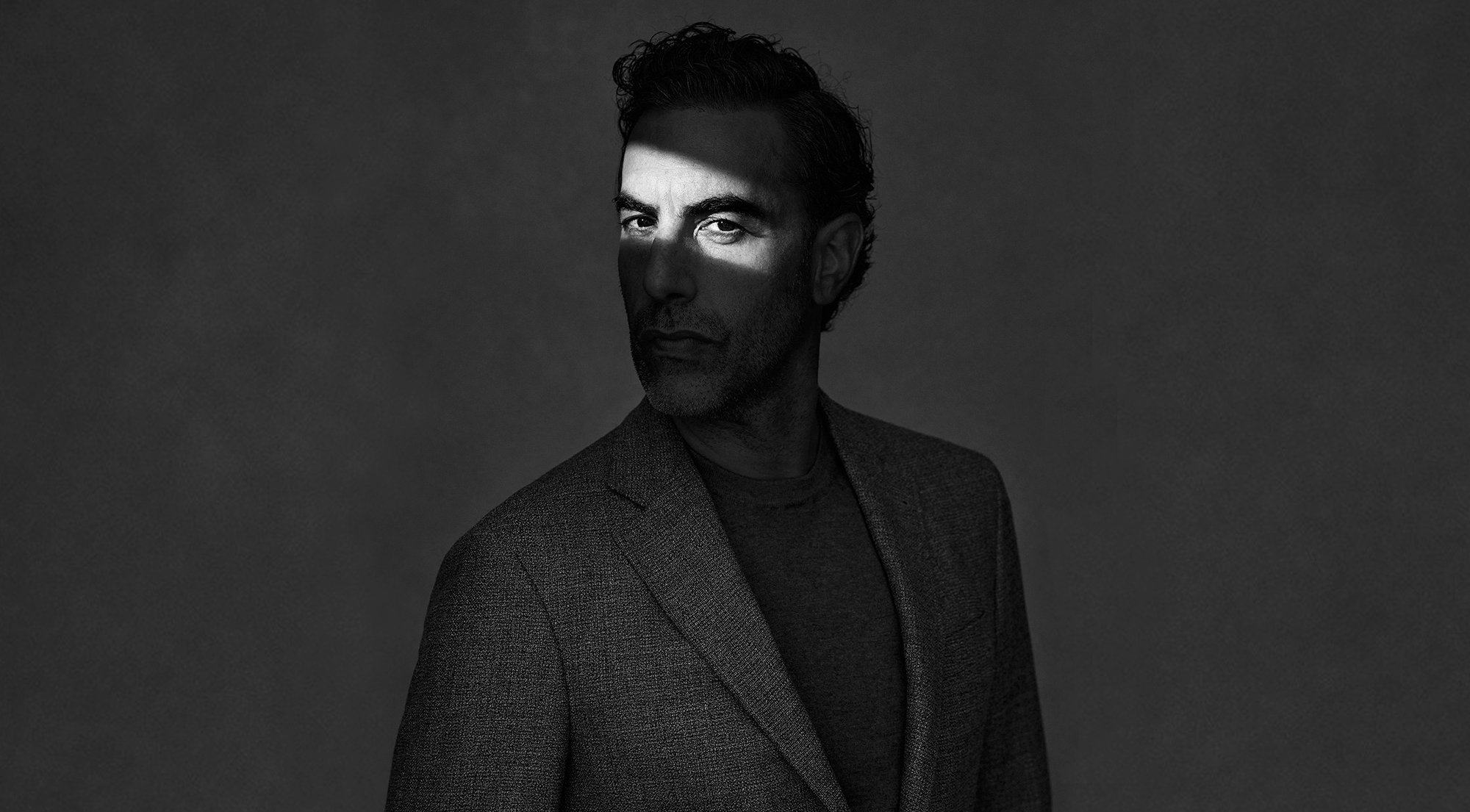 I was thinking about Kashmiris this morning, and the legend that they are the descendants of the Lost Tribe of Israel, the great pride they take in that claim, how insistent they are of its truth. They also claim that Jesus survived crucifixion, and came to the Valley to live among the chosen of the Chosen Ones in “paradise on Earth.” There is a rock with indentations they believe are the footprints Christ made as he ascended to heaven. It’s something of a Kashmiri Kaaba.

Maybe the legend was made up to tickle the religiosity of the young Israelis who are way overrepresented in the tourist population — thousands swoop into the Valley every season after completing military service. A Haaretz headline from a few years back: “Oy Vey Kashmir – Israelis Top the List of Foreign Tourists to War-torn Paradise Lost.” I doubt it’s a tourism lure: It’s actually an example of ‘Kashmiriyat‘, their spirit of tolerance and acceptance.

It didn’t dawn on me until a few minutes ago to make the connection that Kashmir’s population is 98% Muslim. Still, they’re proud they might be descended from Jews. That reminded me of another Muslim-majority Central Asian country, Kazakhstan, and the slander and damage Sacha Baron Cohen inflicted on a people as proud of their country and culture as any other.

I was so appalled watching the ‘Borat’ sequel that I felt nauseous and switched it off two-thirds of the way through. I then detailed the reasons for my disgust on October 24, 2020 in one of my rambling Facebook posts, a good five months before the Hollywood Foreign Press Association (HFPA) sanctified Cohen’s act of cultural genocide with a Golden Globe:

“I can’t move past how sorry I feel for Kazakhstan, now that ‘Borat’ has doubled down on that country’s putative awfulness and backwardness by adding a senselessly bizarre representation of its treatment of women. I don’t mind how equally ghastly, ignorant and religious he makes Americans out to be; nobody should shed a tear for us, much less for Texans. While some of his provocations in the American scenes are vulgar and cancel-culture, hate-laugher offensive to those he inflicts them on, they are by and large based on fact; Cohen features real Americans doing and saying these things, and many of them are inexcusable.

“Like many Liberal entertainers over the past 12 years, particularly over the Trump portion, Cohen has taken an excessively radical, hysterical stance toward geopolitics, which does nothing constructive other than further polarize traumatized nations. I’ve seen the viral video of him in a black suit at a lectern making hyperbolic, nearly irrational statements about the state of Western liberal democracy, with all the usual dissonant alarm bells this new religion rings without stop. The darkness and pessimism that is clouding his thinking has also affected his comedy, in my view.”

However, it turns out I was sloppy, lazy in my Googling. I wrongly assumed that a member of another persecuted minority was making justified accusations of anti-Semitism:

“I don’t doubt that Kazakh culture, mostly Islamic, is indeed grossly anti-Semitic, as I believe all former Soviet states are. As a Jew, Cohen is right to skewer them for that, but beating the comedy out of that trope with relentless repetition isn’t my idea of fresh writing for a sequel to a 14-year-old hit. Poor rural Kazakh villages do indeed look like how they’re shown in the film, but the new capital, Nur-Sultan, and other cities couldn’t be further from the way they’re shown.

“What is outrageous from a feminist perspective is the way Kazakh women are supposedly treated. According to ‘Borat’, they aren’t even allowed to drive, which is the least of the grotesque distortions about Kazakh women the film puts forward as being as real as its statements about American society. 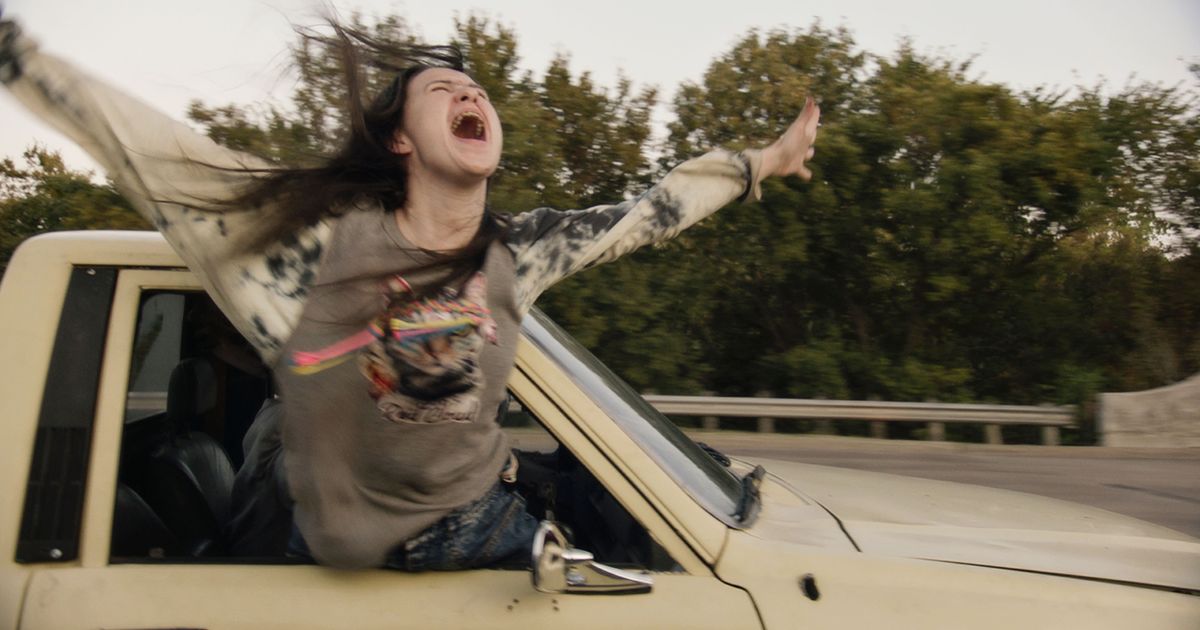 Borat’s daughter, a Kazakh girl oppressed by Islam, raised in a pigsty, liberated by America. But is she?

“The truth is that not only can women drive, over 25% of Kazakh MPs are women. Kazakhstan ranks 30th out of 144 nations for gender equality, ahead of the United States. International Women’s Day is a state holiday; it isn’t in the States or the UK. Yes, there is a problem with sex trafficking, again a challenge for most former Soviet states, and there are bride kidnappings in the rural areas, many of which are consensual to avoid paying dowry.

“If you have ever lived in a country that still has a dowry system — I still have deep roots via my family in another developing Islamic Central Asian state, Kashmir — then you know it’s an integral part of community economies. Wrong, yes, but much less so than fossil fuels, which we also can’t eradicate because of the damage it would do to the global economy.”

Then, the obvious question that nobody had asked at that point: “If Cohen invented a fake country for ‘The Dictator’, Wadiya, why not make up a country of origin for ‘Borat’?” Probably because a Jew making fun of a real Arab leader is too dangerous, the situation in the Middle East too serious to mock. That only makes his bullying of Kazakhstan even worse.

I’m ashamed that I took Cohen’s accusations that Kazakhs really are horrendously anti-Semitic at face value. But why would they be, I realized in the shower this morning, if they’ve had little to no contact with Jews over the millennia, like Kashmir? A bit of Googling reveals the opposite to be true, of course: “Anti-Semitism is not prevalent in Kazakhstan and rare incidents are reported in the press.”

That makes both blockbuster Borat movies possibly the most outlandish, heartless incidents of Islamophobia that we’ve witnessed since the Twin Towers came down.

It’s not just how hypocritical this new cherry-picking moralism is — Armie Hammer, Pepé Le Pew, Dr. Seuss; “diversity” casting ‘Superman’, ‘The Little Mermaid’, and on and on — ‘Borat’ ended up celebrated and honored with the second-most-prestigious award the film & TV industry bestows, a Golden Globe. [UPDATE: As of March 15, 2021, ‘Borat’ was nominated for two Academy Awards, Sacha Baron Cohen an additional one for another film.]

And what about all of those woke media bites strutting the red carpet, shaming the Hollywood Foreign Press Association for its lack of diversity? “Expand the tent!” Hanoi Janes cries. How does the HFPA even respond to that? Fire their White correspondents, and somehow find qualified, fully bilingual Black entertainment journalists in their respective countries willing to leave home and family for years and relocate to LA, to scrape by banging out banal copy on deadline for shit pay? A few of those countries probably have a negligible Black population from which to find qualified journalists to replace Whites with in the first place. “Who cares? Get it done, now!” scream Their Holinesses from their star trailers, while shielding their eyes from the hairspray. 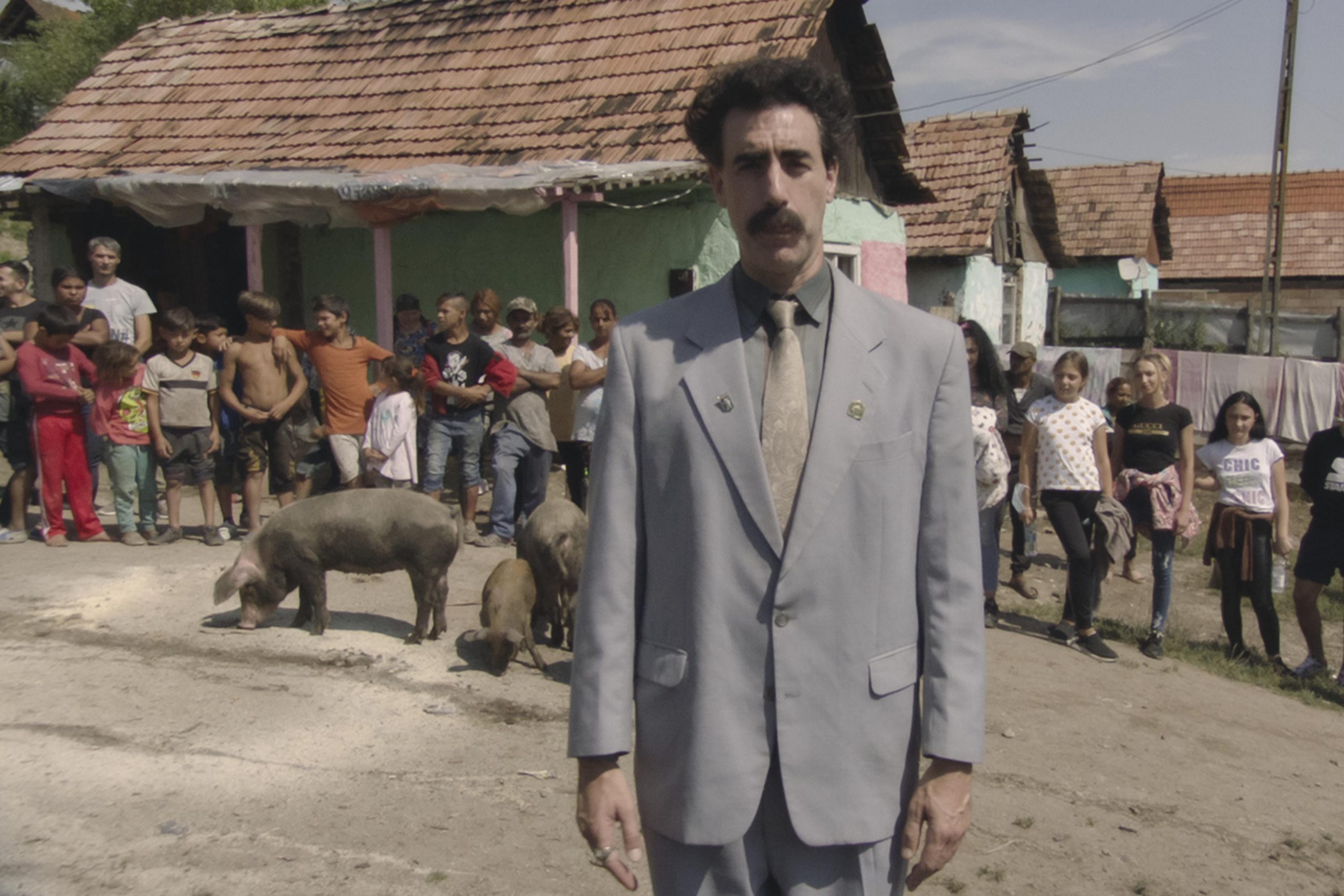 ‘Borat’ is real supremacy: The abuse of a far weaker nation by just about everyone in the all-powerful Anglosphere, regardless of race. They stood by, said nothing, shrugged their shoulders, applauded the abuser, but still took Armie Hammer out and beat his career to death for being too kinky with his sexting. Then they shot Pepé Le Pew for teaching children to be rapists, and Dr. Seuss for being a racist, all based on the opinion of one powerful, bitter racist’s interpretation of nonexistent symbolism, a verdict based on zero data from no studies conducted about the putative negative effect those beloved cultural icons have on children. Pure malice is all it is, and the desperate need to justify yourself, to keep the heat on your self-sanctified mission, no matter who’s thrown on the pyre of “social justice.”

Tarring and feathering Kazakhstan for generations to come is justified, you see, acceptable collateral damage crushed under the jackboots of woke self-righteousness in service of their divine mission: To vindicate social injustice by mocking Republicans and undereducated Southern White religious dodos, the softest targets in the world. It cannot be done enough. The choir must be preached to with the same pyrrhic double standards day and night, until there is nothing left to burn.

God bless America, Britain, the HFPA and everyone else who aided, abetted and rewarded that sanctimonious, unfunny, bigoted self-styled liberal hero. I remember that viral video of him at the lectern in front of, irony of ironies, the Anti-Defamation League, when he was accepting their International Leadership Award, lecturing the world about his disingenuous concerns for autocracy subverting democracy. His words are even more galling now that I finally looked up the truth about anti-Semitism in Kazakhstan:

Democracy, which depends on shared shared truths, is in retreat.

Even if I did tear Borat 2 apart after immediately after it was released, I’m still mortified it was ever filmed at all. I can hear people dismiss my misgivings with using that trite sentiment, “Nobody takes the Golden Globes seriously. Who cares if Cohen’s silly movie won?” Television cares, social media cares, the press cares.

The sheer scale of liberal social injustice is staggering when I think about it. I imagine this is how the illusion woven by McCarthy’s anti-communist roundup must have seemed to frightened, uncritical, bomb-sheltered minds at the time: As a justified crusade that, because of its mask of divine righteousness, was even more evil than what it sought to root out.

Images of Nur Sultan, the capital of Kazakhstan, that Sacha Baron Cohen makes look like a shithole. 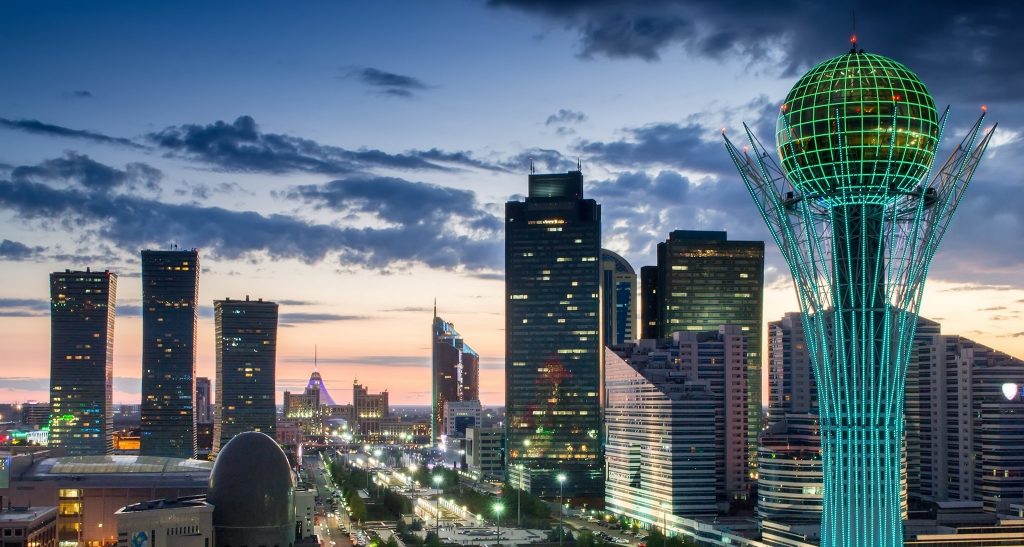 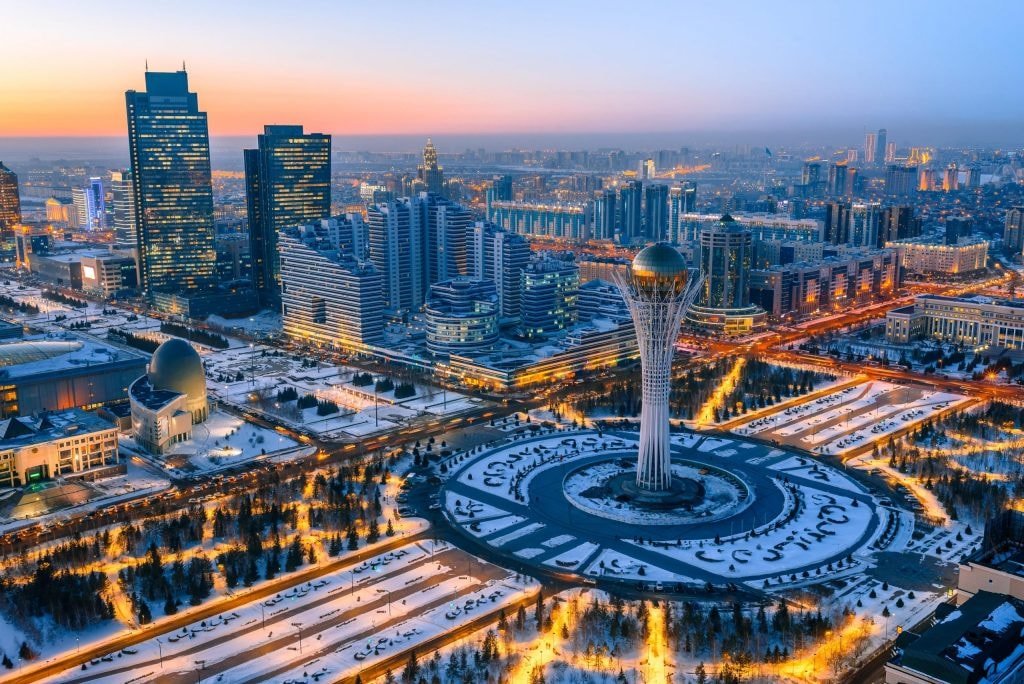 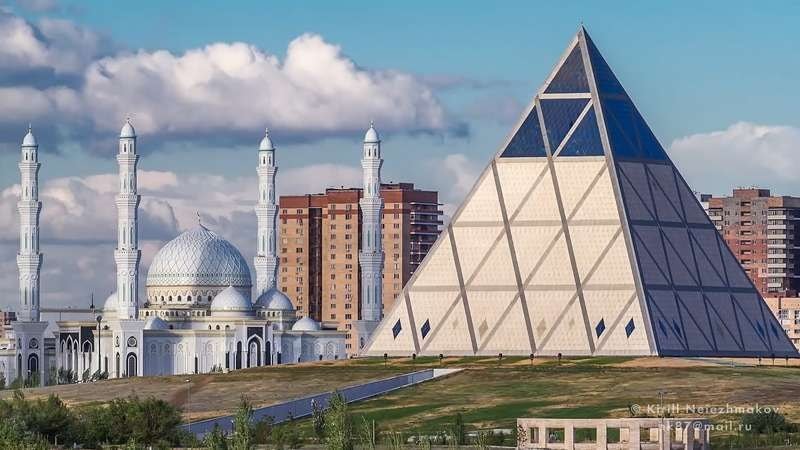 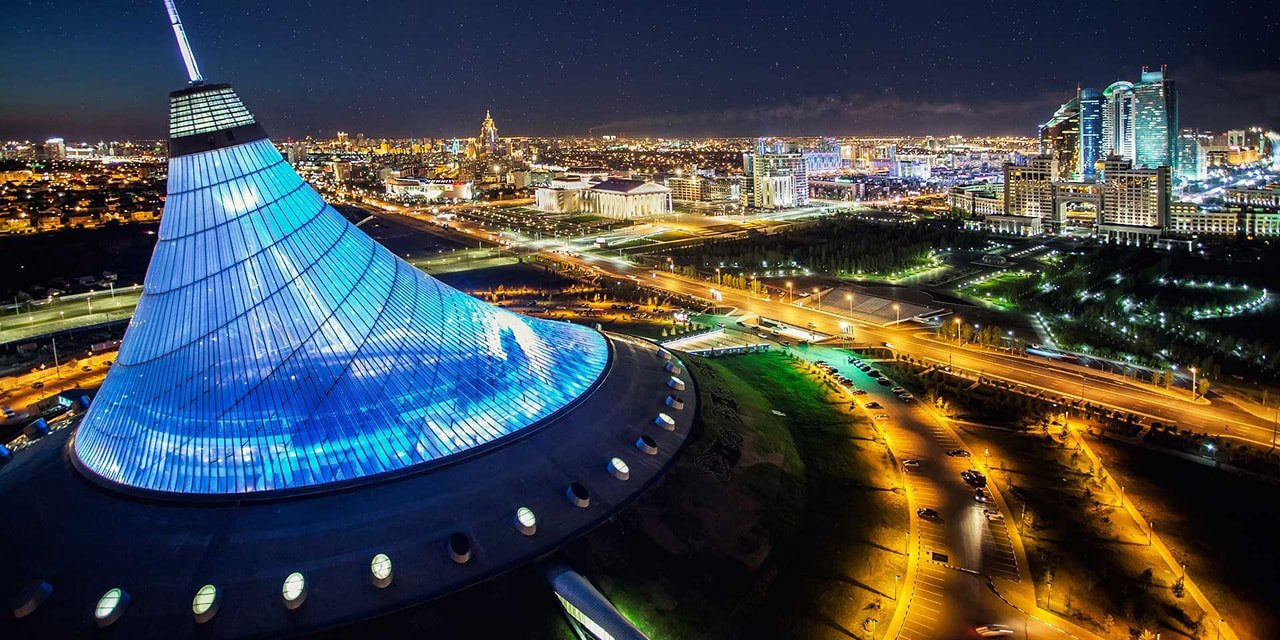 Sacha Baron Cohen receiving the International Leadership Award by the Anti-Defamation League, obviously not for being the worst defamer of our time.