At the risk of seeming microaggressive and patriarchal, if you haven’t seen Ridley Scott’s ‘Raised by Wolves’ on HBO, you should. It’s far from the usual, lazy ‘Star Wars/Trek’ derivative. From the perspective of someone raised in Rome by parents who more often than not were lupine, it’s a treasure chest of easter eggs.

Scott references his own gorgeous, Crusades-based misfire ‘Kingdom of Heaven’ often, right down to replicating shots, notably one of King Baldwin/the Captain being carried on a litter across barren terrain. But the most notable influencer is Norwegian ‘kitsch’ artist Odd Nerdrum, whom I’ve been a fan of since I started swiping his images for my own moodboards over twenty years ago. Aside from the costumes and the harsh, post-apocalyptic landscapes, it’s pretty clear where the Necromancer’s wicked killer scream comes from — see the feature image above, as well as Nerdrum’s Dawn, which Tarsem Singh also grafted onto a Fellini landscape for a fantasy sequence in ‘The Cell’, the only other movie I can think of that uses Nerdrum as inspiration. 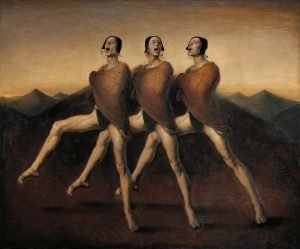 Rome is everywhere, from the title to glimpses of engravings on rocks: When the Mithraic clergy try to convert and baptize natural-born atheist and militant vegan Campion, his attention is distracted by a tombstone of one of his siblings, now the cornerstone of the first Mithraic church on Kepler22b. It’s engraved with SPIR. The acronym for Rome is S.P.Q.R. I need to go back and study the imagery painted on walls, but I’m sure nothing is accidental, just a doodle slapped together by the art department to get the shot ready.

In episode nine, we finally get a direct reference to the myth of Romulus and Remus, the founders of Rome. The lead character, Mother, is clearly the she-wolf Lupercal, who raised the Cain and Abel-like brothers. If you need further convincing, Mother has six teats — and you thought you’d see it all with androids in film. She also has her feral moments, to say the least. Until evidence points elsewhere in season two — it cannot come too soon — I take it that Campion and Paul are Romulus and Remus. It won’t end well between them, but true to the series it will be in an inventive ending.

Then we have the religion, Mithraism, a cult based on Zoroastrian dark-light dualism that was popular with Roman soldiers who served in the eastern provinces of the Empire, and brought it back to Rome. It emerged concurrently with Christianity, but was suppressed and wiped out by the Church, because that’s the good Christian thing to do; as a result, we don’t know much about it, but the symbols remain, refreshingly and unusually incorporated into Scott’s rich tapestry. Sol is the light aspect of the godhead, to whom Mithra sacrifices a bull in Mithraic iconography, a symbol that has been conspicuously missing from the series so far — the act of ‘tauroctony’ is central to Mithraism. But mentions of Sol are everywhere.

At the polygonal “temple” in the middle of nowhere, Marcus reveals the hole is a Mouth of Truth, an important artifact of Roman culture. As a kid in Rome, I was both terrified and dismissive of the Mouth of Truth, which severed the hands of liars. I knew my hand would surely be chopped off with all the lying I had to do to survive the wolves who raised me.

The crunchiest subtext is the filming location, South Africa, home to the Cradle of Humankind. We’ve seen the emerging Africa-as-Eden trope used before, notably in ‘Black Panther’, but by making it the new Rome, Scott declares it the origin of civilization as well — that Judeo-Christian-biased honor usually goes to the Middle East. The word ‘civilization’ is a sticking point for many Black activists as a result.

As a friend who used to be Scott’s former archivist noted, he’s thrown his life’s work in this series, everything that has ever fascinated him. ‘Raised by Wolves’ is his cabinet of curiosities, supported by strong, engaging characters and plot lines. After episode four, I became convinced that ‘Blade Runner’ was a test shoot for this. I want to live in this series, perils be damned. May Sol never allow it to be cancelled.