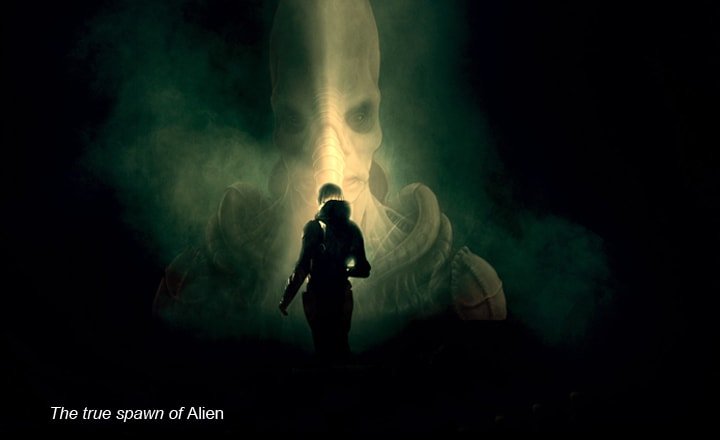 How it’s like Alien: Space travelers visit a horrible planet (probably the one they were talking about in the title) and one of them gives birth to a monster that begins to kill the crew one by one.

How it’s better than Alien: The female crewmember actually gives birth the old-fashioned way. Before you say, “But Baker, exploding chests are better,” I want you to think about a woman giving vaginal birth to a disgusting, drooling monster. It’s kinda gross.

How it’s worse than Alien: Good luck remembering what the hell happens after that. I don’t. How it’s a lot like Alien: A space crew piloting a corporate-owned ship sets down on Saturn’s moon Titan but is damaged. A creature virtually identical to the one in Alien gets on board and starts killing them one by one.

How it’s better than Alien: The monster’s victims come back to life as vampire/zombies, including a buck-naked one who is still pretty good looking, despite. Creature also features exploding heads (top that, Prometheus) and Klaus Kinski.

How it’s worse than Alien: Klaus Kinski is so fucking creepy that the poor alien is an afterthought. How it’s like Alien: A multistage life form escapes from a space lab on another planet (the landscape of which looks nothing like a desert in southern California) and attacks some guy’s face. Somewhere along the way it turns into an insect-like beast and starts killing the rest of the inhabitants.

How it’s worse than Alien: The cute, talking robot sidekick is hilariously out of place. Were they trying to woo the Buck Rogers crowd? Also, no Klaus Kinski. I guess that makes it worse than, Creature, not Alien, though. Honestly, I haven’t thought this whole “list” concept through. Sorry. How it’s like Alien: A spaceship lands on a dark, windy planet and discovers a weird, derelict object of biomechanical design. Inside, untold horrors await.

How it’s better than Alien: This movie has piles of aliens, including a giant slug that makes sweet, sweet love to a buxom blond astronaut. Co-starring Sid Haig of Black Mama, White Mama, Robert England of Freddy Krueger fame, and Erin Moran of Happy Days, that line-up beats anything Alien can boast. Oh yeah, Mr. Hand from Fast Times at Ridgemont High plays a Jedi master/Evil Emperor disguised as a cook, which is totally something Yoda would do.

How it’s worse than Alien: Actually, it’s better than Alien. Didn’t you read the previous paragraph?

Flip through the sideshow slideshow of freaks and creatures from the above films: