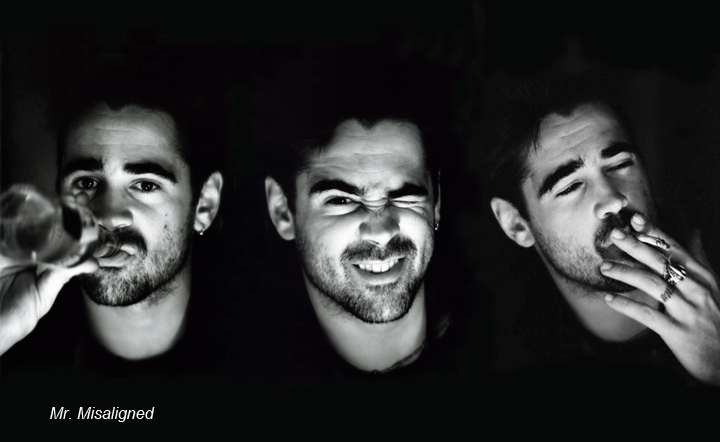 I misspoke.  In a piece earlier this summer about films I would be seeing based on their trailers, I said that I would be one of the first in line to see Total Recall.  I won’t be seeing it after all, unless there is nothing to watch on a non-stop Emirates flight from L.A. to Dubai at some point.  Truth be known, I wanted so hard to like what I was seeing in the trailer that I was psyching myself up for the film itself.  And this is entirely because there are few actors I wish well as much as I do Colin Farrell.

I don’t believe I’m alone.  Farrell is not only hot, he is also talented, hard working, and not a little fascinating as a person.  His is the best of the “leaked” celeb sex tapes; from what I’ve seen of it, he’s my kind of man: louche, unapologetic, hard partying, a filthy talker in bed.  Now it appears all of that has changed: the bad boy has given way to the responsible man, the coke-addled chronic masturbator and womanizer has wiped himself off and become a sober father of two.

It is hard for me to picture Farrell as the twelve-stepper type as portrayed in recent profiles because that isn’t my take on him, although I have never had the pleasure of getting to know him, as hard as I have tried to make that happen.  I am a little skeptical because he probably has to present that AA-disciple image publicly if he wants to reboot his chances at becoming an A-list star; however, he strikes me as too European to get involved with what is basically an American fundamentalist religious cult.  Quibble about it as much as you want, but surrendering yourself to a “higher power,” praying serenely at meetings, following the tenets of a founder named Bill, and many other hallmarks, qualify Alcoholics Anonymous as a cult.  That this cult has so permeated our society as to become institutionalized in our government—i.e., a court will likely order you to attend what are basically religious meetings if you are caught drinking and driving—shows how deeply entrenched it is in American culture and the film industry itself. All of this leads me to believe that Farrell is just playing along.  My guess is the upper-middle-class rich kid from Dublin has simply toned down the bad-boy act, dialed back the partying considerably because it gets boring after a while, but otherwise he’s having none of that American religious repentance bollocks.

After last weekend’s cataclysmic disaster at the box office with Total Recall, rebooting Farrell’s career is going to be harder than ever to accomplish.  At thirty-six, he is still being described on the IMDb, in his own bio, which he controls, as “a rising star.”  In his review of Total Recall, AO Scott referred to him as “would-be movie star.”  But the Most Powerful Woman in Hollywood, Nikke Finke, went one step further in her assessment of him while reporting on Sunday that Total Recall had made only twenty-six million at the box office against a production budget of one hundred and fifty million:

“I don’t know why Hollywood keeps thinking Colin Farrell can carry a movie.  He’s just not box office, and this pic proves that again.”

A film must make back three times its production budget to start making a profit, so this is basically Sony’s John Carter.  The director, Len Wiseman, will take a lot of the blame, as he should; according to the grumblings of my industry-wallahs on Facebook and elsewhere, he’s something of a hack.  I wouldn’t know, never heard of him before last weekend; I have tried to watch the Underworld series he created, but couldn’t get past more than a few minutes.  But who cares?  I’m not the target audience.

Farrell will shoulder the brunt of it, as will his agency, CAA.  The Total Recall debacle is the equivalent of aiming all of the nuclear bombs on Earth at the sun in the hopes of keeping it from dying, and having that not only not work, but now it is dying at a faster rate than before.

The problem with Farrell isn’t just that he’s a great actor, as performances like the one in the Golden Globe-winning In Bruges have shown, or that he’s so sexy, but that he’s so fucking famous.  In theory, he is a star.  But he’s also not because he can’t seem to carry a movie.  That’s a major dilemma.

In a way this article is the companion piece to my earlier one about Channing Tatum, an equally hard-working, hard-partying stud, who has somehow managed to make the crap in Hollywood work for him without letting it stick, and emerged this year as a bona fide star, no “would be” or “rising” before it.  Farrell, on the other hand, has done everything he can to make quality films alongside the crap, but somehow he’s become overwhelmed by the latter and is drowning in it.

Note that I haven’t said “has drowned in it” because it ain’t over yet.  The fat lady is far from even getting ready to sing—Farrell is still too good and too fucking famous. At issue here are a few factors.  Most prominent is the current state of Hollywood and theatrical filmed content worldwide: the crap is getting crappier, or it is more exclusively crap than it ever was, and there is less choice of major film roles that CAA will let you take and still make your annual quota.  The smaller films are barely paying enough to cover the nanny’s salary for a year (not that Farrell needs it, apparently, but rumors of his family’s wealth might be exaggerated), and the mid-sized ones that could have covered at least fifty percent of his purported two-million-dollar-per-film salary are almost non-existent these days.  Only a sales agent would know what Farrell’s attachment to a film might be worth in terms of selling that movie to worldwide territories, but my guess is it’s still pretty healthy.  Again, those mid-level films that would be partly financed through pre-sales are not closing because the markets are still so shitty, and the future of how filmed content is delivered is still so uncertain—DVDs, for instance, are as good as dead, and that greatly diminishes a film’s potential future earnings after it has left the theaters.

Another factor is choice. An actor should have control over his career and what he chooses to make, and I don’t doubt that Farrell has had considerable say in what he is offered, but I don’t think CAA is the right place for his unique brand of feral, lusty talent.  He’d be better at a smaller boutique-ish place like UTA, which handles the likes of Johnny Depp and Channing Tatum, and does it brilliantly.  CAA is too much of the cold, cynical American machine, which works for some: they turned Robert Downey Jr. around like nobody’s business, I mean, to the extent nobody remembers that Downey used to be a meth head who liked it up the ass from guys, a lot of guys.  (Am I supposed to put “allegedly liked it up the ass from guys” in here?  Okay, I’m putting in allegedly.  But it’s an allegedly with a lascivious, knowing smirk.)  But that CAA magic doesn’t work for Farrell, for some reason. Another factor is luck.  Personally, had I been Farrell, I would have taken one look at those Underworld movies and said, “No fucking way” to Total Recall.   But times are tough, pickings are slim, and they have been pretty desperate over at CAA to launch those nuclear warheads at Farrell’s dying star.  So he took a punt on it, hoped the reboot of a well-loved classic would work, but it failed miserably.  And everyone wanted it to work because nobody wants this particular sun to die just yet.

Total Recall will probably do better overseas where they have a greater appetite for mindless, badly scripted American dreck than we do, for the time being.  As long as it’s reasonably well made, they feel they’ve had a bang for their ruble or yuan.  And the average cinema-goer anywhere isn’t going to give a tinker’s damn what Nikki Finke thinks—Farrell will still be a recognizable face and have some appeal.

Rather than dwell on past mistakes, let’s look at what he has coming up:

—Next is Saving Mr. Banks, described as “a behind-the-scenes look at how the popular Disney film “Mary Poppins” came to be,” directed by John Lee Hancock and also starring Tom Hanks as Walt Disney.  This appears to be another CAA-packaged project.  Also has Emma Thompson and Paul Giamatti in it.  Ho hum.

—October will see the release of Seven Psychopaths, in which “a struggling screenwriter inadvertently becomes entangled in the Los Angeles criminal underworld after his oddball friends kidnap a gangster’s beloved Shih Tzu.”  Ensemble cast there including Woody Harrelson and Tom Waits, directed by Martin McDonagh.  Apparently yet another CAA package.  This is so much of a bigger ho hum they haven’t even released the trailer yet.

—He goes immediately from the Mary Poppins project onto Oscar-winning scribe Akiva Goldsman’s directorial debut, Winter’s Tale, co-starring Will Smith.  Both Smith and Goldsman are repped by… you guessed it, CAA.  This film is, “a fantasy story set in 19th Century and present-day Manhattan and revolves around a thief, a dying girl, and a flying white horse.”

Deck the halls with boughs of ho hums, falalalala-lalalala!

Colin, dude, I loves ya.  I will always go to bat for you.  I am not one to tell you what to do with your career, but if this next round of shoveling CAA crap doesn’t work, ditch ‘em.  Our world is changing rapidly, nobody knows where we are going, but you are clearly better off with something else, anything else, than following that old-school Hollywood path; it’s vanishing before our very eyes.  Whatever Nikki Finke and AO Scott say, and while you might not be able to open a film (but does anyone really these days?), you are still a star.  A bit dimmed, sure.  But there is a way to make that shine brightly again, and my feeling is it’s not by staying locked in the dark with the status quo.