Chozen: Please Give a Hearty Welcome to the First Truly Post‑Gay Character 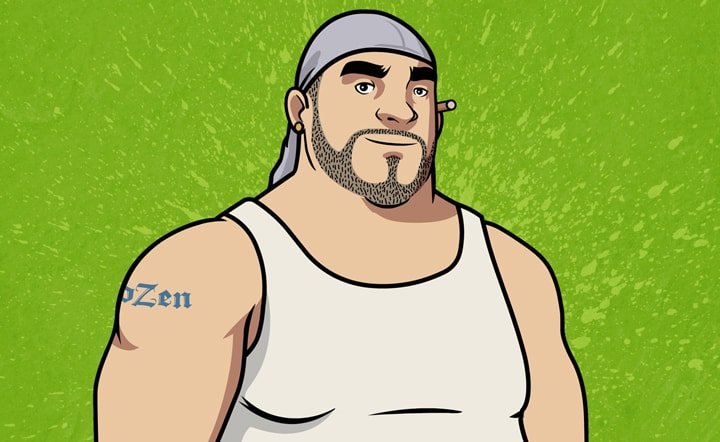 There was a curious, dull silence throughout my Facebook feed after the Grammys the other night. I would say that a healthy percentage of my friends — and they are for the most part real-life friends, so limited in number and with common interests — are involved in activism of one kind or the other. As far as I could tell, there was nary a comment about the mass wedding of thirty-four couples by Queen Latifah. In theory, this was an apotheosis of sorts, the ultimate commercialization of the gay-rights movement. In those seven rather-moving minutes, gay was finally and forever institutionalized in mass American culture like an inductee into a Hall of Fame.

Two years ago, when many of my Facebook friends changed their profile images to equality symbols, this would have been a huge deal. Those same people would have posted the YouTube clip of that segment of the Grammy show en masse — the comments would have probably included something about Madonna’s trampoline-tight face, or how wonderful it is she still bags hot younger men. But it seems my friends are finally battle weary. Like Ellen Degeneres, the general sentiment is we want to move beyond the fight and the labeling and just live integrated lives. That collective sentiment has taken cartoon form, and his name is Chozen. In his eponymous new animated show on FX, Chozen embodies a character I have been writing myself in various forms over the years, the post-gay Ghey. He is the reason I use the term ‘Ghey’ to begin with; it’s an appropriation from Little Britain that is meant to acknowledge my preferences yet distance me from mainstream gay culture, and goose that culture into not taking itself so seriously, which is admittedly and thankfully not a hard thing to do. Even if I am far too middle class to be a do-rag-wearing, ex-con, muscle-bear rap artist, Chozen is me: he is a top with predatory tendencies that are welcomed by his prey (otherwise he would back off); he is an uncompromising artist and a bon vivant who is unabashed, unapologetic about his alcohol and drug consumption; he is as vulgar and brash as he is kind and compassionate, fiercely loyal to his friends and family, and a menace to his enemies; he is a lone wolf with no gay identity who marches to his own beat and loathes being labeled as anything — indeed, shredding labels is part of what his art is about.

To that last point, you would think that, as a fiercely individualistic lone wolf, I’d be upset that there is finally a character who sums me up, who explains me, with whom I identify completely, whom I hereby choose to represent me. The reason I’m thrilled and not upset has something to do with another trait Chozen and I share: a certain justified vanity and healthy self-confidence, tempered by an underlying self-deprecation. In other words, I like what Chozen is reflecting as my mirror self, as my soul brother. I am proud of who we are. (Yes, that word ‘pride,’ so overused in gay culture because it’s more untrue than the word ‘gay’ itself. Pride has always an elusive sentiment for me with regard to my sexuality. Until now.)

In an abbreviated interview in Slate, Grant Dekernion, the creator of Chozen, disavows “trolling for outrage” with his character and his show. For instance, Chozen’s predatory tendencies are indeed borderline rape if looked at from a heteronormative perspective, but this is man-on-man sex we are talking about — to use a cliché, you cannot rape the willing; it’s just rough sex. And, as much as he likes it rough, Chozen has too many other options that make raping the unwilling too much of an effort. However, the eroticism of forced sex is played up and made light of, and that does walk a fine line even with me; in the real world, prison rape is a serious problem for the unwilling. However, just as much as Chozen objectifies and preys, he is objectified and preyed upon himself: Many people of both sexes want a piece of him — even his female parole officer accosts him aggressively in one scene. I think Dekernion is being disingenuous when he claims not to be trolling, but, as much as I loathe disingenuousness, I will allow him it. The reason I will allow it is I don’t see it so much as trolling as it is being truthful about certain kinds of same-sex relationships, and certain kinds of man-on-man sex. In the name of making Gheys more palatable to the larger culture, we have painted ourselves as ‘normal.’  Our martyrdom to homophobia has made us saints. But we are far from that; we can be as brutal, as amoral, as rapacious as any Str8, and Chozen declares it fiercely and refreshingly.

Slate: I love how the other characters sometimes respond to his sexual frankness with a momentary expression of discomfort. They love him, but they’re shocked.

Dekernion: I feel those are very real responses. I don’t see them as necessarily being attached to Chozen’s sexual identity. Bottom line: Chozen is an oversharer. I think a lot of us, if anyone we knew decided to just offhandedly give us a detailed description of their sexual trysts from the night before, we might stop short a little bit.

Like me, Chozen loathes bullshit, and slashes through his world with a sword sharpened by his brand of truth. His noble amorality is Nietzschean; in character he is the modern Übermensch, as a poet the modern Walt Whitman, another Ghey who defied sterotypes. But Chozen isn’t as all-embracing as Whitman; if you have a sacred cow, he is likely to grind it up for his fat-bitch hamburger, unless it will upset you unduly, in which case he’ll show compassion for you while asserting his right to eat a fat-bitch hamburger made from your sacred cow. I teach you the post-gay übermensch. Gay is something that shall be overcome.

To wit, in episode three, Chozen finally tackles the subject of the hero’s sexual identity. It has hitherto remained unaddressed — Chozen has simply swaggered through the show railing frat jocks and other young guys whenever he pleases, rapping about “dudes with smooth skin” without explanation or comment. [Spoiler] Having recently been released from prison, where he did a ten-year stretch after being set up by Phantasm, a nefarious rival rapper, Chozen ends up living on the couch in his sister’s college dorm room. He joins the school’s LGBT support group under the impression there will be an orgy, but it turns out to be a bunch of whining queens and bull dykes he has no time for. Still, he stays because there is a smoking-hot transvestite named Bobbi, whom he enlists to entrap Phantasm. But Chozen’s nemesis flips those plans by getting a hot, buff guy to drug and seduce Chozen himself. The next day, it turns out the buff guy is really a female-to-male transsexual clearly based on real-life personality Buck Angel, a musclehead daddy who still has a vagina. Later, Chozen admits to the LGBT safe-space group that he enjoyed the experience. When a more traditional Ghey asks him, pointedly looking at a list of possibilities, if he now identifies as bisexual, Chozen says,

No disrespect, yo, but I don’t even know what LGBT means.  Lesbian Guys Like Guys Bacon and Tomato? Call yourselves what you like. Own that shit. If that feels good, do it. Me, I’m just Chozen, and I am a sex person.

Up until then, I was already enjoying Chozen, already texting the one friend I have who is most like me, enjoining him to watch this show, “It’s about us! Incredible!” But when Chozen spoke those words to an audience representing a fair sampling of the non-heterosexual world, the show became to me what Glee is to musical-theater queens. My personal Übermensch had spoken his manifesto and, verily, I saw it was good.

It’s interesting but not surprising that Derkernion is straight. For my money, straight people create the best gay-themed content, i.e., Ang Lee with Brokeback Mountain and his earlier, audacious-for-the-time Wedding Banquet; Steven Soderbergh with Behind the Candelabra. Perhaps it’s because gay entertainment people are too close to the subject, but I also suspect the effectiveness of the show and the character in particular is because Derkernion casts himself as what he would be if he had a sexual appetite for men. And that’s why Chozen embodies how I always define myself: as a straight man who happens to fuck men.

The City of West Hollywood, home to probably the most powerful gay neighborhood in the world, recently caused minor outrage by removing the rainbow flag in front of City Hall. “It has flown there proudly for nineteen years!” lamented a more traditional-Ghey friend on Facebook. The blame was placed squarely with the insensitivity of the City’s new straight mayor. But the mayor is right. “I’m sorry, but good riddance,” I replied in the comments of the outraged Facebook post. “Time to move out of the ghetto, boys. Straight people live here, too.” I can’t stand that flag from a simple design point of view: it’s garish, an eyesore; it reduces a worthy cause to the look of frivolous Lifesavers candy; it is proof positive that Gheys have no more style or good taste than Str8s. But having it fly over a government office is no different than having the Ten Commandments chiseled in stone outside a courthouse in Oklahoma.

Welcome to the post-gay world, my people. Chozen is leading the way out of the ghetto with no commandment in hand other than, “Be thyself, not how others are or how they expect you to be.” We are now a part, not apart, and that allows us to be as individualistic as Str8s without the relentless labeling, those bacon-and-tomato acronyms, the parades, that candy-colored flag. In one way or other we have all fought for the right to a post-gay identity. Enjoy.