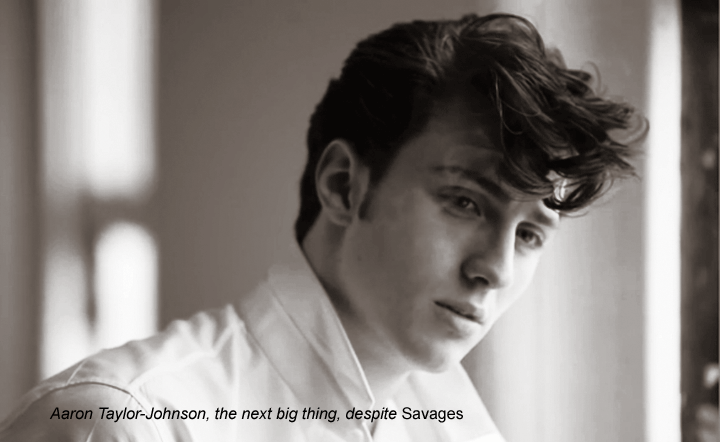 Stone’s putative greatness conveys the false feeling of a Greek tragic hero’s; he is forever railing against the gods, and seems barely to come out alive at the end of a production, although I suspect I’m stretching the Greek tragedy analogy in order to make another point: his work is often so hubristic as to be pedantic. A far cry from Frida Kahlo.

There are two tragic flaws in Savages: the script, specifically the voiceover, and the actor behind that voiceover, Blake Lively.  The way the narration is written is jaw-dropping in its triteness and puerility: aside from the slothful butler-and-maid exposition throughout, it bookends the film with this pseudo-philosophical tripe reminiscent of a twenty-five-year-old first-time screenwriter who isn’t yet aware that commercial filmmaking is not the place to be fully self-expressed, even if that self were worth expressing in the first place.  I was convinced Stone had co-written the script with two kids—writing partners Shane Salerno and Don Winslow, on whose novel the script is based (apparently it is unreadably pretentious)—in order to somehow regain a hip relevancy with the younger crowd.  It came as a surprise to me that Salerno and Winslow are actually in their late thirties and forties.

The first ‘exit line’ I heard (and by that I mean it made me want to get up and leave the theater) was right in the beginning when Taylor Kitch’s character, Chon, is banging the daylights out of Lively’s, O, short for Ophelia… please, let’s not go into that aspect; there are only so many times I can use the word ‘pretentious’ in a single review.  Said exit line, part of her hackneyed, acned voiceover, was, “I had orgasms, he had war-gasms,” a reference to the fact that Iraq vet Chon was trying to fuck the horrors of war out of himself.

I didn’t just want to leave, I wanted to stand up from my favorite seat, C-22 in the handicapped section of the Arclight Hollywood, and hurl my large Diet Coke at the screen.  (Not the peanut M&Ms though, they were a treat.) The famous C-22 is the same in each of the Arclight Hollywood theaters.

Savages is a study in the difference between TV and film actors, and for that lesson I am eternally grateful to Stone.  It’s almost as if some TV actors pixelate and break apart when they are blown up big like that.  I regret that I have to use the word pretentious again here in reference to Lively’s performance, but there is nothing in the Thesaurus—not ‘artificial,’ not ‘magniloquent,’ not ‘sophomoric’ (although that comes close)—that can quite match how irritating and unbelievable she is.  And that is what brings the whole film down: she is the pretentious narrator of the pretentious voiceover that is a major portion of the dialogue in the script.

Lively is an ironic last name for a young woman who is so deathly bland.  She’s so unlikable that I was relieved when she was kidnapped and tortured.  I just couldn’t believe these two guys were so in love with her; it isn’t just because I am gay that I would rather have seen Kitsch and his best friend/business partner Aaron Johnson get real and Brokeback with their relationship once she was out of the way.  I’m sure many straight men in the audience felt the same way; yeah, she’s beautiful, but as the relentless shots of the babes on Laguna Beach tell us, there are plenty more fish like her by the sea; she’s certainly not worth all that effort (small militia included) and thirteen million dollars ransom and a stake in your super-duper weed-growing business.  But if she’d been Brit Marling?  Definitely.

As your screenwriting teacher will tell you, you’ve got to “ratchet up the stakes” whenever possible in a film like this, and one of the devices the writers use is that O won’t be able to withstand a few days as a hostage, much less the entire year, as stipulated in the ransom requirements by Salma Hayek’s character, la madrina (yes, ‘the godmother’) Elena, head of the Baja Cartel.  What makes this completely unconvincing is that Lively is by nature the opposite of the damsel in distress.  She looks like this tougher-than-a-cockroach proto-Aryan who would be the only survivor of a nuclear holocaust.  Better to have kidnapped Aaron Johnson’s Buddhist do-gooder character, Ben, and have the other two in the triangle relationship go looking for him.  Now that would have ratcheted up the stakes, and really explored the dynamic of a bisexual, polyamorous relationship.

Indeed, the themes in this films are so important, so relevant to what is going on in America right now—the acceptance of ‘different’ romantic relationships, the wrong-headed, blood-lusty war on drugs—that you want it to be great, to say something new.  But even Stone understands that he is merely rehashing what is already being done better on TV in Breaking Bad—sorry, I forgot to mention that as the fourth in the mash-up of references at the beginning of this review.  So he makes nudge-nudge-wink-wink jokes all the way through. You have no idea how happy and filled with longing this image makes me.

Stone even casts Demián Bechir from Weeds to reprise his role as a Tijuana-based cartel honcho, and has Benicio del Toro sucking on an iced latte from Starbucks at the scene of a massacre just like Mary Louise Parker’s character in that same show.  But it’s not funny, or germane, doesn’t shed new light on an important subject, as the aforementioned teacher would have required in the screenwriting course neither Salerno nor Winslow seem to have attended.

Having said all of the above, and feeling now like a lazy lion licking his bloodied chops after eviscerating a lame, tired old gazelle, I have to say there are some worthy set pieces in Savages and some stand-out performances.  Given that it’s an ensemble piece, let me list them:

Taylor Kitsch:  I know it seemed like I was done eviscerating, but not quite.  Don’t get me wrong, I desperately want to like Kitsch.  I have been rooting for him all summer.  I tried to seem him differently in John Carter, to blame the failures of that film on something else, anything else.  I loved him in Friday Nights Lights, but it is pretty clear from a summer of flops, which includes Battleship, that a movie star he is not.  Just as his rival Channing Tatum, who should have been given Kitsch’s role in Carter, has proved that he is worthy of the big screen and can open a film by pulling off a hat trick this year with three colossal successes in a row, Kitsch has had more than enough chances and should now go back to TV.

Aaron Johnson: If you want to see the stark difference between big- and small-screen actors, watch Johnson next to Lively and Kitsch.  It’s like one of those clever optical illusion tricks from online: stare at these three things side by side for the next two hours, tell me what you see.  Yes, they seem to be equal at first, but they’re not.  One of them eventually grows far larger than the other two and takes over the show.  That would be Johnson, the next James Franco/Ryan Gosling/Ryan Reynolds all in one.

Salma Hayek: This film isn’t just about Mexicans versus Gringos (they both regard each other as savages), big-screen actors versus small, it’s that middle age is so much more fun than youth, which makes the relentless complaining about it seem idiotic.  Nothing picks Savages up quite like cutting away from Lively to Hayek and her magnificent rack.  It’s hard to believe she is forty-five years old and therefore conceivably the mother of grown children, as she is meant to be in the film.  Lookin’ good, Salma, and acting even better. Going in with both breasts blazing.

Benicio del Toro:  Now here is one formerly sexy motherfucker who is letting himself get as ugly as he can be, and yet is still was watchable as ever.  I wanted to feel more threatened by him than I was, rather than expecting him to wink at any moment, giggle and pour me another drink.  He’s the least believable sociopath in film history.  That’s because Stone insists on stripping the film of any serious threat by being intermittently silly.  Doesn’t matter: Del Toro has already made this film, again a much better one, as the lead in Traffic, so he plays around a great deal more with this role, especially when he’s in a scene opposite a ham and cheese sandwich and,

John Travolta:  With all of the massage scandals and Scientology bashing going on these days, it’s hard to wish old Johnny Boy well, but you do the minute he steps on screen.  He’s just so good, so much better than Tom Cruise that I wonder why I just made the comparison.  Here he is without his hair piece, looking every year of his fifty-eight, sallow makeup, harsh sunlight and all, and you forgive him for (probably) being a randy closeted homo who is so very hungry for dick, but has to resort to molesting masseurs on cruise ships because of his enormous fame, all of which he deserves, unlike Cruise.  Travolta is a very talented man.

Other than the fact we are in the middle of summer and there is little else out at the movies to engage the middlebrow mind—I’m not sure the highbrow goes to the movies at all any more—there is no reason to see Savages.  Still, it is an Oliver Stone film, which means it’s well crafted, beautifully shot and edited, and again some of the set pieces are great.  For those reasons, I upgrade it from a Meh to: