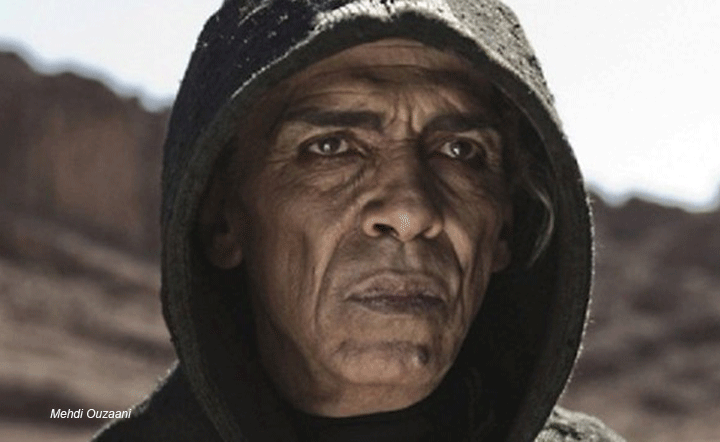 There was a minor outrage earlier this week after The History Channel’s The Bible aired an episode that showed Christ’s temptation by Satan.  Right-wing weeper Glenn Beck noted in a tweet, “Anyone else think the Devil in #TheBible Sunday on HIstory Channel looks exactly like That Guy?”  Beck appears to have a problem saying the President’s name, which I would call puerile if that adjective weren’t tautological when used in the same sentence as Beck, and if I didn’t have the same repulsion towards Bush 43 when he was in power; if I accidentally landed on a station showing his image, I would dive for the remote and switch channel.

Satan is clearly in the eye of the beholder.  Beck makes a physical comparison that would simply never dawn on me because I don’t think of Obama as being in the least satanic.  But had Will Farrell, who spoofed Bush 43 on Saturday Night Live, been cast as the Devil, perhaps I would have.

Of course, a flurry of comments and tweets and HuffPo “articles” appeared about the casting of somewhat Obama lookalike Mehdi Ouazanni as Satan, compelling the producers of this disappointingly successful show, Mark Burnett and Roma Downey, to issue a forceful denial:

This is utter nonsense… The actor who played Satan, Mehdi Ouzaani, is a highly acclaimed Moroccan actor. He has previously played parts in several Biblical epics — including Satanic characters long before Barack Obama was elected as our President…. [We] have nothing but respect and love our President, who is a fellow Christian… False statements such as these are just designed as a foolish distraction to try and discredit the beauty of the story of The Bible.”

My immediate reaction as a filmmaker was that husband-and-wife producers Burnett and Downey were being disingenuous.  Their Christ, played by Portuguese actor Diogo Morgado, is blond (or at least a very light brown—you’ll have to ask his colorist), and Satan is being played by a black man, a dangerous stereotype, never mind the resemblance to the President.  As I commented to a few people while pondering this interesting dilemma from a production standpoint—I’ll go into those details in a moment—if you are really going to be realistic about which race should play which role simply by the good deeds/suffering versus the evildoings of individual peoples, then Christ should be Congolese black and Satan as blond as Hitler’s wettest wet dream. Then there was a related issue that soon sprang up in mushrooming memes: Why is this claptrap being aired on The History Channel in the first place?  Well, it is that time of year, you know, the Easter/Passover thing.  No more goofy Santa-and-reindeer fare. Time for the vernal equinox, for the death of winter as symbolized in the brutal torture and killing of Christ, and all that malarkey.  So it is somewhat relevant to history in a seasonal way, if this were presented as an overview of Judeo-Christian myths, which it isn’t.

The Bible is a docudrama, with a heavy emphasis on the drama.  Most egregiously, it’s accompanied by a sententious, sonorous voiceover; the reenacted footage is given artificial credence because the narration sounds exactly like the script for, say, a documentary about something that really happened, like World War II, when all of those satanic blond people martyred millions of Jews and gays and… I’m getting tangential again.

Back in 2004, when Mel Gibson’s The Passion of the Christ came out, I was discussing the remarkable box office figures with a producer friend of mine in London who was quite familiar with the gang over at Gibson’s Icon Entertainment, which financed the film (and which uses a detail of a Russian icon of Christ as a logo).  I made some naïve comment about how Gibson is so devout, and how lucky it is that his dream project, in Aramaic no less, was such a colossal hit, one of the biggest earners of all time.  The producer snapped, “Bollocks.  It was done for the money, pure and simple.”

From the few articles I’ve read about the casting controversy, Burnett and Downey also see themselves as devout.  I certainly imagine there has to be some devoted emotional  and psychic buy-in to the subject they have decided to bring to the screen, but it would be likewise naïve to think they did it purely for “the beauty of the story.”

I did watch a part of the offending episode in which the supposed Obama lookalike makes a brief appearance.  He’ll probably come back this Sunday when Satan supposedly tempted Christ on the cross, also the basis for Scorsese’s The Last Temptation of Christ, in which Satan was cleverly portrayed as a beautiful little blond girl.  (Makes sense: you would think Satan would have the wile to present himself as being alluring and cute, rather than as frightening and unappealing as Ouzaani.)  Having seen so many of these Biblical shows throughout my life—I admit to rather liking them as a kid, but I also read Lord of the Rings thirteen times—I knew to skip forward to the point where Christ is in the desert and a serpent of some kind appears.  This is fortunate because all of these years later the kind of show that used to hold me in its thrall as a dreamy child prone to elaborate messianic fantasies now repulses me.  Such is the miracle of evolution. Satan in “The Last Temptation of Christ.” Aww. I’d buy her a chocolate shake.

Like Temptation, this piece was shot in Morocco, seemingly the favorite location for many Biblical films.  This is no doubt because after all these productions it has a reasonable filmmaking infrastructure and is also cheaper than shooting in the real Holy Land, the most misnomered place in the world; it’s more like Bane-Of-Our-Existence Land for all the trouble its holiness has given us over the millennia.  Morocco also has a number of structures in good shape that look ancient, whereas the Middle East retains little of that sort of past in its modern architecture.  And I’ll bet shooting in Jerusalem is an absolute clusterfuck for all sorts of reasons, especially when you’ve got a religious show going up.

When I first read the stories and comments about the casting of Ouzaani as Satan, I was inclined to believe that the move was indeed deliberate and that Burnett and Downey’s denials were just another Hollywood lie among many serpent’s tales.  Like Gibson, they are fully aware of who their audience is, and most of them didn’t vote for Obama.  Why not stir the shit if it will draw attention to your show?

The reality probably favors the producers’ denials, however.  The role of Satan is miniscule, and in a case like this if you can cast locally and not have to fly an actor in and accommodate him, then you should.  Ouzaani does have a wonderfully gnarled Sith Lord face—I would certainly consider casting him without ever thinking about the likeness to the President, especially if that president were unlikely to be in power at the time it aired.  That is, if I were ever going for something obvious, which I wouldn’t; I’d be more inclined to cast Satan as attractive and seductive, like Scorsese did.  But this is no subtle or well-thought-out production by any means. On the contrary. If I would have any hesitation it’s because Ouzaani is a North African with a great deal of black in him.  While Muslims also believe in the same Satan as Jews and Christians, the fact is this story is Middle Eastern and therefore all of the characters should belong to that gene pool, if we’re to have any “realism” about this at all.  Casting a black man as Satan, who is the incarnation, albeit a fantastical one, of the dark side of human nature, is stereotyping black people.  Still, in a pinch when casting a minor role, and with all of the other production mess going on around me, I probably would have turned to a couple of African-Americans on the team, made sure they were okay with it, they likely would have said yes, and I would have gone with Ouzaani.  And worried more about the fact he probably had to learn his lines by rote, as is evident from the little dialogue he has.

I can’t even say that this “issue,” if it is indeed one, is as bad as casting a mincing queen as a gay character; the fact is there are more fem Gheys than there are butch.  In a meeting about a script of mine a few years ago, a super-progressive straight producer who is sensitive to LGBT issues asked, “Does the villain have to be gay?”  I immediately replied, “Yes.  I’ll answer for it.”  In other words, I was saying that as a gay man as well as the writer, I would answer to GLAAD when they come after us for presenting a Ghey as evil.  It’s an incident that demonstrates that we do take these questions into consideration in casting, as I’m sure Burnett and Downey did.  At the end of the day, production expediencies and the fact Ouzaani is creepy and satanic-ish in the way they saw the role won the day over concerns about stereotyping.

But the Obama resemblance?  That’s merely a minor victory for Glenn Beck.  As the stereotype of a middle-aged, white, out-of-touch right-wing on-air personality, he needs all the attention he can get.