The last time I went to a midnight screening of a movie was last century when David Lynch’s Dune opened.  I’d been a huge fan of the books since about twelve, so I had to get in line to see this.  But it wasn’t even a midnight screening, it was at midday, and the movie was such a mess that they had to tack an intro on the beginning and hand out a glossary of terms at the screening.

Unlike his fellow handsome hobbit, Tom Cruise, Hunger Games' Hutcherson has believable range of emotion and depth of performance.

This is not the case with The Hunger Games, which your faithful movie bitch caught last night at the Arclight Hollywood, where it was playing on all fourteen screens, plus the Cinerama Dome, and all were mostly sold out.  Still, I managed to get one of my favorite seats in the middle of the handicapped section so that I could not only stretch my legs out, I could cross them like a proper intellectual reviewer on a PBS program or something.

I didn’t realize until last night that this complete screen saturation is an honor the august Arclight bestows on mega-blockbusters, like the Harry Potter, Batman, and Twilight sequels.  Note that they are usually sequels of successful franchises, which Hunger Games notably isn’t.  But those dastardly box-office trackers are as usual completely spot-on: the tally is in and Hunger Games grossed twenty million last night, the highest ever for a midnight screening.  It’s already a juggernaut, and may cross one hundred and fifty million by Monday.

Just as John Carter being a flop was news, this kind of success is notable and therefore has to be part of PFC’s weekly roundup.

Is the hype and success deserved? For the most part, yes.  Director Gary Ross has pulled off a well-crafted, engaging roller coaster of a movie, which keeps you on the edge of your seat not so much with what you’re seeing but with the expectation of what you might see, specifically horrific violence towards children.  But it only milks that  threat and tastefully sidesteps anything too gory.

For those who have somehow managed to avoid reading or listening to anything about the story, in a dystopian future not so far away, the twelve proletarian service communities surrounding The Capitol of the former US had an uprising, lost, and now must play a tribute of two teens, a boy and a girl, to the aristocrats in the great city for a reality elimination show, a death match to the last boy or girl.  When her twelve-year-old sister is chosen, Katniss Evergreen (Jennifer Lawrence, the Oscar-nominated star of Winter’s Bone) from the coalmining district volunteers.  The thing is, Katniss is an accomplished hunter and natural sportswoman, so she instantly becomes the hands-down favorite, and given more obstacles and adversity than normal contestants.

"Sarah Burton, if you're out there, you're desperately needed in wardrobe."

I have seen the future, and apparently what is most dystopian about it is it’s incredibly tacky.  I haven’t read the Hunger Games books, but I hope they specifically state that everyone prances around looking like a styling collaboration between Tim Burton and Dr. Seuss via Pixar—nobody’s hair color is his own, not even the pets’ fur, and it is only dyed in vibrant pastel hues.  This appears to be a world devoid of fashion sense or fashion designers, just hack stylists who have raided the secondhand stores and rock-and-roll boutiques of Melrose Avenue and mashed it all together in the misplaced hope of getting Lady Gaga’s attention.

The Capitolists also live in a vast gleaming Glendale Americana Mall devoid of character, advertising, or any sort of diversity.  As garishly individualistic as its denizens are, the Capitol seems to have been designed by a single architect, who would have been right at home creating those awful sprawling post-modern Disney complexes from the late 80s.  This isn’t going to win any awards for production or costume design. 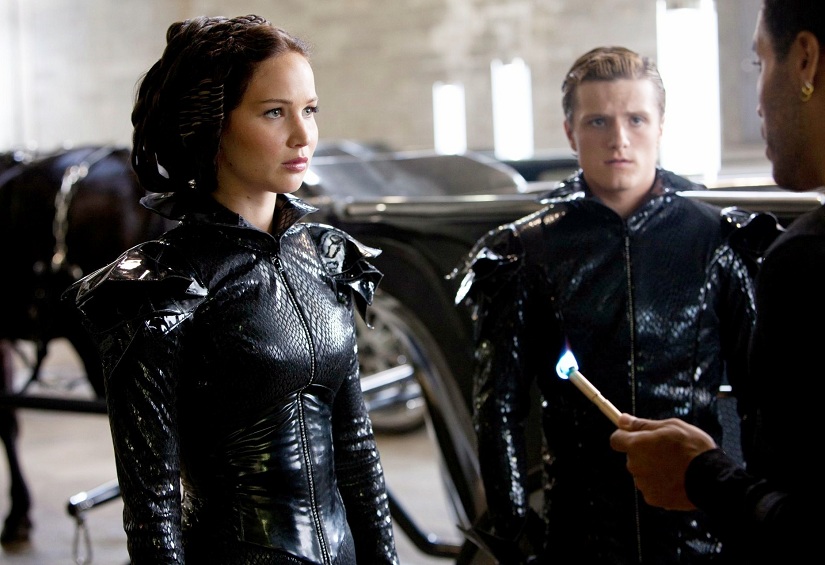 Klaus Nomi eat your heart out: stylist to the martyrs Lenny Kravitz dresses Jennifer Lawrence and Josh Hutcherson as flaming lumps of coal. Emphasis on flaming.

Director Gary Ross seems to hate CGI; it’s evident that he would rather have shot the whole film in camera without any effects.  Unlike John Carter, where the effects are so seamlessly integrated into the live-action, the Capitol scenes in Hunger Games are so cartoonishly done it almost feel like you’re watching Logan’s Run in this day and age and being asked to find it credible. On the other hand, the faux Depression-Era sequences and the Hunger Games themselves in the woods are believable and dynamic.

Ross loves a giddy camera, and wields it well.  Some of my favorite moments were those seen from Katniss’ P.O.V., where she had to go out on stage in front of the screaming, glittering rainbow crowds.  I even had a flashback of that surreal moment when I hosted the Miss India Pageant: I emerged from that giant peacock to face a sea of brightly hued saris and dazzling bling; snipers on the roof of the venue, K-9 squads in the audience to protect us from terrorist attacks.  Bright lights blinding me, it all went blurry and I thought to myself, “What the fuck am I doing here?”  Yes, very authentic.

Jennifer Lawrence is great, basically reprising her role from Winter’s Bone for a big-budget Hollywood studio extravaganza. Woody Harrelson is more enjoyable than he’s been in years, as is Donald Sutherland, both with eyes clearly on fat Harry Potter-ish paychecks from future sequels for their retirement funds.

"But Alan Ball said I was the best of my generation!"

The others: Lenny Kravitz is a dreadful wooden block, as boring as watching someone else’s opium trip; Elizabeth Banks does the best she can voguing Ab Fab lite with no bite; Stanley Tucci does Stanley Tucci in a blue Mozart pompadour wig and George Washington white enamel wood dentures (really didn’t get that touch); and Wes Bentley from American Beauty—ah, Wes, Wes, wherefore art thou, Wes?—manages a passing grade for his dazed performance as the not-very-villainous producer of the show.  But it must be so hard to perform wearing a ridiculous, supremely un-cool Tim Burton topiary beard, although I’m not sure Wes can play anything other than dazed with those heroin-addict crystal eyes.

The only reason Hunger Games is compared to The Twilight Saga is because of a female lead and the fact it’s based on a popular young-adult series, also written by a woman; in a bizarre twist of literary fate, it seems you can’t succeed in the fantasy genre any more unless you’re female.  But the comparison stops there.  I find the Twilight films risible, phony and unwatchable, but Hunger Games is well worth seeing, great bang for the buck.

I’d give it a Wow if I were a teenage fangirl, but I’m a big bad middle-aged wolf who needs more substance, so I give it a:

Now the band Rush (no relation to Limbaugh) have jumped in with their own demands he stop using one of their songs.  Unfortunately, according to Rolling Stone, Limbaugh is covered and can simply thumb his nose at those outraged pinko liberal musicians.

“Radio networks are covered under blanket agreements for “public performance” of all songs in the publishing catalogs of ASCAP, BMI and, in the band Rush’s case, SESAC, the Society of European Stage Authors & Composers,” writes James Sullivan.  “The fact that Limbaugh’s show has a political agenda does not interfere with his right to play music, so long as it’s paid for.”

We certainly won’t let anyone interfere with our right to suggest more music for Limbaugh. In honor of his imagined acorn dick, and his ability to spin malicious falsehood into pseudo-political rhetoric, PFC recommends Alvin and the Chipmunk’s version of the band Dope’s version of ‘Spin Me Round (Like a Record, Baby).’  It is really quite dope:

One guy who not only doesn’t have a small dick but has a huge set of balls is Tartan High School senior Mike Stone from Bumfuck Oakdale, Minnesota.  The guy hasn’t had it easy in school.  Saddled with a pronounced stutter and an appearance that isn’t exactly Tim Tebow’s, he was probably actively bullied by the guys, and definitely passively bullied by the girls: no fewer than two dozen of them refused to be his date to the high school prom.

Of course, his school is refusing to let her attend, which is several shades of wrong.  If I had the Twitter clout with more than the paltry amount of followers I have, I would launch my own campaign to help @MadMike42948 overturn the school’s bigoted ruling (on grounds of “disruption,” of all lame things).

I think it’s absolutely wonderful that Ricky Martin and his partner of four years Carlos Gonzalez Abell made an appearance in Vanity Fair Spain with their twins, Matteo and Valentino.  The problem with the photo below is I can tell the twins themselves apart—they’re fraternal—but not Ricky and Carlos.

It was one of the old myths about homos that we were made this way through nurture by having diva moms, and because it was some sort of narcissistic wish-fulfillment that we wanted to have sex with ourselves.  I don’t know what Ricky’s mom is like, but he’s certainly going old school with the second part of the theory.

There’s no Schizo of the Week, I’m afraid, unless you allow me to award it to an island in the Caribbean, Dominica, which arrested a gay couple for having sex on the balcony of their room on a cruise ship, despite having been together for seventeen years.  I have trouble retaining sexual interest in a partner after seventeen months.  I heartily salute Dennis Mayer and John Hart for still digging each other enough to get it on al fresco after all that time together.

Don’t you just love their tanks tops, despite the traumatized expressions?  We have to smack around Celebrity Cruises, too, for turning over the hapless duo to police saying, “We have zero tolerance for that sort of behavior.”  Oh, please.