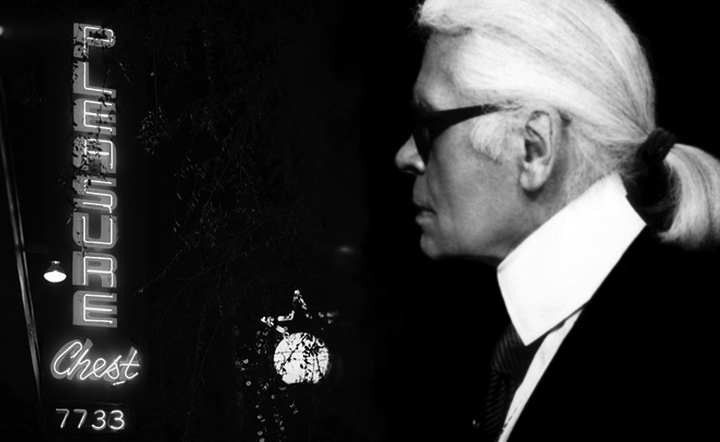 Whenever the Paris collections roll around, I’m reminded I haven’t touched base with my imaginary best friend, Karl Lagerfeld.  As some readers may recollect, he and I have had our discussions—none of which have ended well, sadly—first over a gourmet sandwich, then at rock-n-roll Ralphs in Hollywood (during which he tried to brain me with a canister of Ajax), and over a workout at Golds Gym.  Today I again changed venue with the hope things would end amicably with the crotchety old styliste, for once.

I wrote a caption the other day for picture embedded in my review of Pablo Larraín’s film No: “Love can be the cruelest dictatorship of all.”  That line has been haunting me ever since.  And when I’m haunted, there’s no better person to exorcise the ghosts than Herr Karl.  He’s so practical with his advice, especially for a fashion designer.

I decided the most appropriate venue for our encounter would be the renowned Pleasure Chest sex shop on Santa Monica Boulevard in West Hollywood.  I figured such a hedonistic environment might shake his Germanic steeliness loose.  I was envisioning a discussion along the lines of Alcibiades’ with Socrates in Plato’s Symposium, but… Well, maybe I got a modern version of it. “You always do this to me,” Karl sniffed as he pushed his sunglasses back on his nose when he met me at the entrance.  “I’m in the middle of doing press, basking in the excellent reviews of the Chanel show, and you drag me here to this… immonde place.”

I knew he was fishing for my opinion on the collection shown this week at the Grand Palais.  “The sets were certainly spectacular,” I said as diplomatically as I could.  “That huge globe with the map mirrored on the floor.  Wow.  Grandeur at its grandest.  You could barely see the clothes.”  Which for the most part wasn’t such a bad thing, I thought to myself.

The thing is, when you think to yourself with an imaginary friend, he can hear you, a conundrum schizophrenics face regularly.  Luckily, ol’ Karl has a thick skin, and he deployed his usual trick: To change the subject.

“Mein Gott, what are these?” he asked, pointing a leather-gloved hand at the rack in front of us.

“You know what they are,” I replied. “Jockstraps.”

Karl picked up a packet of backless very tighty whities and examined it, feigning disgust.  “Looks like one of those things David killed Goliath with.”

“Or… something He Who Should Not Be Mentioned would design for his men’s collection, maybe worn over torn, distressed jeans with fur trim.”

“Who is that?” I asked disingenuously.

“Shhhhh!” Karl hissed like an actor who has just heard the word ‘Macbeth.’  He crossed himself to ward off the evil eye.  “We’re all only a comment away from the same fate.”

Especially if you’re German, I thought.

“Precisely,” he replied to my thought.  He’s still sensitive about his fat comments and Adele.

“I thought we’d discuss love,” I said as he moved towards a counter displaying little glass vials that Alice might have sampled had Wonderland been a sex club on Sunset.

“Ah, love.  Such a beautiful thing.  Always a fabulous theme for a spring/summer collection.  That and gardens.  Love in the garden is even better,” he said, admiring the vials.  “Oh, look. Perfume.  We should sample,” he proclaimed, and snapped his fingers to get the shop assistant’s attention.

“Actually, those are poppers,” I explained, not believing for a minute that any queen who thrived during the 70s would have no idea what a bottle of poppers looked like.

“Actually, it’s video head cleaner,” snapped the overweight hipster shop assistant, irate at having been finger snapped by Karl.  “State law requires everyone to call it that.”

“Oh.  How modern.  I’ll try that one,” Karl said, pointing at the most expensive vial, of course.  “I love the smiling pig on the label. So Shwarzwald.”

I quickly paid for the vial rather than wither any longer under the gaze of the unimpressed shop assistant.  That beard and the piercing through his nose… It was getting a little too farm in there.  Karl cracked it open like an expert and took a deep hit.

“Lovely,” he sighed before taking another deep sniff with the other nostril.  “Want some?”

“No, thanks,” I demurred.  That shit gives me a headache, and I have no need to relax my sphincter during sex because… well, ain’t never gonna happen.  I’m just not modern that way.

The kaiser steadied himself on my arm. “Are you in any shape to discuss love?” I asked.

“Of course, darling,” he said, now friendly than he’d ever been.  “What better way is there to be to discuss l’amour than after you’ve partaken of the head video cleaner? Ooooo, was is das?”

“Carry on, darling,” he said.  “I’m listening.”  He’d never called me darling, much less twice in as many minutes.  I felt as loved as a fashion editor backstage after his show.

“Well, for example, what about unconditional love?” I asked.

“Do you think it’s possible?”

“Don’t be silly.  Of course not.  Love should have conditions.  As many as possible, in fact.  ‘Either you eat your peas, or mommy won’t love you.  Either you change your way of being, or I won’t live with you.  Either you buy me that gorgeous Chanel ensemble from the fall/winter 2013 collections—which was so amazing I could just die for it, by the way—or you’re getting no pussy tonight.’  That’s real love because that’s realistic.”

“So… pliable,” Karl mused as he gripped it firmly around the base and examined it closely.  I took half a step back; Karl with anything resembling a truncheon was a dangerous thing.  “This might fit…” he muttered.

“But don’t you think a healthy relationship should be based on unconditional love, or there should be no relationship at all?” I asked, trying to get us back on topic.

“Listen, unconditional love is for saints, and nobody likes to be with a saint.  They belong in caves, wearing fur jockstraps and praying to God.  Not in relationships.”

“Hmmm,” I murmured, immediately remembering what an ex of mine said when we were breaking up: Do you have any idea how stressful it is being with a saint?  It was then that I decided that strict adherence to an arduous Eastern spiritual path wasn’t conducive to a productive romance, and I should relax with the Puritan-soul thing a bit.

“Bah, give yourself a break on that one: He was Latino,” Karl replied to my thought.  “Latinos make Satan seem like a saint.  They have the spouse—that was you—for show to the family, ‘Look how stable I am!’  Then there’s a mistress, and another mistress to cheat on the spouse and the primary mistress with, and the hooker on the corner he bangs to let off steam after his four-hour workday.  They’re all Fellini 8½, or they try to be.  Different standards, and you didn’t stand a chance.  Anyway, let’s face it, darling: Saints aren’t sexy, except maybe when they’re stretched out on a rack being tortured.”

“I’ve just finished a script I was commissioned to write, and it’s a love story that takes place over twenty years or so, but it doesn’t really work out…”

“And I’m wondering if it’s possible.  To love someone so passionately for that long.”

“It’s not impossible.  Does it work as a film?”

That might not be such a bad — but I stopped myself from thinking the rest.  Again: irascible German designer + drugs + eleven-inch porn-star truncheon = broken nose.

“Then what’s it got to do with you? ‘All that matters is what you see on the screen,’ as Alfred Hitchcock said.  Your hero is as crazy as his love interest.  She is crazy on the surface; he is crazy inside.”

“He doesn’t give up.  He keeps hoping, trying, believing.  As Einstein said, ‘The definition of insanity is trying something over and over that doesn’t work, but expecting a different outcome each time.’”

“Whatever.  I’ve made my point.  Love is crazy, period,” he said as he took another hit.  “It’s more ephemeral than fashion.  It’s an emotion, a chemical reaction, wires crossing and uncrossing.”

“You repeat the same thing every season, sort of,” I said heedlessly.  “You riff on the same silhouette and pattern created by a designer over half a century ago.  How is that not crazy?”

And with that Karl vanished, leaving me in that sex shop alone, head flush with amyl nitrate, holding an eleven-inch latex phallus and a half-empty bottle of video head cleaner.

I feel closer to him than ever.