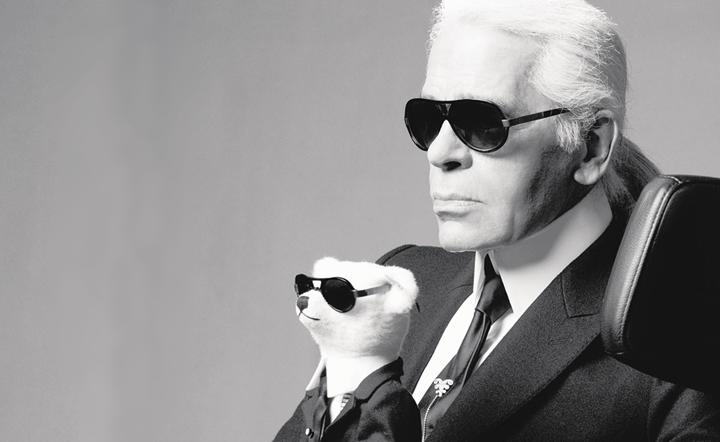 Over drinks the other night with Dame Bea and Tyler Kimball, my roommate, the psychic medium Gil Alan, was asked if I disturbed his peace at all, seeing as we both work from home.  “Not at all,” Gil replied.  “Except sometimes I can’t tell if he’s talking to me and mumbling, or just talking to himself.”  The scary truth is I am becoming more of a Hollywood schizo every day and having lengthy conversations with myself, utterly oblivious as to who might be watching me.

As long as I am displaying the outward signs of incipient mental illness, I’ve decided to embrace it.  In true American post-Oprah fashion, I refuse to be the victim and want to take charge of what’s left of my destiny by choosing my hallucinations before they choose me.  Therefore, I have decided that my inner muse, my mentor, my political advisor, that invisible large white bunny who shall stand beside me for a chat in the condiments section of Ralphs supermarket shall be none other than fashion kingpin Karl Lagerfeld.

After giving him the job, I decided to invite him for lunch in West Hollywood, at a discreet gourmet sandwich shop where people wouldn’t be alarmed by his zany outfit or by me talking to myself and possibly having a heated argument with my new guru; after all, I did insult him in last’s week’s roundup.

“Thank you for joining me,” I said to Karl as we sat down at an outdoor table.  I had already placed an order and had a vibrating coaster that would summon me to collect it at the counter once it was ready.

“Like I had a choice,” Karl sniffed back.  “You blogueurs think you can do anything these days, even take over someone’s life like a pirate, when I have so much to do, so many things to design.  The Paris collections are two weeks away!”

“Oh.  I thought you had that sour look on your face because I pissed you off with my comments last week.”

“The one you’re wearing right now.”

“I only have one expression: pouty, sensual, mysterious.  I call it ‘Prussian passion.’  You’re reading too much into it, as usual, the way you do everything, I might add. Anyway, as if I had time to read your drivel.  What did you write about me?”

“I said you were ‘that most fatuous of all gay subtypes: the fashion ninny.’  I then went on to speculate that you didn’t have sex any more so properly speaking you aren’t gay.”

Karl sniffed and turned away.  You can never tell what he might be feeling because those permanent sunglasses hide his eyes, which as we know are the windows into the soul.

“That is quite hurtful,” he said after a moment, passing a gloved finger under his nose as if pushing back a tear.

“Well, like you said, few people read my stuff, but everyone read that you said Adele was ‘a little too fat.’”

“But she is.  And she should consider breast reduction surgery, too.  Did you see that cover of American Vogue?   Mon dieu.  They probably had to take that dress apart and stitch her back into it, those knockers are so huge.  American Vogue is such crap, anyway.”

“She was on the cover of British Vogue as well.”

“But they had the good sense not to show her knockers.  British women have such huge mammaries, c’est dégoûtant.  They should offer reductions on the National Health.”

My coaster started vibrating, warning me that my order was ready.  “That looks so early Spielberg,” Karl commented as the lights spun around the plastic disk and it shuddered.  He pronounced Spielberg with a slight German “shh” at the beginning, which made sense seeing as Karl is German, not French as everyone assumes for some reason.  “Why on earth do you have to eat in a restaurant where they don’t serve you?”

“I suppose you still tipped them, even if you have to fetch the tray yourself.  Stupid American.  You feel that just because you went through the indignity of waiting tables yourself once that you have to bow and scrape to those paid to serve you for the rest of your life.”

Neither his mood nor expression had changed by the time I returned.  “I suppose I should have ordered you something,” I said.

“Don’t be silly.  Even if I weren’t a figment of your imagination, I didn’t lose almost ninety pounds because I still eat that crap.  What it is, anyway?”

“Smoked chicken breast wrapped in prosciutto on toasted focaccia,” I replied, making sure to pronounce ‘focaccia’ with the full force of a proper Italian accent, knowing that no German could do the same.  I was losing my footing here; every piece of one-upmanship counted.

“A drenched in olive oil, I see,” he said.  “And is that fromage I see tucked in there?  You clearly haven’t read my diet book.”

“No, but I’ve read about it.  Fish soufflé, quail flambé, ham and raspberry mousse… You’d need a professional chef to follow it.”

“Makes you unhealthy.  I exercise, a lot, so if you’ll forgive me I’ll indulge myself with this sandwich.”

“You’ve got a potato chip stuck to your sleeve.  You had a bag quickly while you were in there fetching your own sandwich and still tipping the staff.”

I flicked away the chip and bit into the sandwich, determined to find a way to change the subject.  There is nothing worse than discussing diets with a former fat person; it’s like listening Tom Cruise crap on about Scientology just after his conversion in ’86.

“We’ve met before, you know,” I said after swallowing the first bite.  Service or no service, the sandwich was delicious.  I detected a faint trickle of saliva on Karl’s lips as he watched me eat.

“I was working as assistant to Pamela Hanson.  We were doing a shoot about Chanel for Marie Claire or Elle or something.  Wallis Franken pretended she was Coco, we shot in her old apartment above the boutique.”

“Poor Wallis, God rest her soul.  Always so cheerful, then one day…” he made a whistling sound like a missile being launched and used his gloved hand to imitate Wallis jumping to her death from her husband Claude Montana’s apartment.

“Yeah.  She and I were kinda close at one point.  Sad.  Then we photographed you in the Chanel boutique on the old mirrored staircase.  You’d just taken over as chief designer.  You were shy and nervous, very self-deprecating.”

“I rather liked you, in fact.”

“I wasn’t shy.  It was that dreadful teal cable-knit cardigan you were wearing, big baggy thing.  And you smelled.  There I was stuck in a pose on that fucking staircase with a tall smelly American teenager hovering over me trying to take a light reading off my face.  I wasn’t shy.  It was all I could not to gag.”

“Oh, so you remember?  I hoped you would.” Karl cocked an eyebrow over his sunglasses to remind me that my memories and imagination were coming form the same place.  I felt like a fool.  “That was a very practical sweater.  Deep pockets.  I kept exposed film in the left, and stripped rolls ready to be loaded in the cameras in the right.  I could fit fifteen in each.  It was from Browns.”

“So what?  It was ghastly.  You should have your gay card taken away for that transgression alone.”

“I was… ahead of my time.  Hipsters would kill for that cardigan nowadays.”

“Oooph!  Please!  Hipsters, indeed!  That is one movement I cannot wait to see the backend of.  There is nothing fashionable about irony and being willfully ugly.”

I couldn’t agree with him more, but if I agreed with him, that meant I’d have to disavow the cardigan, too.  “So, um,” I said, eager to turn the conversation to something more substantive.  “What do you think about the second Greek bailout?”

“What about it?  They can’t even afford duty free any more.  They’re les nouveaux pauvres.  Gone are the riches and the glamour and the sparkle of the golden Greeks like Onassis and Niarchos and the rest.  If you can’t afford to shop, then what use are you to me?  It’s like what’s the point of living in Los Angeles if you never wear anything?  I tell you what, though, I have spent my entire life being a sale Allemand.  I was barely a child during the war!  I fought and fought my way against French prejudice.  ‘No German has good taste!’ they said.  But I rose to become one of the great couturiers of all time.”

This was the first time I had seen Karl break his composure.  He seemed to grow, the high collar of his shirt was bursting under the tension from his neck.  “I know what they said about me,” he went on.  “I read what they said about me, season after season.  So, yes, I was a little shy when you took that light reading on the staircase at Chanel.  Yes, I was fucking nervous.  Who wouldn’t be?  It was the House of Chanel!  And it was mine!”

He stamped his foot on the ground, the heel of his boot making a faint but distinct goosestep of a Prussian click.  “And so it is with all of Europe for Germany.  A clutch of dowdy old crumbling maisons waiting to be saved.  By us.  We endured the scorn, but no longer.  My country carries the world on its mighty shoulders, and I tell ZEM HOW TO DRESS!”

As Karl slammed his leather gloved hand down on the table, the last of his refined French pretentions fell away, revealing the hard-edged, put-upon ambitious German.  This was like a scene out of Dr. Strangelove: deeply embarrassing for him, not chic at all, not the rock-n-roll octogenarian he has made himself since shedding the blubber.  “May I go now?” he asked, retreating the folds of his neck back under the high starched collar.

“If you must.”  I felt badly for the old duffer; there is something very endearing about him.

“May I take that tray for you, sir?” said a perky waitress at my elbow, distracting my attention from Karl for a moment.

“What is that lovely cologne you’re wearing?” the waitress asked.  I almost blurted that I never wear cologne, not even scented deodorant, but then I realized there was a strong lingering perfume in the air.

“I believe it’s Lagerfeld for Men,” I replied.