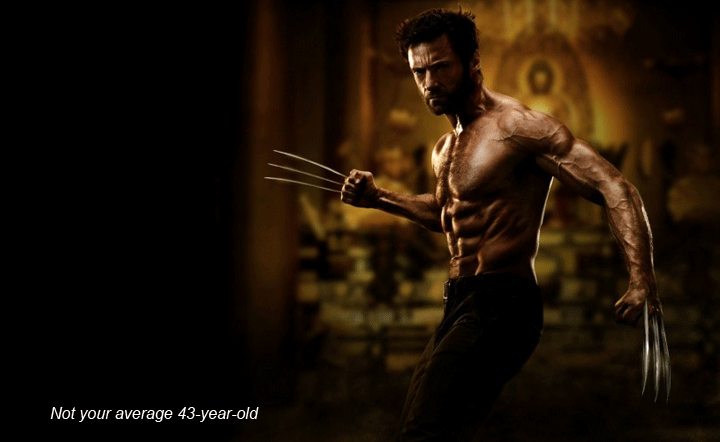 The first image from the upcoming Wolverine starring Hugh Jackman was released yesterday.  This film had a few production problems when Darren Aronofsky dropped out and the earthquake struck the Fukushima nuclear reactors near where they were planning to shoot, which was kind of meta when you think about it: this is an X-Men character after all.  Still, I doubt it was radiation that turned Jackman into the super-shredded, spray-tanned, heavily vascular creature he is in that picture.

I thought I might ask a steroid user friend of mine, who also thinks he’s Wolverine from time to time, what he thought.  He shall remain anonymous because these things aren’t allowed in this blessed Land of the Free unless you’re dying of cancer, in which case they’re not only legal, they’re good for you.

Me:  Tell me a little about your steroid use history.

Anonymous Steroid User:  I’ve done three big cycles over the past four years.  I’m off now, I don’t think I’m going back on again.  It’s just so much goddamn work, all of the eating and stuff.  The last time I was on it I blew up like a friggin’ stud bull, I was 280 lbs., didn’t fit into anything.  I just don’t want to be a pneumatic muscle queen.

Me:  So what is your opinion of this picture of Hugh Jackman for the upcoming Wolverine?

ASU:  Boy is he ripped.  Woo-hoo!  But this is heavily airbrushed, too.

ASU: Testosterone base with a Winstrol stack.

Me:  Is he injecting this?

ASU:  The Winstrol is a pill.  The testosterone is two injections of about a half a gram a week.  You alternate glutes and quads, so he gets a little break from the pain.  He does his right thigh one day, then the left, then his right butt cheek, then the left, so that it alternately hurts walking and sitting.

Me:  And how long has he done this for the film?

ASU:  I would say that’s a good four to six months.

Me:  And what does the vascularity come from?

ASU:  From the Winstrol.  It’s what they call a “dry gainer.”  Favored by runners and athletes like that.  Doesn’t make you look all bloated and pneumatic.  Really shreds you down, doesn’t add a lot of water weight.  And he’s probably taking enough diuretics to dry out a fuckin’ elephant.  Like, “Whoa! I just peed for ten minutes straight!  And at the end it came out red a little bit, but that’s okay.”

Me:  You’re also a Wolverine fan.  You’ve dressed up as him for Halloween.

ASU:  Yeah, and I looked great.  I wasn’t a fan of the last movie, though.  It was just a lot of snarling and chopping.  And the helicopter scene was retarded.

In terms of the ethics of doing steroids for these films, fuck it, if you’re going to do these things, might as well do them.  Remember Gerard Butler in 300?  That’s the net result of a lot of testosterone and probably Anadrol.  And then he deflated afterwards and became really fat.

When you come off steroids, it’s like popping a balloon, but it’s also this extended comedown, you know, like after a weekend of heavy drugs you have one or two days when you’re feeling shitty and weepy.  But this goes on for months and months.

Me:  So that’s why Gerard Butler is always depressed?

ASU:  Well, that and the closet homosexuality.  When he came off, he probably had extended crying sessions with his therapist about mom and dad. Sparta, where the men are men, and the women’s chests are smaller.

Me:  Sorry, is this Jackman or Butler?

ASU:  Both, probably.  Is there a difference?  Jackman probably had to go to a good Broadway show, like Next To Normal, had a good girl cry and released a lot of what was making him feel bad.  Then did a lot of cardio.

Me:  The director of this Wolverine is actually pretty good, James Mangold.  Have you seen his work before?  He did 3:10 to Yuma.

ASU:  Meh, that was all right.

Me:  And Walk the Line, the Johnny Cash story with Joaquin Phoenix.

Me:  What about Knight and Day with Tom Cruise?

Me:  So this new Wolverine is shot in Japan, which you’re gonna like because you’re into Asians.  Lemme read you the log line:  “Wolverine travels to Japan to train with a samurai warrior.”

ASU:  Aaaaawwww, boy.  Here’s what it probably is: He goes to Japan, gets his ass kicked by some samurais, has a big learning curve, grows his claws back, becomes even more shredded on the Winstrol, kicks some ass and gets respect and he’s given bushido status.

Me:  Frank Miller is one of the credited writers, the guy from Sin City.

ASU:  Oh, in that case it’ll be really camp, but not in the way the Brits use camp, meaning faggy.  But in the proper camp way, as in over the top, comic book like.  It might be good.  I’m kinda looking forward to it now.

Me:  Anything else you want to add about steroid use in Hollywood?

ASU:  Now that I think about it, I should really come out there and become a quote unquote Hollywood trainer.  It’s really easy because all you are is a steroid provider and injector.

Me:  I dunno, there’s some fierce competition out there.