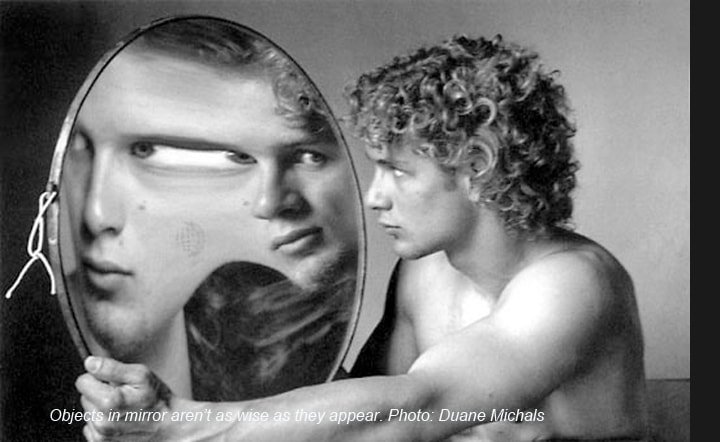 I’m going to call you that because it was your name as a child before the headmaster in high school changed it to James.  I know, I’m writing this to you as you were up until your mid-thirties or so, and the name was changed when you were a teen, but you get the symbolism.  C’mon, don’t raise your eyes like that!  That’s something we definitely need to talk about: patience.  One of your favorite quotations, “Impatience is a virtue of youth,” is absolute rubbish.

I’d wanted to write this letter a week ago, before I coincidentally stumbled on a site called DearYoungMe.com, which is a sort of Tumblr thing where people post Twitter-length messages to their younger selves that mostly read as trite platitudes.  Even though many of the messages are sweet and well intentioned, even I’m raising my eyes at most of them.  The really bitter ones are worth a giggle. The idea came about because I imagine that it’s a normal process of middle age to ponder your youth, how you might have done something differently.  Many people my age or older on Facebook tend to put up pictures of themselves when they were younger, and that’s sort of sad; you probably don’t find it hard to believe that I have kept no pictures, no memories of any kind.  But I think none of us older folk would go back and repeat those years without knowing what we know now.  In the end, given the choice, wisdom is more valuable than youth.

But the fantasy of going back and being you all over again knowing what I know now is palpable, Jamie, even though if we met now and I tried to give you my advice with the hindsight of experience, being the obdurate nutjob that you have always been you would probably ignore me, scoff at me in that arrogant, dismissive way.  You wouldn’t believe that I am your older self, to begin with.  I am not who you imagine you will be, if you ever think that far ahead.  And that’s my first piece of advice:

Don’t just daydream and imagine.  You can make all the plans in the world, set all the goals you want, but you will learn that the maxim, “If you want to make God laugh, tell him your plans,” is painfully true.  Although some plans will work out, just not the way you think they will.

What I mean is you should develop a strategy, and a few fallback strategies, to accomplish what you want to achieve. Don’t just “surf existence,” as you like to say, all the time—although surfing existence is an astute approach to the natural chaos of life. If there is a certain way that things are done traditionally, then do it, don’t always seek the alternate route because everyone else it taking the path well trodden and it’s crowded and boring.  For instance, if you are serious about becoming a director, and I know you are, then take that “surf” metaphor even further and understand that a director is the captain of a ship, often a very expensive one.  You don’t just become captain because you have a vision of how and where you’d like to sail.  You get to the bridge by experience and working your way up the hard way, somehow.  Whether you like it or not, no matter which alternate route you try to take, this training obstacle course will always be there in some form, until you get the experience that makes you a worthy old salt, whom people will trust not to sink the ship.

Which leads me to my second point:

2. If it relates to your chosen career, do it.  Often.

If you want to be a baker, then bake, constantly, until you’re the best.  Get those ten thousand hours that Malcolm Gladwell says are necessary for proficiency at something under your belt, no matter what you have to do.

In other words, direct.  Anything.  Often.  Do not turn down the offer from that record label to direct music videos when you were in film school, after only your sixth week there.  Music videos will not be a passing fad, and they will lead your peers to direct in that other medium you turn your nose up at just because your father was a Mad Man: commercials.  Do as many of those as you can, too.

This is part of planning ahead.  Music videos might not make you rich, but commercials will, particularly in the years before the Internet redefines advertising.  And having the money to live comfortably will allow you to work on projects that you really want to make, and will make you attractive to the studios.  Yes, you should work with the studios, stop turning your nose up at them, too.  If you are truly as good as you think you are, then they will let you do what you want within certain reasonable parameters. “Return of the Prodigal Son” by Duane Michals

As a writer, when they ask you to do rewrites until you feel that your fingers, eyes and mind are bleeding, get ready to do more.  As your producer Lisa Katselas will tell you years later, “That’s what it takes.”  You have no idea how many corners you cut right now.  Yes, you’re better than most, but you could be so much better than even that.  Never rest on your laurels, for that is truly for losers.

Do not be too proud to do shit work on a film set.  You don’t have to be above-the-line talent, along with the producers, other writers, the director and main cast.  Having said that, the decision to hone your skills as a writer is the best one you will ever make.  I’m just saying it will stand you in good stead to eat a little humble pie every now and then, that’s all.  And it’s not sure you will have ever had to do shit set work as a schlepper, anyway, if you would just

I’m not sure about whether you should have stayed at Wesleyan beyond your freshman year.  The jury’s still out on that and unlikely to return.  Other than the contacts you would have made there, which would prove to extremely valuable in Hollywood, it wasn’t broad enough or sophisticated enough to handle you.  So when that publicist says, after you tell her where you went to school, “Is going to Wesleyan a prerequisite to making it in Hollywood?” do exactly what you did: laugh it off.

But NYU Film School?  You will be top of your class.  You could have all the practice directing that you needed, and build those futrure contacts in the business, because the true doers, the guys in the trenches making the films, which is what you want to be around, go there.  So the right school is very important because it will help you stick it out.  And NYU is right for you, even though it might feel overwhelming in the beginning.

And don’t feel badly you don’t get that fellowship you applied for!  So what?  You shouldn’t drop out because of one silly rejection, because only a few members of the faculty were doing cartwheels about you, not the whole staff!  What a wuss.  What a spoiled brat.  And that’s a side note: you really need to get an accurate picture of just how spoiled you are. However.  If you do not drop out of NYU, you will never have that moment twenty years later when you are standing in a theater at the University after having given a talk on your film.  You won’t ever get to say, “Any more questions?  No?  Good, well, I just wanted to say that when I dropped out of this school many years ago, I had a terrible fight with my Dad.  I said to him, ‘I will not spend another dime of your money to go to that place, but one day I will lecture there.’  Thank you very much for having me.”

If you stay at NYU, you will never hear that applause, you will never feel so vindicated in your whole life.  So it’s up to you.  I’m not saying that if you follow the beaten path you won’t still be struggling with something or other at my current age; life will fuck you one way to the other, constantly, over and over.  I guess it boils down to the ways in which you want to be fucked, and how comfortable you want to be when it happens.

I know, Jamie, it seems like that’s exactly what I’m doing right now as your older self.  Or that’s how I know you’re taking this.  You’re so sensitive that you’re misinterpreting wistful concern as criticism.  And that’s one of my biggest notes to you: stop it with the sensitivity.  As your future ex Jonathan Kemp will tell you years later, “It’s your Achilles Heel.”  Toughen up, which doesn’t mean you should let assholes get away with treating you badly.  Ever.  Maybe you should learn how to box in your early twenties instead of late thirties.  That is going to be a life-changer.

Above all, allow yourself to fail.  A lot.  It might sound like a trite platitude from DearYoungMe.com, but embrace those failures because they will be far more educational and valuable than the successes.  You’re a perfectionist—a symptom of narcissism, but I’m not beating you up about that just yet—so even the slightest typo in a published article is excruciating.  But does it have to be so debilitating that you can’t get out of bed?  That you set off on weeklong benders?  Oh, come on.  Man the fuck up.

Look at it the way I do now: failures are necessary pre-successes.  Make sure you listen to that queen you will scoff at when he reads your palm on the set of the first feature film you will write, at the age of twenty-four: no matter what your career trajectory seems then, you will only enjoy success much later in life.  So, you’re a late bloomer, big deal.  Just roll with the pre-successes no matter how painful, especially the romantic ones, because they will inform your work and make it better.

Well, I’d wanted to wrap this up in one post, but I still have so much more advice for you, kiddo.  I’ll have to write you again soon.

Much love, and I do love you much more now than you ever have (we’ll talk about that next time),