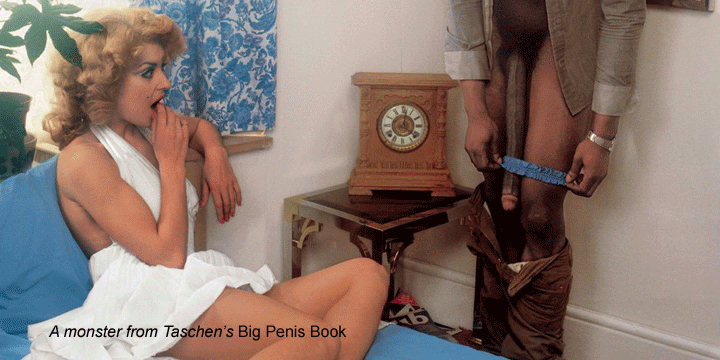 The reason this comes up is Dame Bea invited Tuttle and me to a party last night in honor of the launch of the 3D version of Taschen’s Big Penis Book, which was coincidentally mentioned in Baker’s wunderpost earlier this week. The party was at their store in Beverly Hills, and a good time was had by all, despite the fact I care even less for big dicks than I do for Facebook.

I am an unabashed, screaming fan of German art book publisher Taschen.  I don’t just love it, I aspire to be it: big, bold, sleek, tasteful, smart, glossy, beautiful, expensive, impressive.  Yes, I need all of those adjectives re-encoded in my DNA.

According to the lucky bastards who work for Taschen, Facebook doesn’t feel the same way I do.  When they posted the invitation to last night’s event, the Taschen Facebook page as well as the personal pages of its administrators were blocked for a weekend, which is a fate that might await me as well for the heresy I am currently writing, but clearly I don’t give a tinker’s damn; whichever of my friends reads this blog already reads it, the rest tune me out. “Got something for ya, Mark.” Another massive schlong from the book. Ugh.

Interestingly, when Taschen hosted a similar party a while back to promote the 3D version of The Big Book of Breasts, there was not a peep from Facebook.  I deduce that, like me, Mark Zuckerberg feels threatened by large cocks.  Mind you, the cover of the book features a covered cock, and that was the image used on the invitation as well as the Facebook page, so maybe Zuckerberg’s phobia is more acute than mine.  I’m sure it’s the last thing on his mind right now, anyway, seeing as he’s just been caught red-handed trying to fist Google up the ass with smarmy press.

I am not sure why I’m one of the few gheys in the world who doesn’t like big dicks.  It probably has something to do with the fact I’m not super hung myself.  I am extremely competitive, but only if the competition is rigged my way.  If there’s no chance of winning, then I’m not interested.  The other more major factor is, being a total top, I have no idea what to do with a big dick in bed.  I suppose it is rather nice to watch bouncing up and down.  So, properly speaking, I’m not really threatened so much as I am just indifferent to big dicks.

The weirdest thing last night at the Big Penis event was that my name was on the press section list, which isn’t strange per se because I’ve been through the press section at events innumerable times in my life, but this time I was listed as “blogger.”  That felt odd.  I mean, clearly that’s what I am now three months into this, and that’s what I’m doing with this story, but for some reason, and maybe it was due to the four rums I’d had at Dame Bea’s an hour earlier, I sort of felt like it really said “plumber.”  You know how words can have a feeling as well as a meaning?  Well, suddenly I felt like a large hairy bruiser from Queens with his ass crack showing and a plunger in his hand.  (No offense, John Wood; everyone knows you’re from Boston.)

I decided today that from now on I am going to have them put “Ernest Scribbler” on guests lists instead of blogger to avoid any emotional trauma.  I agree with Anna Wintour’s distaste for the word “blog,” and it’s all the more unfortunate because we are going to be stuck with it ad infinitum.

It took a while to get up to the bar on the roof of the Taschen store given the crush of people, who were more interested in reaching the vodka than ogling the hobbit strippers dancing on the display cases downstairs.  Or they were keen to get to the vodka so they could be drunk enough to fondle the hobbit strippers later. It seems that most male strippers are rather short.  If I added another five feet to my height by getting up there and jiggling my junk, it would be scary as fuck, aside from the fact that having a six-foot-three middle-aged modern misanthrope go-go dancing is in general inadvisable; if anyone actually touched me, I’d kick him or her in the face just as a reflex.

Taschen obviously isn’t indifferent to big dicks, but that’s because The Big Penis Book and The Big Book of Breasts are some of the company’s hottest sellers.  Smut trumps art, I guess.  However, contrary to urban legend, I have been assured that neither book is the bread and butter of the company.  Those would be the limited editions I can never seem to afford, which are so stunning I feel like I should wear gloves flicking through them.

Personally, I would rather have Taschen’s Helmut Newton book than the Big Penis Book.  I did see a stack of copies of it in the toilets, by which point I was drunk enough to try to steal one, but cleverly there was a security guard there making sure I didn’t leave the back of the store with a twenty-pound tome tucked down the front of my pants.

So when I finally got to the roof, who should be there but one of my favorite movie stars of all time, Gurdeep “Deep” Roy, the guy who plays all the Oompa Loompas in Tim Burton’s Charlie and the Chocolate Factory.  He was surrounded by big-breasted babes, God bless him.  Very nice guy.  Apparently he’s a Sikh, which would make sense from his first name.  When he said, “I’m a Sikh,” he did this twirl thing around his head with his hand like he was making a turban out of air, and I knew I was a fan for a reason. Yes, it’s really him and I shook his hand. See? I wasn’t exaggerating about the big breasts.

Gurdeep is actually not from India, but Kenya, which reminds me of far less amusing news.  It would appear that the rogue state of Uganda is slipping further into the heart of darkness by passing a bill in parliament making homosexuality a crime.  Apparently this version of the bill doesn’t make it punishable by death the way an earlier version did.  In case anyone is catching up with the horror show going down in Kampala, Ugandan gay rights activist David Kato was beaten to death with a hammer in January.  Beating us to death is, of course, the preferred, time-honored way to murder us, although in Iran they seem to prefer hanging, which Uganda was going to make the official way of execution once it had institutionalized the right to kill homosexuals.

There is no way to boycott Uganda or Ugandan products; I’m not sure they make anything, do they, other than blood diamonds?  You shouldn’t be buying those, anyway.  But apparently they are being inspired and goaded forward by the American evangelical movement, which has seized the country with a fury in recent decades, presumably because they don’t have anything better to do because they aren’t making anything.  So I guess the only action we can take is to boycott companies and products that are either owned by or support American evangelical groups.

At the end of the day, it’s pretty clear religion equals terrorism.  So why don’t we just boycott God?