According to my personal lexicon, a spineless dick is what I call a good friend who won’t go into overdraft to loan me more money.  According to the Guardian, the scientific community is all a-flutter over the discovery that we men have shed the DNA responsible for allowing us to have spines in our penises like other mammals.  The dickhead creationists will probably cite this lack of penile backbone as incontrovertible proof that we were actually created by God, not descended from apes through evolution.  I say to them, Verily, thou shouldst have more faith in science than fruitloops juju mumbo jumbo, for hath not science replaced the penile backbone with Viagra?  Is Pfizer not therefore divine?

Speaking of spineless dicks, I cannot resist reposting this image with a new caption:

I was right about the atrocities, they’re trickling out already: apparently Mama Gaddafi has swept out the dungeon and has been sharpening her knives and waxing the rack.  Some BBC journalists she had a stab at are reporting widespread torture by Mama’s minions.  Where does evil like that come from, do you suppose?  I’ve been watching Lady Gaga’s new video over and over for the answers, but her creation myth is just as bat-shit loony as anyone else’s.

My personal archangel Yvonne Michael had me watch this year’s Academy Award-winning documentary The Inside Job, which was indeed so opprobrious it left me numb with indignation, although frankly as a child of New York I have long been calloused to these outrageous, coke-fueled financial shenanigans.  What made me a bit nauseous with panic is the notion that the perpetrators of these heinous crimes against humanity are still in charge of the financial world and are still refusing to regulate.  And of course Our Fearful Leader just stands around and lets change pass him by and only occur in North Africa.  Because they need it, we don’t.

Will somebody kick start our revolution, please?  Hello?  Anybody?

The person who comes off best in the doc is Eliot Spitzer.  I agree with Yvonne: next on my list is Client 9: The Rise and Fall of Eliot Spitzer, the documentary about how they fucked him over with the prostitution scandal.  It’s all about Eliot.  He smart, sexy and just louche enough to be a real man in my books.

I didn’t agree with The Inside Job’s moralizing stand about financial institutions writing off hookers as client entertainment expenses.  I’ve already expounded a bit about hookers in a previous post, but the fact is they are entertainment.  I don’t see the difference between a $1,000 sushi dinner at Nobu and a $1,000-an-hour blowjob from a hooker with 38F-sized knockers (value for money right there; Nobu is a gyp in comparison).  When narrator Matt Damon mentioned how the dirty devils of Wall Street were using prostitutes “on an industrial level,” I muttered, “Right on.”  Listen, the girls are being well paid, they are safe and well-cared for.  It is a valuable service.  Lighten up and get a little Dutch with it, already.

My latest hero, Eliot Spitzer. If he shaved off the hair, tattooed his arms and put double zero plugs in his ears, he might even be the straight me.

Speaking of louche, potentially award-winning documentarians, my buddy Jay Bulger gave me a sneak preview of his upcoming film about nutjob genius drummer Ginger Baker.  I know Yvonne, for one, will love it.  Personally, I like watching characters like Ginger from a very long distance; they’re too much of a pain in the ass in real life, and I’ve known way too many of them for the peace of my acid reflux.  I admire Jay for stepping into the lion’s den and coming away with what looks like some powerful stuff about a creative tempest from an art form that is seldom documented: drumming.  A major part of a great documentary is finding the right subject that turns a spotlight on a different angle on the human experience, and it seems Jay has done it.  Well done.

Model-turned-director Jay Bulger. Something of a creative force himself, it turns out.

Speaking of creative tempests — I know, I keep saying “speaking of,” cos this is one of them there stream-of-conscience blogs — Julie Taymor was axed from Spider-Man, the Most Messed-Up Production of the Year, the making-of story for which is more interesting than the show itself, never a good sign.  It looks like Taymor’s legendary crazy ego finally got the better of her and she’s been removed, which is both scandalous and sort of heartbreaking: she spent nine years working on the project.  But apparently she’s a nightmare.  I once heard an actor friend of mine who has worked with her say that if he ever did another Taymor film, he would want “specific clauses” in his contract limiting whatever hell she could put him through.  It sounded like he wanted to work with her, but wanted a restraining order at the same time.  This comes as no surprise, what with the performers in Spider-man injuring themselves while she “searches for a new form of theater,” which might just be the Snuff Musical. 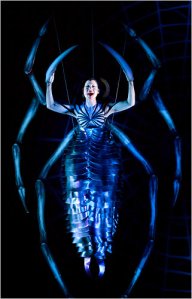 Apparently this actress got caught in Julie Taymor's web, fell from it splat on the stage and is now collecting some serious worker's comp.

The other Taymor story of mine is, once upon a time a few years ago in development hell, my producers on an India-base project of mine thought it might be a good idea if we made her an offer to direct the piece.  I got as far as her rep, who said to me, “You really don’t want to pursue this.  She’s impossible.”  Lady, if your own people say that about you, maybe cognitive behavioral therapy is in order, you know, what they put autistic children through to teach them how to deal with the real world.

Given that Taymor’s films have never made money, at this point I’m almost willing to give credence to the vicious industry goz that she wasn’t entirely responsible for The Lion King, either, that she was removed from that before opening, too.  I dunno.  If I were a musical theater fagelah I’d know shit like that, but I kinda hate most musicals.

Lastly, it isn’t me having the lasties about my soon-to-be-former landlady Susan Blais, but my virtual friend Old Ancestor.  I am pleased I have provided him with a worthy muse, and apologize for retiring her as a character, but it’s my way of smudging her negative juju with the smoldering sage of my beatific intentions.