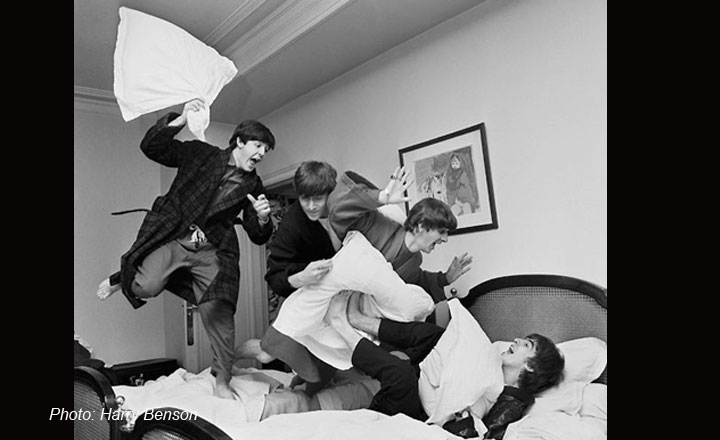 Am I shamelessly brown-nosing our one and only advertiser (so far), Taschen Books, by kicking off the week in review with an item about the launch on Wednesday evening of their book Harry Benson. The Beatles?  Hell, yeah.  What, we’re supposed to kiss up to Groupon like other sites?  Um, no.  This is PFC.  We loved Taschen before they even knew we existed, so we’re thrilled for any attention they give us.

While Tuttle, Dame Bea and I waited for local radio station KCRW to muddle through technical difficulties before their interview with Mr. Benson, I looked around the store and said to Tuttle, “Taschen really are a good match for us.  It’s what we’re about visually and philosophically.  Look at how they mingle tits and ass with intellectual fine art, and are so big and bold about it.”  And in that moment my gaze landed on one of the blown-up Albert Oehlen collages that decorate the store’s walls, an image of a leering Tom of Finland fetish cop groping the ass of a boy from what looks like an early Pablo Picasso painting. The best radio station in the whole wild world—KCRW is the only one I allow to intrude on my precious silence on a regular basis—was unable to resolve the technical issues, meaning Benson had to do the whole thing without a mic.  He’s now elderly, his eyes so rheumy he has to wipe them every so often, so the lack of a microphone meant he had to shout his answers as loud as he could, and that wasn’t very loud.  I’m never good at guessing people’s ages, but I figure he must have been in his early to mid-thirties when he went on tour and photographed The Beatles in 1963, almost fifty years ago, when they were just breaking out.

I wasn’t prepared to be so charmed or to be so caught up in the significance of what Benson witnessed and what he was able to capture on camera.  The Beatles saturated my life from early childhood until early adulthood, when they ducked behind their pots of money and started marrying strange and dangerous creatures.  I am more attracted to obscurity than relentless fame; I’m a terrible fan.

I’d thought that I would go to the Benson event to meet the Taschen guys properly, catch up with Dame Bea and Co. and then head off to something else.  Instead, I found myself hanging on Benson’s every word, and the next thing I knew I was actually taking notes like a proper journalist.

When Benson was asked what his favorite image was, he replied in his soft Glaswegian accent, “The pillow fight.  For me, The Beatles were the greatest composers of the twentieth century.  In the future they might look back on that image as a pillow fight between Mozart and Bach…. I mean, after The Beatles, who can listen to Hall and Oates, know what I mean?”  Half the room Oh, Snapped after that comment, but I chuckled: it’s clear when the last time Benson paid attention to popular music was.  Personally, I might have made a reference to Justin Bieber, what with the Beatles-ish fringe mop hairdo and all, not to mention the clouds of hysterical tweeting tweens following him like exhaust fumes from a Mexican truck.

One thing we had noticed walking into the store was that the book itself wasn’t anywhere to be seen.  After the interview, they hauled it out.  It was one of them there Texas-sized XXL Taschen books that will also protect you from a nuclear attack, which need to be hoisted with a forklift.

As he signed away and posed with fans and buyers for photographs, you could tell old Benson was thrilled.  It was his turn now, just as it was the Fab Four’s way back when. What a way to have your work honored with such a big, gorgeous tome. I don’t know which classical composer to compare Axl Rose with; I’m just not that well versed in esoteric musicians who might have enjoyed a few brief, heated years playing the European royal court circuit before succumbing to extremely premature dementia.  Now Axl has been turned into Stacee Jaxx, the character Tom Cruise plays in Rock of Ages, which is out this weekend.  I won’t be seeing it, although our contributor Eric Baker, who used to play in a hair band, might surprise us and review it.  I am skeptical of that, too.

According to suspicious news outlets, Cruise is the only decent thing about the movie, which from the trailer looks like one of these Dirty Dancing/Step Up sort of things, but is actually far worse: it’s based on one of those Broadway/West End warblers like Mamma Mia, the sort of thing grandparents take the grand kids to see for a little inter-generational bonding.

Swimming against the putative Cruise Renaissance tide, which is no doubt fueled by not a few Scientologist publicists, Movieline critic Stephanie Zacharek had some cogent things to say about his acting in general.  I agree with her just based on what I’ve been forced to see of the trailer when it was playing in front of movies I actually paid for (yes, I’m the guy who hissed in the audience after the RoA trailer played):

Of course there’s nothing sexy about Cruise.  He’s almost fifty.  For a gay man (or any man) to be sexy at that age, he has to be a daddy, sort of like the Scott Rudin character Cruise played in Tropic Thunder. In mid-middle age, Cruise looks like an aging elf from Lord of the Rings, which is extra unfortunate because they’re immortal and not supposed to age.

Now, if they remade something like A Star is Born with Cruise playing a similar sleazy gay film mogul, I would be fighting to get into a press screening to see it.

At his best and sexiest in ‘Tropic Thunder.’

UPDATE: As suspected, RoA is tanking.  It’s being blamed on Cruise not being believable as a rocker and Russell Brand being more repellant to audiences than he was to Katy Perry in the end.  Brand had the same problem in Britain: they sort of loved him in the beginning, then he managed to creep them out.  He always looked vaguely Addams Family to me, never understood his appeal.  More on this weekends B.O. wrecks at DEADLINE.COM.

One movie I can’t make up my mind about just based on the trailer is Oliver Stone’s forthcoming Savages.  I won’t embed—the trailer is HERE.  It just looks kinda hokey, like it’s a fictional Survivor contest between Caucasian and Latino Hollywood film stars intended as an homage to Quentin Tarantino, but shot and edited in Stone’s usual frantic mash-up of film media. That sort of distracting, distracted filmmaking leaves me deeply suspicious of a director’s ability to pull of the deceptively simple task of telling a narrative straight through and letting the performances breathe properly without smothering everything with parlor tricks.  It’s something Tarantino himself has been guilty of in the past, but which from the look of things he might have grown out of.

Stone is on the cover of The Hollywood Reporter this week with the headline, “I was crazy for many years.”  Well, the Vietnam War did that to ya, especially if you actually volunteered for it, which was a pretty crazy stunt to begin with for someone from his background in that revolutionary era.  Lest anyone be deceived by his demeanor to think that Stone was some working-class kid who had few options but to join the Army, he actually dropped out of Yale to dive into this particularly willful act of self-destruction.  In fact, he’s a bougie Ameropean just like me: his father was a stockbroker and his mother was French.  He even has French citizenship, which is why his singular piece of shit Alexander the Great qualified to be a product of France, not Hollywood, USA.  Ohlala!

I wish I could embed the latest promotional vids for Savages, ‘The Interrogations,’ but we are still in New PFC Site Beta mode, and we don’t have the capacity to embed videos that aren’t from YouTube yet.  So here’s a LINK and a screen grab of Benicio Del Toro in a cool-as-shit mask, which is literally hiding and impeding his performance: I love the idea that you can just go into production without a script finished, like they did with Men In Black 3.  The ways of the studios never cease to amaze me; I personally could never do that, much less when the film costs upwards of one hundred fifty million dollars.  As a seat-of-my-pants indie filmmaker, when I hear shit like that I feel like some Greek peasant farmer toiling away on the plains who looks up at Mount Olympus and marvels at the capriciousness of the gods and their relentless hubris. Tarantino has already released a teaser poster and teaser footage for Django Unchained, and it’s only months away from being released, and they’re still shooting and only just added Jonah Hill to the cast, according to Deadline.com.

See, now that’s chutzpah, not hubris or folly.  I am full of admiration that Tarantino is getting meta with it and making the actual production as gun-slinging badass as the story he’s shooting.  The MIB 3 stunt was just boilerplate Greek tragedy: the Olympians are setting themselves up for failure, so it happens.  By comparison, the production of Django seems to be Gladiator.

Must be summer settling in, but the world has been remarkably well behaved this past few days.  No cannibals, no Greek Nazis smacking hefty communist chicks.  So we have no Schizo of the Week, either.

But I will leave you with Eccentric Bored Golden Retriever Lover of the Week, someone who built this remarkable contraption for his “pooch,” which is not a word that comes to mind in reference to any dog in the Retriever breed class.  That’s rather like calling me a twink.  And this guy wonders why he keeps getting pulled over by cops for pictures.  In case you are saying, “Oh, no, what’s next from James? Cute cat vids on PFC?” this is actually newsworthy because as I write it is trending number one on Reddit.com: