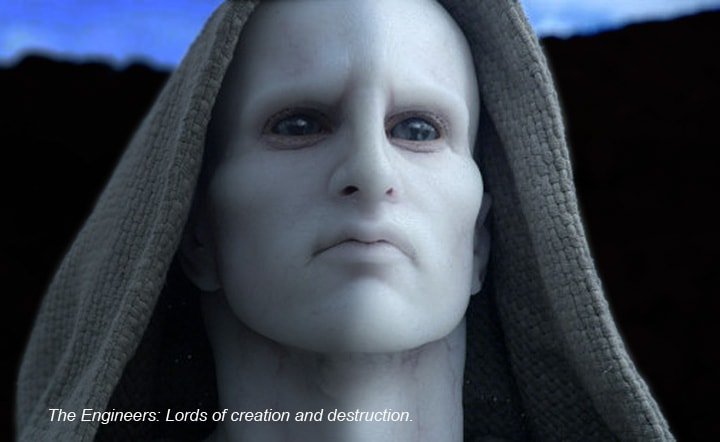 This isn’t a belated review of Prometheus.  There may be a few spoilers in this post, but I’m not sure yet because I haven’t gotten that far into writing it to know.  So: potential spoiler alert!

This is the sort of film for which I should have schmoozed my way into a press screening, and I did try to get a colleague in London who works for Ridley Scott to get me into one, but we all got swept into the whirlwind of our various busy-nesses and nothing came of it.  You would think I would at least have been at a midnight opening, so eager should I have been to bring you, my dear reader, my judgment on this important event; for, whatever the mixed reviews, Prometheus is a very important event for film lovers.

Truth be known, I was tracking early reports and they were beginning to remind me of a first date with someone I’ve met online and been chatting to for months, and this sinking feeling rises that the actual meeting in person is not going to live up at all to expectations.  And you sort of want that virtual love affair that you have been fermenting all this time to continue for just a little longer, until the disappointment of reality crushes whatever hopes of romance there might have been.  For some of us, imagined love is so much more powerful. Hot stuff: an Engineer from ‘Prometheus.’

The pressure from friends and readers was getting too much, however.  I got one email from a reader entitled “Why haven’t you seen Prometheus yet?”  Another was quite passionate in his impatience for my verdict, and even added to the ongoing discussion here at PFC about my impressionistic film rating system (details are at the end of this post):

And yet we never reviewed this important film, which at the very least deserved an item in a weekly roundup, if not a full video review with either Chris Cramer or Tyler Kimball.  So I decided to face the music last night and book the equivalent of my favorite seat—C-22 in the handicapped section of Arclight Hollywood—which in the case of their legendary Cinerama Dome happens to be D-23.

Prometheus is stunning, beautifully crafted.  I scoured every inch of the screen as I was watching it for flaws and found none except in the performances, the casting and some of the dialogue, which was sometimes like the sound of grinding gears.  But the reader who made the ratings comment above, as well as every critic with eyesight and hearing, is right: the first third or so of Prometheus is a Wow, then it slowly degenerates into a Meh.5.  That in large part might have to do with the fact this is the prequel not so much to Alien, but to another film that hasn’t been made yet, Prometheus 2.  In other words, this is a first act.

But if you didn’t know that, if you were duped into thinking you were going to a fully contained prequel to a film that raped your mind with fear when you were a kid, then you are not just going to be disappointed, you’re likely to be furious with director Ridley Scott. Fassbender can read the phone book. As an android.

Without having read much about the production and the filmmakers’ objectives—which I avoided deliberately—I still deduced what was going on and the intent of the film as purposely incomplete, so I wasn’t furious so much as curious.  After the show, I felt like I was coming out for a cigarette and a glass of very expensive wine during intermission of a big Broadway production.  But you don’t get to go back in and watch the rest in fifteen minutes after the warning bell chimes and the ushers summon you back.  You’ve got to wait a couple of years.  At least.

Now that I’ve seen the film and can dive into the interweb and read more without fear of running into slimy, many-razor-toothed spoilers, or even worse the acidic droolings of disappointed geeks, it turns out I am correct: Prometheus is part one of an intended two-part prequel.  So there’s almost no point in reviewing the film officially because nobody has seen that yet; half of it isn’t even in preproduction, although the script is written.

Research reveals that the reason Prometheus disappoints Alien fans, who were expecting something at least as visceral and seminal, is because Scott and his co-writer Damon Lindelof purposely eschewed the notion of making a prequel in favor of a pair of stand-alone films that riff on ideas brought up by Erich von Daniken in his 1968 Chariots of the Gods, a book I remember reading as a kid and being enthralled by.

The gaping question left at the end of Prometheus—and I guess this is where the spoiler alert comes in—is why the Engineers are so hell bent on destroying us that they created the alien creature to wipe us out.  From what I’ve read, it has to do with the one motif that bugged me throughout the film: Why is Ridley injecting all of this religion nonsense into a modern sci fi?  He can’t be serious, is he?  I dismissed it as just part of the gear-grinding dialogue and instead pondered how much fun I might have with one of those studly, steroided Engineers if I slipped him a few Roofies and strapped him into a massive sling.

It appears the religion thing is meant to bug you, because that is likely the reason our creators are trying to destroy us.  And that’s what Prometheus 2 will resolve, which will be part of Dr. Shaw’s character arc.

So, as I said in a message to the aforementioned reader who wanted me to give a low rating to Prometheus, I have to reserve judgment until I see the next half. While I didn’t get the roller coaster ride I was expecting, I am willing to forgive Ridley his trespasses, the same as I did for Lord of the Rings, which I only started to enjoy after The Twin Towers; I found Fellowship of the Ring to be disappointing, but still gave Peter Jackson the benefit of the doubt. David the android holds Earth in his hands.

However, I have yet to forgive Tarantino for Kill Bill 1 & 2, but he’s also the annoying, high-pitched geek in the playground whose slightest infraction will piss me off, whereas Ridley is the strong, quiet cool guy I would be friends with, whose more egregious wrongdoings I will gladly overlook in anticipation of the better things he will do next, and out of respect for what he has created in the past.  I was ready to aim a flame thrower at the screen after KB2, so disappointed was I after the dazzling pyrotechnics of KB1.

The same applies to George Lucas with his ludicrous and lurid Star Wars prequels.  What a crushing disappointment.  But I’ll let Eric Baker’s post from this past Sunday speak to some of the issues with that series better than I can.  I’ll only add my biggest gripe: that by financing the prequels himself and giving Twentieth Century Fox only a small distribution cut, Lucas made billions in profit under-delivering on what could have been a hugely satisfying cinematic mother lode, had he only paid more attention to the basics of plot and character development.  The SW prequels are exactly what Baker turned them into: a joke. Noomi Rapace wouldn’t be my first choice for the Sigourney Weaver role.

Will we be disappointed by Prometheus 2?  I’ll bet not.  My gut reaction as a filmmaker and storyteller is that, watched back to back in the comfort of a living room with a great screen and sound, with time for a cigarette break and a reasonably priced glass of wine in between acts, the Prometheus Saga will be as satisfying as an old-school, four-hour epic like Ben Hur.

The question is, should we allow filmmakers the opportunity to create films in acts like this, with a two- or three-year hiatus in between?  (Prometheus 2 is scheduled for a 2014/2015 release, if they start production this year.) Or should it have just been a four-hour epic like the aforementioned classic, or more appropriately like the film Prometheus alludes to directly, Lawrence of Arabia, which runs two hundred and twenty-eight minutes?

My feeling is the current economics of filmmaking don’t allow for the lengthy epics of yesteryear, so it’s not even to be discussed.  The production schedule on Prometheus was already a very piggy eighty-seven days, and from personal experience working with RSA/Scott Free I know that Ridley doesn’t dick around; he runs one of the tightest ships out there.  Other logistics, namely the budget in the current economy with the shifting tides of how content is delivered, would make it difficult to justify making both films back to back.

So I’m willing to wait and see.  Hopefully this site will still be around in 2015 and I’ll do a follow-up to this post.  And by then, damn it, I’ll get my act together and get myself into an early screening.

*PFC’s film ratings are: Crap, Meh, Nice, Wow, Bravo.  They don’t necessarily correspond to a star system, but are more in keeping with how someone really feels when walking out of a film, i.e., we don’t say “I feel seventy-three out of a hundred/three stars out of five about that.”  We use an adjective or an expletive.