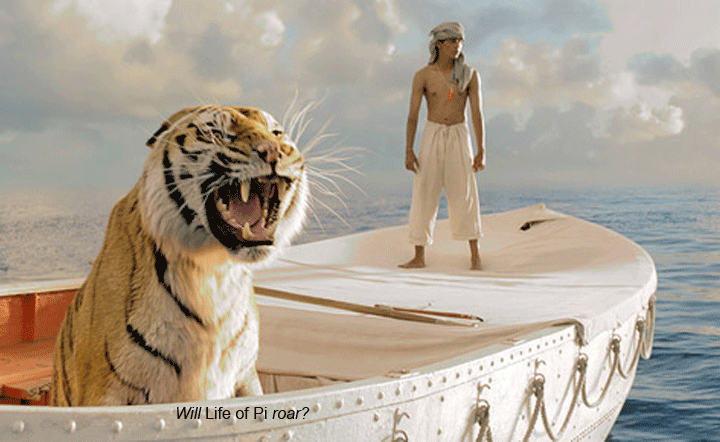 The scene in Homeland got my heart racing, made me say something like “Dang!” at the end, but The Master’s just made me think, “Don’t Hoffman’s pores look great in seventy millimeter?  And we’re definitely going to see an outtake from this run before the Best Actor award is announced”—it didn’t hook me at all.

The challenge is that for the couple of decades leading up to the Recession, awards seasons were dominated by meatier fare made in the 25 to 50-million-dollar range.  Once an average budget for a film, it has now become a rarity, so we’re either left with trying to look at studio crap from a different angle—some “pundits” are actually talking about Avengers and The Hobbit as possible Best Pictures—or choosing funky Euro flicks of dubious merit, like The Artist.

At the end of the summer (the traditional summer, not the Hollywood one—I think it’s going to be seventy-five degrees today), I reviewed some of this fall’s probably contenders based on the fact they were screening in most if not all of the triumvirate of festivals—Telluride, Toronto and Venice—that usually determine which films will be vying for Oscar’s heart.  Let me look at the scorecard thus far, after which I’ll introduce some new contenders.

Only three of the films I anticipated have been released:

THE MASTER:  I gave it a Nice, which is ostensibly our three stars out of five, but our ratings system is meant to convey an emotional rather than a numerical value; I don’t feel that a reaction to any form of entertainment should be reduced to stats.  The reason I wasn’t as giddy about this as, say, my on-again-off-again co-reviewer Christopher Cramer—after reading my review, he texted, “I disagree with you point for point.  I am shocked.”— was I felt the movie should have been told from the master’s perspective, not the disciple’s.  That was its fatal flaw.  And to my earlier point about Homeland, it really wasn’t up to par for an Academy winner, which needs to be superior to an Emmy winner.  (Doesn’t it?  Maybe not any more.)

However, this is the sort of movie over which the Academy and I don’t see eye to eye; it’s still a favorite to be nominated in all categories. My take on Hoffman and Phoenix’s dynamic in The Master.

ARGO:  Again, it was a perspective thing for me.  There wasn’t enough of a personal, subjective viewpoint to anchor me in the story, and the film only gained real momentum when it literally took off during the flight from Tehran sequence, in a color-by-numbers chase scene involving the bad darkies in piddling police cars, and the good white guys lifted as if by an archangel in the form of a Swiss Air jumbo.  However, overall it was solid filmmaking, and Affleck is going to have a Clint Eastwood director’s career making quality movies that he handpicks.  But a Best Picture has to be a Bravo for me, and Argo just isn’t it, in any category.

CLOUD ATLAS:  Even before it was a six-minute trailer, indeed just after it was announced as being in pre-production, this was always my favorite to win Best Picture.  On one level, the end result sorely disappointed with those spiritual platitudes and the injected motif of eternal love looping over time (as if the book needed more layers), on another it exceeded expectations in terms of how the interwoven narratives were so deftly and seamlessly edited, and the incredibly clever use of the same actors in multiple roles to reinforce the injected motif of eternal looping whatsits.

I did a sort of nonsensical eternally loopy somersault of my own at the end of my review:

Ordinarily, I would penalize a superior film one star for making such an egregious choice in deviating from the original text and adding that juvenile metaphysical pabulum…. So I would have given this a Nice after penalty, but my film-person’s opinion is that… minus the claptrap this would have been a masterpiece worthy of a Bravo.

So I gave it a Wow, the best of the three films I picked as possible Oscar contenders this summer.  Make of it what you will.

As to the rest of my early selection, I doubt I’ll see Lincoln any sooner than I saw Warhorse, which is to say never.  Much as I have loved and admired Spielberg’s work in the past, the recent product hasn’t appealed to me.  Regardless, the early hype—and that’s all it is, hype—is that this is a strong all-category contender.

Another film I’m still gunning for is Life of Pi.  I even won a signed poster from Ang Lee (yes, he signed in Chinese) from a contest on Facebook.  I’d love nothing more than for this to win.  Like Cloud Atlas, it was a fantastic book.

I think Anna Karenina looks beautiful and is clearly audacious, but I need to see the whole thing before I can be anything less than ambivalent about its chances.

What else do we have in store?  Deadline posted a piece yesterday with their picks of the pack, broken down by distributor, from which I’ll cull some films that interest me, with their trailers:

Let’s face it, this looks badass.  It’s the true war story of our time, and when handled correctly, as this appears to be in the hands of director Katherine Bigelow and writer/producer Mark Boal, those stories are often the best Oscar material.  Having said that, Bigelow and Boal already won for Hurt Locker, even though ZDT looks like the better, if simply because of the larger scope.  And that’s saying a lot because I really loved Hurt Locker and was pleased when it took home Best Picture.

Plus it stars Jessica Chastain.  She’s just so intriguing.  I can’t put my finger on quite who she is—sometimes I’m not even sure that’s her in a film—and that’s one of the hallmarks of a great actor.

I’m one of the few people who has lived extensive periods of time in both London and New York who has never seen the musical.  Whenever I see the title, I immediately conjure the two yentas on the street—“Have you seen that musical, Less Miserable?”—and chuckle.  I believe it came out around the same time Prozac was unleashed on an anxious world.

I’m just not a musicals guy.  I loved Chicago, for some reason that might have to do with the young hunny I was chasing at the time—one of those I meet now and say to myself, “What was I thinking?”—who loved it so much he saw it a half dozen times in the first weeks of release.  Yes, I can be impressionable when my heart gets in the way of my brain.

Unless the crowds are screaming for this and I don’t have a choice, or some other young hunny invites me as his date to a screening, I’m not likely to see Les Misérables in the theater.

Gus van Sant’s late entry into the fray might just have legs.  Despite a few efforts, we haven’t seen a Serious Environmental Issues contender for a while, and after Hurricane Sandy this might tap the pulse of an anxious, Prozac-popping world, which is great because I have a lot of time for Gus personally—he’s a wonderful, sweet, talented guy, so much so I even forgive him the mildly creepy penchant for pre-twink teen boys.  (It’s not creepy if you swath everyone in togas and pretend you’re in ancient Greece.)

Matt Damon co-wrote this piece.  Between him and Affleck this year, it looks like the early Oscar they won for writing Gus’ Good Will Hunting wasn’t a mistake or a fluke; they’re worthy filmmakers.

The true war story of our time is the Cold Civil War raging in America, and strife of any kind always makes for better drama.  When they’re good, I’m an unabashed fan of films like this, from Silkwood to Erin Brockovich, and so is the Academy.  We definitely agree on that score. This may be the dark horse with the godlike bloodline that upsets the race.

Okay, I’m running out of time here.  I’m going to make this a two-parter and continue on Tuesday.