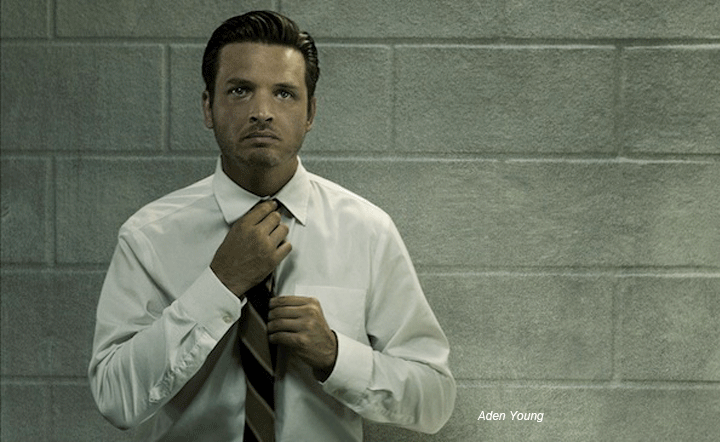 The last episode of the first season of Gran Via’s Rectify aired last night, and if nothing else it is worthy of the accolades with which it has been showered, although it’s not Breaking Bad. It’s is certainly fitting for The Sundance Channel; Ray McKinnon has created a show that feels like a six-hour festival film.

I’ve tried in vain to find a great quotation I stumbled on years ago about the formula for making a successful festival film, but I can’t dig it up anywhere online. I do remember that among the ingredients of that formula are that the film should be set in a remote, rural location; something terrible should have happened in the past that threatens to overwhelm the present; and it should star depressed people staring out of windows thinking about issues you couldn’t hope to understand. Rectify has those elements in spades, particularly the last staring-out-of-windows thing. Having spent nineteen years on death row in Georgia for ostensibly raping and murdering his high-school sweetheart, Daniel Holden (Aden Young) has been released back into society after new DNA evidence vacates his sentence. He was nearly put to death five times in the course of those years, but the executions were stayed on appeal. Evidently a dizzy, dreamy character even when he was younger, now that he has suffered unimaginable torments at the hands of the State, Daniel has lots of staring out of windows to do, and lots more cryptic things to say—he’s never quite sure if he’s actually alive, or if the reality he’s currently in isn’t fake.

That’s some strong-assed premise right there.

However, at first I wasn’t sure I could make it for six episodes of a humorless Being There set in Georgia (Slingblade comes to mind, too). Daniel sounds and behaves like a moron most of the time, so much so it’s very difficult to identify with him or find him sympathetic.

Georgia is one of those areas of America that I don’t find interesting or pleasant from any angle; that entire portion of the country embarrasses me, like it’s a loutish, insane relative the family has married into who cannot behave in any social situation and is dangerous, to boot. I alternate between regretting we fought the Civil War to keep them in the Union—all the South has done is cause us unremitting trouble—and the thought that we’d probably be at war with those bellicose religios constantly if they were a separate country that shared a border with us. The Mexicans are no doubt doubly thankful we kept our dysfunctional cousins in the fold and reined in. Somewhat.

It seems that you can’t make a successful American festival film (or a show that mimics one) unless it’s set in one of these dangerous, backward places; part of the danger is the lurking religious fanaticism—or just bigotry in general from friends, family and neighbors—and of course lots of heavily armed people ready to assert their sacred Second Amendment right at any moment.

That sort of relentlessly hostile environment does make for great underlying tension that would work to stronger effect if the show didn’t move like treacle, accompanied by a downtempo soundtrack that heaps melancholia onto excessive melodrama. It’s as if McKinnon is trying to make Dead Man Walking the TV series on a Sundance budget, which must be tight as a tick. The dialogue is also often willfully sparse; when Daniel and his mother, who is so depressed she’s nearly a dead woman walking, exchange words it had might as well be Morse code with a heavy southern accent.

The liveliest character is Daniel’s fiercely liberal sister, Amantha, played by an alternately whimsical and intense Abigail Spencer. Amantha has spent so much time trying to free the brother she is convinced was always innocent—despite his taped confession—that she’s even banging his lawyer, Jon Stern (Luke Kirby). Maybe I’m too much of a New Yorker, maybe I’m too conditioned by film and TV lawyers, maybe they behave differently down south (they do), but this is no litigating Jew-with-a-purpose I’ve ever encountered. I just can’t believe this laidback guy got Daniel off death row and released after nineteen years; maybe the appellate judges fell for the slightly worried frown Kirby dons now and then. Like most of the other characters, with the notable exception of the clichéd evil southern senator who’s out to throw Daniel back into the lion’s den (ah, okay, just got the meaning of the name), Stern is dreamy and aimless, like someone switched his Prozac with Xanax. Abigail Spencer as Amantha: Beautiful people have fucked-up lives, too.

The most engaging dynamic is between Daniel’s stepbrother, Ted Jr. (Clayne Crawford), and his sweet, delicate born-again wife, Tawney (Adelaide Clemens). It appears Crawford really is from Alabama, and he gives his role layered nuance and authenticity that I don’t feel with the others. Having said that, Rectify has just been renewed for a second season with a ten-episode order (this season was only six) and shows like this tend to gather momentum in their sophomore outings, with actors settling into roles that the writers have had time and practice to tweak.

When I was watching the last episode, a friend who was in another room who could only hear the dialogue burst out laughing. “This sounds too dramatic,” he said. True, it was an intense scene—the flashbacks to Daniel’s time on death row that serve as explanation for why he exhibits such flattened affect tend to be particularly seeped in emotionality—but the show overall could use a little tickle or a bitch slap now and then. Like the Sundance organization in general, it takes itself too seriously, or too portentously might be more accurate.

Still, the death penalty is a topic of paramount importance in this country. We keep talking about gay rights as being the last civil rights issue, but it’s really the slow mental torture and institutionalized murder of people—some of whom are innocent, many of whom are mentally challenged in some way—that is so egregious it’s almost unbearable to think about. As our contributor Eric Baker has pointed out, the death penalty isn’t justice, it’s revenge, and a terrible one it is. While I think Dead Man Walking was far more effective in conveying how wrong and barbaric capital punishment is, how utterly unbefitting it is for a country like ours (but yet how typical given the extreme duality of our national character), Rectify does take time to examine the issue and is unflinching in its portrayal of the system’s inhumanity.

Despite the slow pace, the excessive staring out of windows and the overwrought melodrama, I shall definitely watch season two. Again, my feeling is the creative team, the actors and Sundance Channel itself will achieve greater confidence and likely kick Rectify to where it deserves to be.