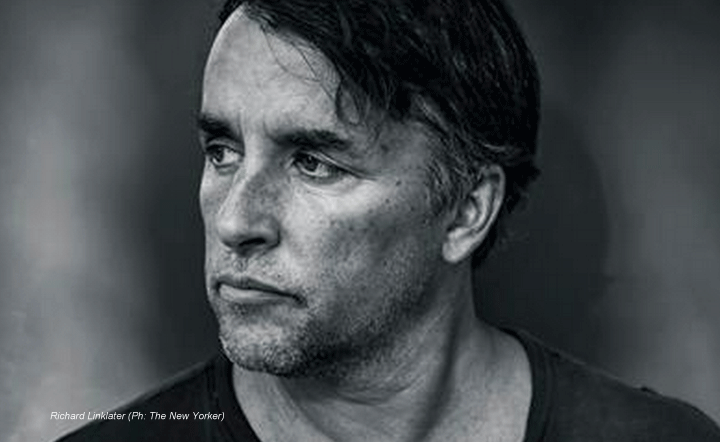 Like all inventors, Linklater’s experiments have been hit or miss. I was blown away by Waking Life, in which he used rotoscoping to recreate dreams. I was dazzled by the writing, the vision, the truthfulness. I was far less impressed with the similarly made A Scanner Darkly, with Keanu Reeves and Robert Downey, Jr. As a producer of mine summed it up, “Why rotoscope all those wonderful actors? What a waste of talent.”

Linklater’s new release, Boyhood, is the apotheosis of his quest for a singular voice and vision, the shimmering creation that finally emerges from his inventor’s garage, where he has been tinkering for twenty-five years. It soars, it roars, it is a success, worth all of the effort and time and risk, an inspiration to all of us who are on similar Quixotic missions.

That Boyhood was filmed over twelve years — specifically thirty-nine days over four thousand two hundred days — isn’t just a marketing ploy or a gimmick. It is the most naturally trippy device I’ve ever seen on film, an in-camera special effect that so wonderfully fucks with your mind you’re left begging to be mindfucked more. We see viral videos online every so often by a photographer who has taken pictures of his daughter over eighteen years since she was born, a montage set to emotional music that lifts spirits and makes us marvel at the beauty of procreation and existence in general. That’s the overall effect of Boyhood, and it lasts three worthwhile hours.

I hope this is such a hit that Linklater is forced to make a sequel, Manhood. And I hope he isn’t so stingy and makes it four hours long this time.

I cannot imagine we’re going to see a better original screenplay for the rest of the year. Linklater is already a formidable writer — often too eloquent for the movies — but he had twelve years to develop this as he was going along, to change the script and mold it to his actors’ changing physicalities and personalities, incorporating real-time shifts in society, from the wrongful invasion of Iraq to Obama’s election to the invasion of our lives by social media. It was clear to me within the first two minutes that this is the one to beat. All the way through, after each gem of a monologue or a snippet of banter so spare and angular as to be modernist, I repeated in my mind, “Best screenplay.”

The story follows Mason (Ellar Coltrane) and his deliberately ordinary family. How commonplace they are is part of why this is Linklater’s apotheosis; he uses no novelistic, overly dramatic turns to push the plot forward or grab attention. In the first sequence, the family moves from a small town somewhere in Texas to Houston so Mason’s single mom (Patricia Arquette in a career-reviving performance) can finish her degree and lift them out of near-poverty. That’s all. They move. It’s the most anti-Spielberg opening imaginable, as if Austin is flipping the finger at Hollywood before shuffling off to slacker glory. But it is no less momentous than boulders chasing Indiana Jones: This is a huge moment for a six-year-old boy. The guys in the audience have already become Mason — Ellar is so well cast, so empathetic, with those soulful eyes and that full mouth, that we are immediately and entirely vested in him — just as the girls have become his saucy, extroverted sister, Samantha, played by Linklater’s own daughter, Lorelei; although I’m not sure it’s appropriate to say that Lorelei ‘plays’ the role — she simply is Samantha. I have rarely seen a director elicit a performance like this from a child. A great deal of the naturalism and freshness must come from the real father-daughter relationship.

Ethan Hawke is the cool rocker dad with the awesome GTO Mopar car — the same person he plays in the Before Sunrise series — for whom the mother has no patience but whom the children adore. Few kids are lucky enough to have parent like that; he’s more often the cool uncle who is too irresponsible to have children. Most of us have fathers like one of the other two men the mother marries over twelve years.

In fact, I squirmed in recognition of the martinet, abusive alcoholic professor she marries the first time. After the only truly dramatic sequence of the film, when the battered mother grabs her kids and flees with only the clothing on their backs, Mason and Samantha wonder what will happen to their two step-siblings, with whom they were close. I know firsthand what happens; it’s a nightmare that lasts years. Mason and Samantha are right to be concerned. Even though she will have to struggle harder than ever to get her degree and be a single mother again, my inner child envied them for being able to get out of there when they could.

This is where Boyhood doesn’t just succeed, it triumphs. Linklater has made a film about all American families, including mine, and mine cannot be further from Mason’s socially, geographically, politically, whatever, you name it. But Mason and Samantha are who most Americans are now as a people, and it’s wonderful. For all of our Bibles and our guns and our ugly Texans and our uglier Tea Partiers, and all of our many flaws that we cannot stop pointing out to ourselves because relentless self-examination is part of what makes us us, most of us are pretty great, worthy of love and admiration.

Linklater has a light touch with his dialectic, but more often than not it has felt didactic in his earlier work. Boyhood underscores why: there’s usually a lack of context for it. In the Before Sunrise series, for instance, you have this couple meandering around plotlessly, jabbering away in an unnaturally articulate manner, without pausing for reflection — among other nuisances, that lack of pause forbids you to absorb much of what’s being said. You also can’t connect with what’s being said because there is no context for it; the setting and the structure of the film, what happens to the characters, are almost irrelevant. Linklater is being self-indulgent, but we allow it because the conversation is somewhat interesting, the characters pleasant and likeable.

In Boyhood his intellectualizations have context, they have a place and a purpose. For instance, after much thought about the creative process, the father gives up on a career in music — just as well; he’s not good enough — and does the right thing, which is to be the great dad that he is innately by being more responsible. Mason himself is a silent observer for the first two-thirds, but launches into his own existential monologues as he blossoms into a teenager questioning the meaning of life, an affable, creative individual without much real talent, just like his father. His questioning arises organically because what is happening to him is puzzling. Finally, Linklater’s signature dialectic not only becomes integral to the characters and plot, it sometimes moves them along.

My only beef with Linklater in general is something that is irrelevant to the non-filmmaker: He is no friend of cinematography. I am hard pressed to think of a director at his level with such a bland visual style. His camerawork is so normcore, so low tech it’s dull, uninspiring, unfair to the rest of the film. I was particularly irritated in the beginning of Boyhood: Either my contact lenses were blurry or some shots were simply out of focus. That’s just unforgivably sloppy for an instant classic destined to be one of the most important American films ever made.

I am delighted this film came out midsummer. What a satisfying, thrilling antidote. There’s not much that can make me feel patriotic. With Boyhood, Linklater almost has me hand on heart saying the pledge of allegiance to the Lone Star and Stripes.

Relationships: We Are Slaves to the Empire of Instinct

The Necessary Evils of Being Judgmental