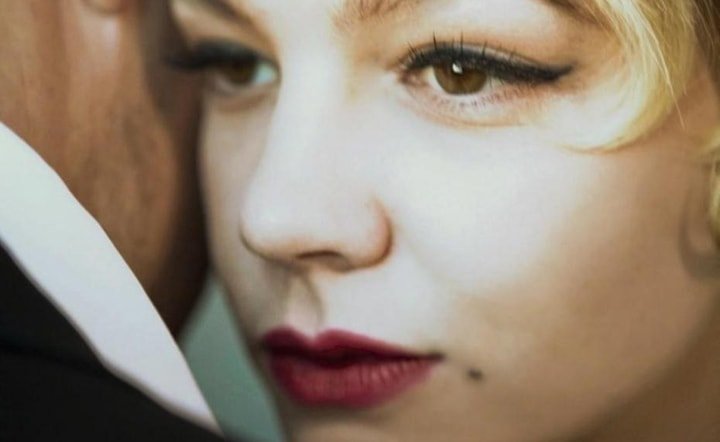 [The Great Gatsby] is a purely creative work — not trashy imaginings as in my stories but the sustained imagination of a sincere and yet radiant world.”

If only Baz Luhrmann had taken the time to go to Wikipedia to read those lines in the abridged history of the book, maybe he would have resisted serving up the two hours and twenty minutes of ‘trashy imaginings’ that his adaptation is.

I was dragged into seeing this despite year-old misgivings (thanks to the garish trailer) by dueling reviews from entertainment writers I admire, Marlow Stern of The Daily Beast and Dana Stevens from Slate. Stern began his review complaining about the thumping headache he had exiting the Ziegfeld Theater after seeing it. Stern said she enjoyed it despite her own early misgivings, and the fact she walked out of Moulin Rouge.

I didn’t walk out of Moulin Rouge, I thought it was great, but I was much gayer back then, or, more accurately and less flippantly, I was not as much of a purist when it comes to realistic cinema as I am today. I don’t know how anyone could dislike Moulin Rouge—Stevens is clearly an even harder hard-ass than I am. I was also impressed by Strictly Ballroom, Luhrmann’s clever, heartfelt and gripping debut feature about a ballroom competition in Sydney. I liked Romeo + Juliet, more because I was dazzled by Luhrmann’s hyper-kinetic directing, his unusual eye and the audacious mixing of pop music with Shakespeare; it was a contemporary adaptation of one of the Bard’s plays like none I’d ever seen before, and haven’t since. Australia was simply unfortunate, but after seeing Gatsby I have a notion why: Luhrmann is really a musical theater director-composer, and without those periodic interludes of song and dance, which only appear in the beginning of this latest outing, he’s a bit of a lame duck when it comes to drama and narrative. Elizabeth Debicki as Jordan Baker and Joel Edgerton as Tom Buchanan are the most watchable.

Having heaved a bucket of shit all over Gatsby in the beginning of this review, let me mention what’s great about it: Jay-Z’s music, for a start and foremost—Lurhman, a musician himself, must be a film scorer’s wet dream. There almost wasn’t enough of Jay-Z, or rather I wish it had been cranked up louder at some points, which is saying a lot for a filmmaker who prefers his soundtrack to hover under the film for emotional support with occasional peaks for transitions and doesn’t let it get too uppity in there. As far as the design of Gatsby goes, we’d might as well cut to the chase and hand Luhrmann’s wife, Catherine Martin, an Oscar right now for her sets and costumes.

Having said that I must thank, with all due sarcasm, the Luhrmann-Martins for correcting my belief that Art Deco was a bridge between Art Nouveau and Modernism. They firmly state that it was actually a momentary renaissance of Baroque, or the gayer-named Rococo. That the interior design of Gatsby’s house is unlikely to have been so outrageously Deco in 1922, when the story is set and the style was just taking off in France—the Chrysler Building wasn’t started until 1928, for instance—, is gleefully overlooked. But I quibble.

As for Simon Duggan’s cinematography and the special effects, they aren’t my thing. At all. As in, they’re the opposite of my thing. They took my focus away from the drama and performances, narrowing it squarely on the production where it didn’t belong if I was expected to engage with the drama and the characters.

I believe most people are familiar with the story: budding alcoholic and wannabe writer, Nick Carraway (Toby Maguire), has moved into a teeny cottage in West Egg on Long Island, a charming Hobbit’s burrow dwarfed by the H. Randolph Hearstian mansion next door, owned by the shady-but-idealistic Jay Gatsby. Gatsby uses Nick to chase Nick’s cousin, Daisy (Carey Mulligan), a woman he romanced five years earlier in Louisville, KT. Unable to wait for him both to get back from the War and to make enough money to be worthy of her, Daisy has married polo player Tom Buchanan (Joel Edgerton), the wealthiest bachelor in America. The Buchanans live directly across the bay from Carraway and Gatsby in ‘old money’ East Egg. Carraway helps Daisy and Gatsby to reunite, with disastrous consequences. The script by Luhrmann and Craig Pearce (Romeo + Juliet) lurches from enjoyably quippy and pithy (when they are directly quoting Fitzgerald—my, he had some fine lines) to pedantic, especially Maguire’s voice-over. As a writer, I believed the allusions to the process of my craft, but making pointed visual references to that process with overlays and inserts of text and letters was unnecessary and distracting.

I don’t believe that The Great Gatsby as a book is ‘unfilmable,’ a common criticism I have trouble understanding. Perhaps people who say that mean it lacks the plot twists, layers and drama that engaging cinema normally requires. But they actually seem to mean that film adaptations can’t do justice to the high stylings of Fitzgerald’s prose, which are the main reason to read him. I’d have to agree in this instance, but only because Luhrmann has delivered precisely the kind of ‘trashy imaginings’ the author thought he was avoiding in this novel. Maybe it was a contact headache from reading Marlow Stern’s review, but I had a splitting one when I left the theater that only four ibuprofen could bring under control; if you thought Avatar was colorful, it looks positively drab black and white compared to Gatsby.

The performances are fine, even if it takes a while to get used to the presentational style of acting Luhrmann forces the actors into. Mulligan in particular seems uncomfortable with that stylistic transition, with those silent-era expressions she is asked to don. I also didn’t buy Maguire as an anxious alcoholic with a host of other dysfunctions: his eyes are too dreamy, his breaking voice too youthful to convey dissolution and internal mayhem.

The most WTF casting is Amitabh Bachchan, the biggest star in Bollywood history, in the role of Gatsby’s boss, Jewish gangster Meyer Wolfsheim. I dunno, maybe there aren’t enough real American Jewish/Italian actors out there, or perhaps this is some cynical move intended to woo the Indian box office, which I doubt. I think it’s more of a nod to Bollywood, which seems to inform the jiggling spectacle of Luhrmann’s style. Let me put it this way: if I were as inspired by mainstream Indian cinema, I would have stayed there and made those films. Sadly, I find nothing amusing or appealing about Jell-O-colored kitsch; it makes me nauseous.

Indeed, an appropriate nickname for Luhrmann might be Baz Lurid, but after seeing Gatsby I think we should just excise that adjective from the English language altogether and replace it with his last name. Usage: “After showing a subdued, restrained collection for fall/winter 2013, Karl Lagerfeld has gone to the opposite side and presented his most Luhrmann show ever, with so many clashing florals and prints that editors and buyers in the front row started sneezing from allergies.”

There is a reason Luhrmann makes so few films, or it’s one of the reasons (I imagine that, like everyone, he has a hard time cobbling together the financing for these passion projects): They are a colossal effort, lovingly made, if not exactly the finest craftsmanship when it comes to CGI, but he seems to be deliberately chasing that glowing Thomas Kincaid palette, to hell with being subtle or realistic.

This isn’t a film for me, but it is for most women and more mainstream Gheys than I, as evidenced by the crowd attending the sneak preview I saw yesterday: fag hags in flapper-wear with their attendant giddy homo jesters. They clapped enthusiastically at the end, while I groaned with relief and from the pounding in my temples. I would suggest everyone who is not the above see something else.

The film is currently over-performing at the box office, which doesn’t surprise me. It’s likely to do more than $40 million this weekend, far better than I thought it would a year ago; I was convinced it was going to do worse than Australia. However, I think Luhrmann would have had greater success with this if he’d just gone whole hog and made more of a Moulin Rouge-type cinematic musical, sprinkling song and dance throughout rather than just at the beginning. A versatile director he isn’t, but nor was one of his obvious inspirations, the Great Busby Berkley.