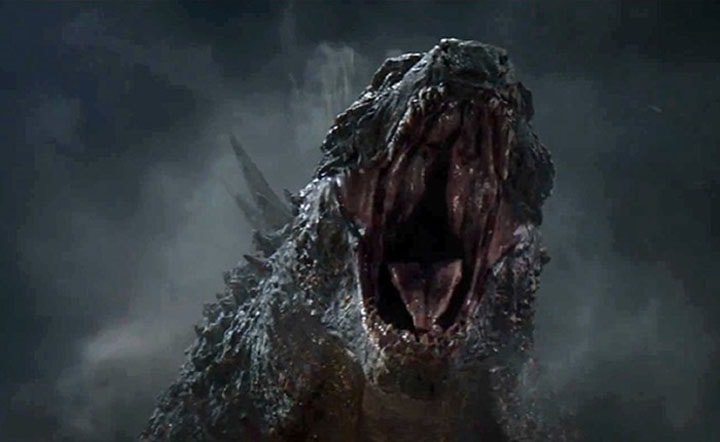 ‘Subtlety’ must have been the operative word that Edwards and his team carried with them into this epic production — that’s why I’m calling it a shadow play. It is the suggestion of devastation and its aftermath, that manipulation of dread, that hoists the movie on its back and marches Godzilla forward from first frame until last without stumbling. It is also a shadow play in a literal sense: the monsters and the action are, more often than not, occluded by billows of smoke, veils of darkness, strata of water, intense flares of light. We are frequently plunged into darkness with only exquisite sound design for guidance, like the bats the movie references throughout.

The story begins, as worthy films of this genre should, in the title sequence. Footage from the 50s atomic era — nuclear tests in the Bikini Islands and so forth — is layered with credits styled as top-secret government documents in the process of being redacted. Something sinister is afoot; a cover-up lurks beneath the Pacific. But it’s also a mnemonic for non-fanboys like me that Godzilla isn’t just the remake of a creature feature from the golden age of creature features. It’s a metaphor for nuclear weapons, one that arose not just from Cold War paranoia, but from the collective Japanese trauma that followed the bombings of Hiroshima and Nagasaki.

The action opens with an expositional flashback so similar to The Amazing Spider-Man 2 that they had might as well be the same story shot by different directors. The scientist father with the data everyone wants in Godzilla is Joe Brody, played by Walter White Bryan Cranston with the same indignant ferocity he brought to Breaking Bad. Following the death of his fellow nuclear-plant-engineer wife Sandra (Juliette Binoche) in an accident that is the Fukushima disaster times ten — it flattens the entire facility, evacuates a metropolis rivaling Tokyo in scale — Joe becomes even more obsessive in his quest for the truth than he already was. After a detour to a parallel story about a Japanese scientist, Dr. Ichiro Serizawa (Ken Watanabe), and his sidekick (Sally Hawkins), and their hunt for mysterious monsters that thrive on radiation both natural and manmade, we move forward to the present day to meet the hero, Ford Brody (Aaron Taylor-Johnson), Joe and Sandra’s only child. Fortunately for the plot, Ford has grown up to be a Navy explosives disposal technician who lives with his wife (Elizabeth Olson) and their only child — a son just like young Ford at the beginning of the film — in San Francisco, or well within the range of destruction for these monsters, which mankind, in its never-ending hubris and delusion about its dominance over nature, has incubated and nurtured with a mulch of nuclear waste. Thankfully, the god-like Godzilla — the good atomic bomb — is there to cleanse humanity and restore the balance.

If the opening sequence that focuses on the Brody family owes everything to Marvel comics, then the sequence focusing on Serizawa and his team is pure Spielberg. Indeed, the comparisons between Godzilla and Jaws are ricocheting around the ‘Net, and for good reason. Almost forty years since Spielberg changed the face of cinema for better and for worse by inventing the blockbuster, we have this movie as a worthy homage: those same crane shots that begin macro with the awe of a character’s expression, then swoop up to reveal devastation or life-threatening menace on a jaw-dropping scale; those setpieces that coil hire-wire tension like an industrial winch, then snap it free to smack you in the head; the lurking monster who darts in and out of visibility, then lurches forward to within inches of your face; the self-sacrificing monster who, like E.T., is misunderstood and lovable. And creatures courtesy Jurrasic Park.

Max Borenstein’s script is a solid action-film game plan, better than most of this genre, up there with Avengers. There are no snarky gags, however; this is serious, Japanesque business, and I appreciate that in drama. I also appreciate that there are delicate shades of emotionality that studiously avoid any mawkishness; again, Godzilla is a shadow play of subtleties, and that begins with the script.

Hats off to Seamus McGarvey, the cinematographer who also lensed Avengers, for adding such depth and resonance to a palette so somber it would have been impossible to pull off in the pre-hi-def era. Godzilla is a world more tenebrous that Apocalypse Now. It wouldn’t have survived transfer to VHS and the home screen fifteen years ago, when producers made us take the word “dark” out of the action description in scripts because “distributors are afraid of ‘dark’,” for the aforementioned reasons. Seamus’ camera is normally a lot like he is: alert, hyper-kinetic, lovely. In Godzilla he retains his signature layers of lighting that obviate the need for 3D, but his equally signature balletic camera movements are slowed — if he has been shooting Swan Lake up until now, in this he has gone Bhuto, the languid, melancholic Japanese dance form that emerged from the ashes of Hiroshima.

As is obvious from the trailer, with that plaintive monster call echoing ominously at the end, the sound design is critical to the mood, actually a part of the plot — the monsters are calling each other sonically. I’d just hand Erik Aadahl the Oscar for sound design right now; I can’t imagine what else is coming out this year that can surpass what he has created. It’s on a par with Gravity.

I really like Aaron Taylor-Johnson. He’s playing beefcake here — you’re waiting for his shirt to come off, yet it never does — but we all know he can remove those superhero duds and outdo fellow Brit Christian Bale with those intense and demanding roles. Elizabeth Olsen didn’t have much to do other than flit around anxiously, so she doesn’t do it. Indeed, it seems Gareth Edwards isn’t as imaginative with female characters as imaginatively as Joss Whedon is. It takes a special skill to make Sally Hawkins seem like a lame duck who is in the wrong movie, but Edwards achieves that. It doesn’t help that Hawkins shares the screen with Watanabe, who appears at a loss for motivation — throughout the movie, he cranes his neck forward, bug-eyed with amazement, and that’s it. He uses the same expression for indignation, and when he has to speak it’s as if he left his lines back in the hotel room and needs a few moments to get them.

I quibble. Godzilla might not be the kind of film I am rapturous about because it isn’t really a film in my book but a summer movie, but I appreciate its elegance, its exquisite craftsmanship, that it takes everything you’ve seen before and presents it unpredictably, in its own singular lexicon of style that is also an homage to the entire history of spectacular creature features. A great part of that unpredictability and singularity is due to the tapestry of subtleties that Edwards and company have woven. And when was the last time you went to a disaster movie featuring monsters taller than the highest skyscapers, wider than four city blocks, in which ‘subtle’ was the operative adjective?