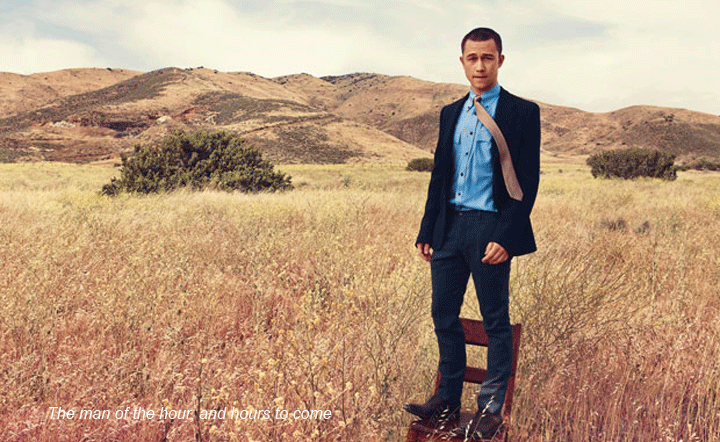 Having opened with that pretentious, malformed thought, let me state immediately that Looper is neither pretentious nor malformed.  After seeing it at a midnight screening last night at the Arclight Hollywood, I have to say that director Rian Johnson is now firmly one of my favorite American directors, far more so that either P.T. Anderson or Tarantino, both of whom I do find borderline, if not outright, pretentious.  It’s rare that I come out of a theater muttering “bastard,” seething with resentment for someone’s talent not just as a director, but as a superlative writer about whose script this seasoned writer could find no flaw in terms of dialogue and execution (I’ll talk about plot holes in a bit).  I fully understand that I am committing a sin of great blasphemy right now, and I’ll no doubt be downvoted on Reddit by scores of irate fanboys, but Tarantino never leaves me wishing I’d written his distracting verbal pyrotechnics.  If elegance is refusal, as Diana Vreeland once said, then Tarantino is a slovenly pig, whereas Johnson is nothing short of Mies van der Rohe. It’s all for the best, then, that just before the film began at the Arclight last night, Johnson himself made an appearance, pretending to be the usher who introduces each film at that theater, never once mentioning that he was really the director.  He spoke the entire usher monologue, which goes something like, “I shall be checking in from time to time to make sure the projection is up to Arclight standards… if you have a problem, please see me or someone dressed like me outside the theater.”  With a hall full of die-hard, hard-to-please movie geeks for a midnight performance, it went a long way to warm the anticipation everyone was feeling, which often sets a film up for disaster with a crowd like that.

I don’t remember the last time I heard a applause after a movie at any screening at the Arclight that wasn’t a festival or a premiere, especially with A Crowd Like That. They certainly didn’t applaud after the opening of The Master two weeks ago; on the contrary, you could feel the disappointment hissing out of the room like a punctured truck tire.  70 millimeter wasted on that? seemed to be the general thought.  Indeed, P.T. Anderson could learn something from Johnson’s usheresque humility on every level of the filmmaking process.

And applaud we did last night… yes, we, meaning me right along with my fellow geeks.

It isn’t necessary to see the first film Johnson made with Joseph Gordon-Levitt, Brick (2005), but it certainly helps if you’d like to see a bona fide auteur writer-director’s progression.  True, both Brick and Looper are laced with references to filmmakers and genres that have come before, but that can be said of all language in general; it is up to the auteur to develop a distinctive style of his own, not reinvent the medium altogether.  I thought Brick was clever and entertaining, and, yes, I once again came out of the theater jealous of Johnson’s skill, especially for someone so young creating his first feature by the seat of his pants and the heat of his passion and the uncompromising conviction in the rightness of his vision.

The first third of Looper is about what the trailer spells out: a mob hit man, played by Joseph Gordon-Levitt, whacks people from the future, who are sent back in time for that purpose.  When it comes time to “close the loop” on his own future self (Bruce Willis)—as must happen to all Loopers eventually—something goes wrong and mayhem breaks loose. As I mentioned, there are holes in the plot, considerable logistical issues, but all stories in this sub-genre are sieves that way—you are never going to plug up all the holes; others will just keep reappearing, as many as there are possible outcomes to the story.  The best you can hope for with the time-traveling piece is to create something so entertaining that only the nitpickiest of geeks is going to troll for inconsistencies and find them showstoppers.  Most people are going to sit back and enjoy it as pure mind-fuck fun and ignore the narrative bumps.

Johnson glosses over many of the most glaring tears in the narrative by having Willis say that time travel fucks with his memory, makes everything cloudy, which excuses hiccups in his actions, or more often inactions.  It’s a good little speech, and it’s delivered in the freakiest moment of the film, when Willis and Joseph Gordon-Levitt are sitting opposite each other in a diner, and you go, “Holy shit, Joe is totally killing this as Willis,” and you can hear them at the podium at the end of February announcing the winner for Best Makeup, and it’s going to be for Looper, and for the first time you start to wonder if Joe himself might not be nominated.  Yes, he is that good, and it is such fun to watch him be that good.

If you think about it, Willis must be a bitch to imitate.  We’re not talking about Arnold Schwarzenegger here, who has distinctive mnemonics in his accent and characteristics that a mimic can hit and thereby pull off a plausible impersonation.  In Looper more than anywhere, you realize that Willis never does much of anything but squint his eyes and smile on occasion, most times wryly.  Otherwise, he’s like the man in the iron mask, which must be doubly difficult for Joe, whose acting style relies on frustrated-puppy expressions and emoting through his eyebrows.

Whether Joe will be nominated for an Oscar is a call I would rather not make this early on; in this instance, I need to see how a movie performs to factor that into whether the Academy will consider him.  I also need to see the other contenders.  Let’s just say that Joe so completely disappears into the role that after the first ten minutes you stop marveling at how good he is as a younger Willis and just assume that he is a younger Willis, and this is some new CG technology they’ve invented to take thirty years off an actor’s life.

That was one of the intellectual points I found most intriguing as a middle-aged man who is writing a series of articles entitled Letters to My Younger Self.  I’ve never met anyone who wouldn’t go back and correct the past to some degree, if he had the knowledge he has now; otherwise, he wouldn’t repeat youth for all the money in the world.  I’ve found this syndrome so prevalent among my peers that I was sure there must be a name for it, but all I’m finding online is “Glory Day Syndrome,” coined by some quack self-help guru, which is about constantly reliving your perceived glory days.  I only have one friend like that.  It’s sad because no amount of correcting her narrative of the past—which she has painted as idyllic and, yes, glorious, when in fact was rather dark and depressing—will make her see things the way they really happened.  I’ve learned to let her be with her delusions; they make her so much happier.

In the case of Looper, it’s about correcting the past to improve the future, which is the reason I would go back and choose different directions.  However, like my glory-day friend, I am selective about which events and deeds I would play out differently; I try not to imagine their consequences with too much detail because that would make the whole exercise futile.

Take for instance all the years I spent in India.  Had I not gone there, had I done the “right thing,” and stayed in film school, and moved in the opposite direction, to Hollywood instead of the time-waster that was Bollywood, I would be in very different circumstances now.  But my sister would never have met my Indian roommate in Delhi, and my nieces would never have been born.  So: career or family?  For someone who doesn’t have a job so much as a vocation he loves more than anything, that’s a tough question.  Luckily, it is entirely hypothetical, a fantasy, unless you believe in parallel universes, in which case I sincerely hope that in another reality I have that house in the Hills with the cantilevered vanishing-edge pool. Daniels is an unlikely godfather, but a great one.

In some ways, Looper includes elements from past Bruce Willis films, notably Sixth Sense for its twists and surprises, and Terry Gilliam’s Twelve Monkeys for the time-travel mind fuckery.  But Looper has none of Gilliam’s relentless, distracting, wide-angle close-up goofiness.  This film is earnest, while at the same time not so serious that it doesn’t deliver some genuinely witty moments, and you reward that earnestness by buying into the implausible reality and overlooking the gaping plot holes.

Supporting performances by Jeff Daniels, who is killing it with the late-life career between this and The Newsroom, and Emily Blunt are another testament to Johnson’s skills as a director; he has extracted the finest both actors can achieve within the limited emotional parameters of a thriller, which is saying a lot.  There is a third character I cannot mention here without spoilers, who is both a natural and again superbly directed.

Indeed, the reason the trailer is so confounding is it makes little reference to the remaining two thirds of the film, and anyone who has seen Looper should keep it that way for those who haven’t.  As I said about it in a preview of fall films that I published a little while back:

That last bit is important: it is films like this that really make you understand what a waste of money most of the others are.

Looper is beautifully crafted on all levels, I cannot recommend it highly enough.  If it weren’t for the inevitable plot holes, I would give it a Bravo, but this is rather like my giving a gymnast nine out of ten when she appears to have executed a clever, convoluted routine flawlessly, based on a technicality that few others will notice.