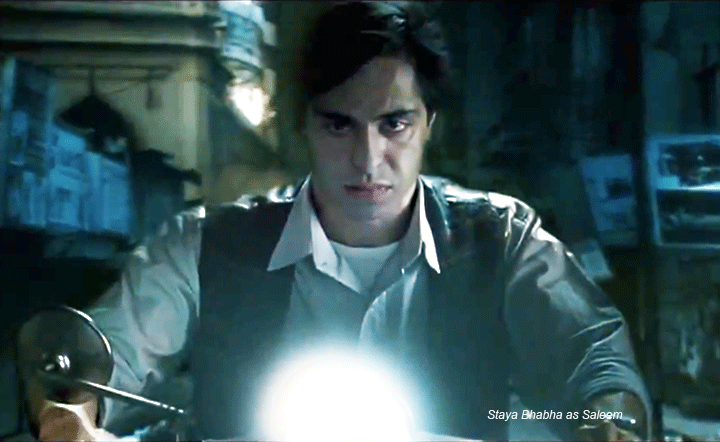 A less dramatic statement would be that Midnight’s Children is the text that transformed my writing the most. Rushdie introduced me to how plasticine the English language can be, how a true maestro like him can be the archly eyebrowed Hobson-Jobson ringmaster of a rumble-tumble Cirque du Jeu de Mots, raucous entertainment starring three-ring layers of meaning under the glittering mirror-work shamiana of a single sentence. (That was my feeble impersonation of his style.)

Watching the film adaptation of this personally seminal book, winner of the Booker of Bookers for the 80s, I tried to remember where exactly I read Midnight’s Children. Was it in Bombay before the Hindu funda fundies changed its name to Mumbai, when I was shut in during an interminable monsoon and nothing was dry for months, to the extent that at a certain point we were sloshing around town looking for silica packets to protect the camera equipment from growing mold, having given up on trying to stop it from leeching onto our own skin? Was it in the more arid Delhi over a torpid summer week waiting for production to resume on a moribund film I was scripting, when I would have alternated reading Rushdie’s breathtaking passages with prayers that the bijli wouldn’t cut and I’d be left without air conditioning for hours on end until my own sweat would be the most welcome coolant? Or was it in Srinagar, Kashmir, that paradise on earth where the engaging first sequences of Midnight’s Children take place, in my study overlooking the garden with one hundred different types of rose, which itself overlooked Dal Lake and that ruined bridge they paddle past in those opening sequences, the civil war that would push me out of the Valley rumbling in the background, spilling over from bellicose Pakistan?

Yeah, this was my view for a year.

It frustrated me during the screening that I couldn’t remember exactly where I read it, all I know is that every scene in this film drew me back to my many years in India, in those exact locations. It seems I might have read it in all three places at once—precise locations on my memoryscape are becoming as imprecise and relative as the past itself. All I am sure of is I had been in India for long enough that I could understand Rushdie’s subtext and puns, specifically the Hindi and cultural references that speckle his text. As I was reminded while watching a party scene in the film, I do remember the moment that I got the joke about the Maharani of Cooch Nahin—it’s a play on the principality in eastern India, Cooch Behar—native state of the storied Rajmata of Jaipur—and cooch nahin, Hindi for ‘nothing.’ She is the Queen of Nothing. Titter titter… I got it! In that moment, a moment I’m not sure where, Rushdie handed me my diploma as the new old India hand I had studied so passionately to become.

“Having an author adapt his own book to a script is the kiss of death,” a hyperactive agent from William Morris with little self-censorship said to me once. That isn’t true of Rushdie’s script for this film. True, he is indulged to the extent he is not only allowed a narrator—a weakening intrusion we formalists avoid at all costs, and which could have been dodged here—but his is the voice of that narrator. The effect is as if you’re listening to an author read passages at his book signing, and there is no better ringmaster for his own rumble-tumble words than that.

Midnight’s Children is two and a half hours long, and it doesn’t go by quickly—you’re in for a magical realist Gone With the Wind set in India, with Partition stepping in for the Civil War. But it couldn’t not have been that long; all things considered, it has been decently abridged for the screen. The real problem is I don’t know how interesting or entertaining the film will be for Westerners who aren’t old India hands.

The story is X-Men, I see that now but didn’t when I read the book because I was unfamiliar with the comic book—Rushdie is a devoted, encyclopedic fan of pop culture, especially movies. A thousand and one mutant children are born around midnight on the eve of Independence from Britain on August 14, 1947, the strength of their superpowers in direct proportion to the distance in time to the stroke of midnight they were born, which is when the protagonist and narrator, Saleem (Satya Bhabha), and his nemesis Shiva (Siddarth) were born, making them senior to the other children in power. Like Professor Xavier, Saleem has the ability to see and communicate with other Midnight’s Children, just as Shiva has the charisma and indomitable strength of Magneto. Swapped at birth, the two battle it out over thirty years in a tale so convoluted that it can’t help but be messy and jarring at times as a film. The full span of the narrative is sixty years, beginning with a stunning prelude in Kashmir and Agra before Independence. This burst from the gate made the overall effect of the entire film like watching a long-distance slalom ski race, starting on a peak, jumping and dodging myriad precarious moguls along the way, and finally petering out ho-humly at the finish line.

Director Deepa Mehta has always had a tasteful, stylish eye. Midnight’s Children is the apotheosis of her work so far, which like every filmmaker’s has had its ups and downs. This project is ambitious, and she was brave to take it on, but Mehta has never lacked bravery; like Rushdie and his fatwa, she has faced enormous controversy in India over the years, specifically when she tried to film Water in the holy city of Varanasi but had her set burned to the ground by Hindu funda fundies who objected to the portrayal of child widows forced to live cloistered lives because men they are forced to marry in the first instance die early (she moved production to Sri Lanka). Her Achilles heel is one that, from a Westerner’s standpoint, plagues many Indian filmmakers: a penchant for overwrought emotionalism that borders on cheesy. That penchant grinds the last third of Midnight’s Children to that ho-hum finish.

I suppose that’s what bothered me the most: I wanted desperately to be moved by Midnight’s Children because of the importance the book and India herself played in my life. But I wasn’t moved, not for a single instant, although I did admire many of the sequences, particularly when Saleem and his sister are on the verandah dancing to the Hindi version of “Let’s Twist Again,” and the sister’s subsequent recital in Karachi, singing behind a gauze curtain for the President of Pakistan. It was after the film that the emotions hit me, when I was dragged across the memoryscape by my own nostalgia for the country I adopted and in many ways that aren’t professional love more than my own (I hate working in India, drives me bonkers). Looking out over the palm trees and arid hills of Los Angeles—so like India, minus the smells, the clangs and bangs, the somnolent haze—I remembered the last time I saw Shabana Azmi, the lead in Mehta’s breakout feature, Fire, who also has a small role in Midnight’s Children. We were at her home in Bombay and she was in a sari standing in front of a full-length mirror combing her long black hair. As usual, she talked to me as if I were a despised relative who had stepped on her last nerve, but she had a fraught relationship with the director I was working for, as we all did. I was there to coach her mother, Shaukat Kaifi, who was playing a small role in the film I had scripted. Kaifi spoke no English and had to learn her lines by rote, and it was all my fault this was being shot in English to begin with. There was nothing I could do to charm these women, bring them over to my side, and that was frustrating.

There Shabana was last night playing a grandmother in an English-speaking Indian film, still grumpy and nasty after almost as many years as span the main story of Midnight’s Children. I noted how she pretty much only spoke Hindi. How comforting it was to see her again just as she always was, but fatter, older, like me. If only the film itself had moved me as much as these scattered bittersweet mementos.

I don’t know whether Rushdie ever aspired to be a screenwriter. I suspect like most novelists he looks down on us more than many of us do ourselves (I happen to find it a thrilling and challenging medium). While he’s not going to pick up the Oscar of Oscars for this, in his own fashion he has flaunted filmmaking convention in order to stay faithful to himself and his style. Fair enough. However, while he did influence my prose, I cannot say that he will do the same to my scripting.

I would recommend Midnight’s Children if you are a Rushdie fan and loved this particular book as much as I did. Otherwise, Netflix it.