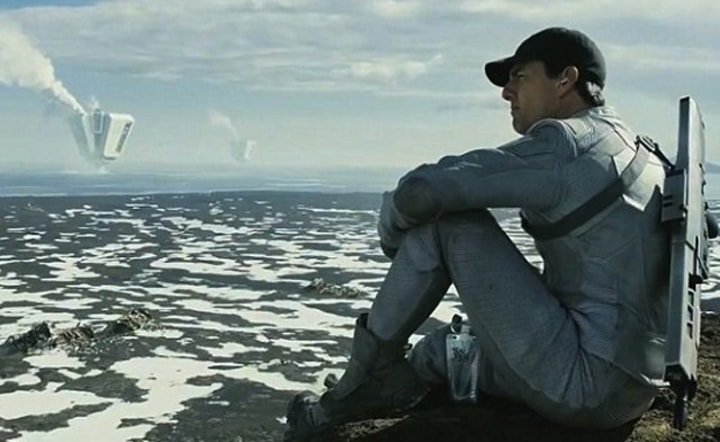 I have to apologize to whomever was sitting within earshot of me at the Arclight Hollywood at the midnight screening of Les Misérables when it opened and I saw the trailer for Joseph Kosinski’s Oblivion for the first time.  I boomed, “Oh great, more Scientology bullshit.”  From the look of the trailer, it seemed clear to me that Tom Cruise had finally hopped his last sofa and made his own Battlefield Earth, the stinker about a dystopian Earth based on Scientology myth that Cruise’s fellow cult member and non-Ghey John Travolta caused to be made back in 2000.

Sadly, this is not the case, and I say sadly because I had intended to have great fun slicing and dicing Oblivion, even if Cruise has made himself into such a soft target over the past ten years that I’m not sure how great that fun would have been.  To goose it up, I was even planning to don my Cruise persona and have him review the film himself and explain why it wasn’t crap from a Scientology point of view, similar to the spoof I did last year, The Tom Cruise Guide to Gay Sex in Your 50s. The Kingslayer has a bit role, too.

I can be forgiven for being duped into thinking Oblivion was going to be crap because the trailer is misleading.  It has to be.  Not only does it feature Cruise’s signature wooden, self-consciously masculine voice-over, it makes it seem like the film is one big shoot-‘em-up action caper in the vein of the Mission: Impossible series.  While it does feature requisite action and chase sequences, Oblivion is actually a meditative, imaginative pretzel-plotted homage to classic mid-century sci-fi literature reminiscent of Bradbury, Asimov and Heinlein.

Another important trait of the film that is missed in the trailer is how breathtaking most of the visual treatment is.  At many moments it’s so stunning that it would make Kubrick envious, were it not clear he is also being paid homage.  That blatant bow to the creator of 2001: A Space Odyssey comes too far into the film for me to reveal it without major spoiler alerts, and this is the sort of film you should know as little about the plot as possible before seeing it, and see it you should.

The other comparison that I probably shouldn’t make because it’s a bit of a spoiler—but which everyone else will make, so fuck it—is that this is The Matrix meets Duncan Jones’ Moon, which starred Sam Rockwell in the role Cruise has here, the technician in charge of drone maintenance on a futuristic mining operation.

If I do my calculations haphazardly, Oblivion is supposed to take place toward the end of this century.  There has been a war with an alien invader, who destroyed the moon and almost wiped out humanity through resulting natural disasters.  Jack (Cruise) and his romantic and professional partner Victoria (Andrea Riseborough) are stationed above the clouds of a now-toxic Earth in a house that could be described as how minimalist master Tadao Ando would redesign the Jetson residence using mostly glass and steel.

Both Jack and Victoria have had their memories erased to guarantee the safety of the mission lest they fall into the hands of the defeated alien invaders, the Scavs, who still roam the planet threatening Jack and the power plants that the drones he services protect. But Jack keeps having flashbacks of a mysterious woman with bee-stung lips, so not all has been forgotten.

As with many of these twisting, memory-recall movies, there are gaping holes in the plot and premise; actually, in this case they are yawning canyons.  And there are at least four moments of cheesy sentimentality (Christ, Hollywood, give the specious moralizing a break, already!) that bitch slap you away from the spellbinding beauty and engaging storyline.  But I forgave all of that gladly, and surrendered to Kosinki’s reality in the same way I used to as a kid reading the aforementioned sci-fi authors.

Here’s a sentence I thought I’d never write about a film: The second act lags, thankfully.  Or it lingers with confidence, much as Kubrick would have; this isn’t the usual Cruise-controlled roller-coaster ride, again as the trailer would have you believe; it’s a trip to the planetarium with occasional bursts of early George Lucas.  There are long moments when it seems as if Kosinki is saying, “This is what we’ll look at for a few minutes. Isn’t it gorgeous and cool?  Shhh… just relax while I slip on a little downtempo music…”

Yeah, Oblivion is one of those movies I should have smoked a joint before seeing, but to its credit it doesn’t need that enhancement.

Amazingly, but so very wisely, Kosinski didn’t shoot this in 3D!  How the fuck did he get away with that?  I’ll bet Cruise backed him on it, maybe citing Kubrick as inspiration.  However, had I not been so heavily pre-prejudiced by the trailer and had I known what a visual feast this was going to be, I would have made the effort to see it in IMAX, which is saying a lot because I’m not someone who likes his cinema experience to be a theme park ride.

The projections are that Oblivion will do a healthy $30 million at the U.S. box office, having already pulled in $77 million when it opened in foreign markets last weekend.  I’m going to bet that it does better than that, as it should, but I’m pretty terrible at box office predictions.  Suffice to say that Tom Cruise has pulled himself back from the edge of extinction for me, and probably for a lot of viewers like me.  While I will always be pre-prejudicial about his films because he’s going to continue to make mostly crap, he’s placed himself back on a middle ground he enjoyed with me in the early part of the century when he made Spielberg’s Minority Report and Paul Thomas Anderson’s Magnolia.

The talent I will definitely be looking out for is Joseph Kosinki.  It’s rare that I leave a theater dripping with professional envy, but I was glow-in-the-dark green last night after seeing Oblivion.