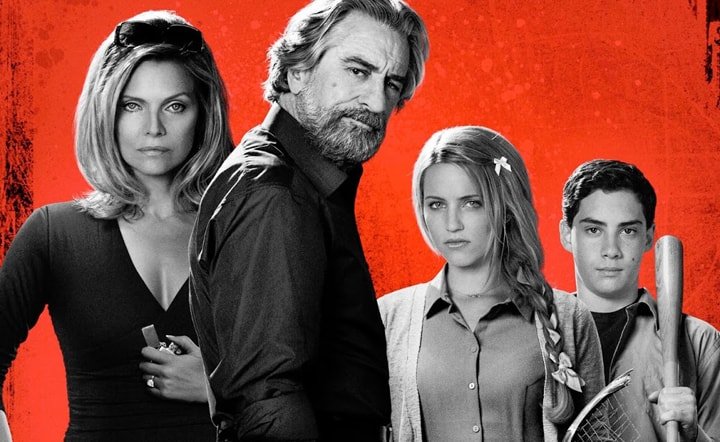 In many ways, Luc Besson is the French Steven Soderbergh. Both broke out exceedingly early with remarkable films that catapulted them to the top of the game: Soderbergh was twenty-six when he won the Palm d’Or for sex, lies and videotape, Besson twenty-four when he directed the action hit The Last Battle, which might not have won such a prestigious award, but what better reward could you possibly want  than the sort of career that film helped launch?

I would also call both directors pseudo-auteurs: They might be treated as auteurs, but the breadth and diversity of their work means that most of their films don’t bear a personal hallmark the way Woody Allen’s or Hitchcock’s do — they could be directed by any number of people. Another uncanny similarity: both vocally retired from the business only to jump back in a few months later, proving that showbiz is too thrilling an addiction to kick permanently. In terms of choices, both are drawn to the gangster comedy, and delight in the absurd side of sadistic, sociopathic behavior and, in Besson’s case at least, extreme violence. Oddly, it works because their brand of screwball mobster mayhem borders on slapstick; it’s so over the top that it is as un-appalling as a Tom and Jerry cartoon. Of course, Besson brings a French twist to his brand of crime burlesque, and in the case of The Family that twist is integral to the story and its setting. In other words, it works far better set in France than you might think. The Manzoni family is in a witness protection program in France, on the run from the mob in New York, chased by a $20-million bounty on Giovanni Manzoni (Robert De Niro) for having ratted out his crime family (one of the multiple meanings of the title). Neither Giovanni nor the other members of his feral family can contain their antics long enough for them to settle down and blend in, so the FBI team headed by Agent Stanfield (Tommy Lee Jones) in charge of protecting the Manzonis is forced to relocate them for the third or fourth time from the Riviera to a small backwater town in Normandy. But of course those antics flare up again and flag the attention of the mobsters out for revenge and bounty.

It is so good to see Michelle Pfeiffer back in full force playing Maggie, Giovanni’s arsonist wife and tough-loving mother of wildcat Belle (Glee’s Dianna Argon) and smooth 14-year-old Warren (John D’Leo). I don’t know why Pfeiffer doesn’t work at least as much as Meryl Streep. I mean, I do know: it’s probably a lack of the kind of quality roles she made when she was younger and she’s too smart, too accomplished to make crap. And she doesn’t cause projects to get made just because she’s attached to them, the way Streep can, and, okay, so they’re not quite on the same level in terms of raw talent. Still, what a delight Pfeiffer is to watch, that arch and arched upper lip serving as a parenthetical comment to everything she says and reacts to: (“This fucking sucks and needs to be blown up”); (“You’re doing too much blow, Tony, you disgust me”); (“You will get straight As, you just don’t know it yet”). And her easy-breezy chemistry with De Niro in this film trumps any on-screen relationship she’s had with other leading men, Pacino included.

I still don’t know what to make of Dianna Argon, never have. On the one hand, she is so caught up in her particular All-American-goddess physicality that it botoxes her performance with self-consciousness, and that is never more glaring than when she’s in a scene with Pfeiffer, a woman for whom her extraordinary beauty — and it is still very much there at fifty-five — is at best an afterthought (“So you think I’m hot? Have you ever had an original thought?”) On the other hand, Argon is manifestly a highly skilled performer who has trained up on one of the most demanding shows on TV, and that professionalism and versatility — not to mention her willingness to get dirty and nasty — certainly comes roaring out in her Belle. It must be noted that these are stand-out, histrionic roles, too: both mother and daughter are reprises of the gorgeous bloodthirsty warrior woman who appears so often in Besson’s films that I’m beginning to suspect he has an innate vagina dentata complex. Like Belle and Maggie, young Warren is a chip off old Giovanni’s block, a budding con artist and thug who teams with his sister to quickly seize power at the local high school. But neither the parents nor the kids are able to integrate as they are supposed to, much to the constant despair of the FBI. They are Americans in full possession of their exceptionalism, and unapologetic about it. This is the norm for fish-out-of-water comedies: the leads’ true natures cannot be masked and threaten the situation at hand, tragic flaws that are given an extra boost because they are comically juxtaposed with rural bourgeois French culture. A clever subtext is that culture is by now heavily Americanized, as symbolized by the film’s primary location — Normandy — where we staged our invasion of Europe at the end of World War II, remaining as cultural colonialists ever since. D-Day is continually referenced throughout the story, one of a few subthemes that ingeniously works both as a plot device and as a non-judgmental (or non-negative) commentary on the state of Euro-American relations.

Without giving too much away, another subtheme is De Niro himself as an actor and his role as a catalyst and icon of the modern mafia flick. There is a brilliant scene late in The Family that takes place at the screening of a Scorsese classic at the local film society, which serves as a self-referential tribute to De Niro. It beats anything AFI could ever conjure up as an actual tribute simply because it’s placed within the context of a gangster film; i.e., it’s De Niro playing a gangster who is watching De Niro playing a gangster. In any other director’s hands, this might have come off as contrived and perhaps silly, but in Besson’s it is so meaningful and appropriate that it almost rustles up mid-scene applause, both for its rib-tickling cleverness and for highlighting what a remarkable, influential career De Niro has had. I’m almost embarrassed how much I laughed during this scene. It was the styling.

There aren’t many scripts as precise, engaging and purely entertaining as the one Besson has penned with Michael Caleo. And with those layers of meaning thrown in amidst the crackling dialogue you’ve got a sure winner right there in my book. The film overall might be slight, but that’s a compliment: it’s so much sheer, wicked fun that you want more. This is a master at work — Besson has made a lot of mistakes in his career, as we all have, but The Family is an apotheosis of sorts that underscores how profoundly he delights in and understands the full capabilities of the medium. It isn’t easy to craft a script that is both hilarious — I think I guffawed a dozen times, mostly at Pfeiffer’s camp New Yawker bravado — and equitably dramatic, much less one with such crafty transitions and match cuts. In fact, I would say that The Family should be studied in film school for its uncommonly deft use of match cuts, or compositional jumps from one scene to the next that are visually similar, a linking by metaphor that bolts the action together. They aren’t easy to do this effectively, but hats off to Maestro Besson for making it look like a breeze.

I have a feeling this is a Little Film That Could, one that might sneak into movie theaters and platform up to a healthy box office return. It isn’t often that you have a film for the entire older family, something that appeals to teens and the middle-aged alike. It will certainly do well in Europe, deservedly so: under the violence and the silliness lies probably the most astute and compassionate commentary on the familial love/hate relationship between America and the Old World — Oh, how we chafe against and scorn those fuddy-duddies! Oh, how much delight and comfort they take in patronizing us! — and that is the deepest layer of meaning the title offers.