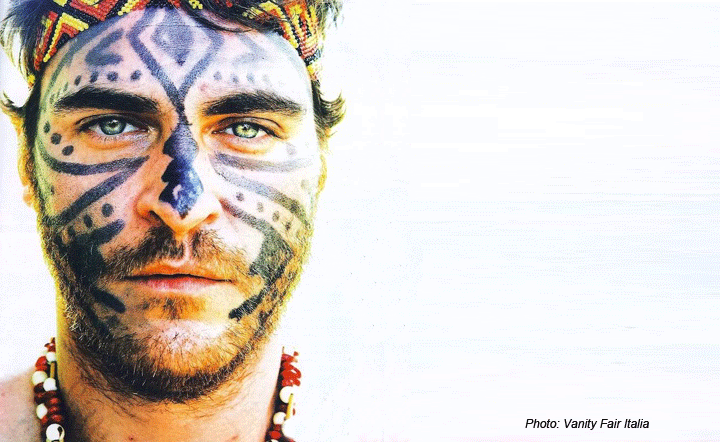 My layman’s psychological analysis of Joaquin Phoenix’s character, Freddy Quell, isn’t that he’s schizophrenic.  In fact, during one of the film’s more tortured sequences, which also happens to be its weakest, the master, Lancaster Dodd, played by Philip Seymour Hoffman, tries unsuccessfully to induce hallucinations in Freddy by having him alternately touch a wall and a window, back and forth for hours, in order to get him to imagine them as different objects than what they are.  Freddy also doesn’t suffer from delusions or disordered thought, two other primary symptoms of that personality type.  Rather, it would appear that the master himself is the schizophrenic, a point Anderson makes obliquely but forcefully.  Freddy is simply a dumb, violent rageaholic, a sex addict with the usual attachment issues sex addicts have, and an alcoholic who brews his own moonshine from whatever is available, from paint thinner, to photo developing chemicals, to Lysol mouth wash.  As someone who loves to drink, and drink lots when I do, I was filled with admiration for Freddy’s resourcefulness and determination to get as fucked up as he can as often as possible.

I’m too vain and ambitious to be a good addict, and I find addicts annoying in person, but I do enjoy watching them on screen.  They are some of the few male dramatic archetypes that are allowed to behave loose, wild and histrionic.  In that respect, Freddy has some fine moments, whether it is draining some sort of fluid directly into his mouth from the hose of a torpedo on his World War II naval battleship at the beginning of the film, or mixing a heady custom-made brew on Dodd’s yacht, on which he stows away after he has hit rock bottom.

Any denials or press-conference sidesteppings that The Master is about Scientology are disingenuous on the filmmaker’s part.  It’s L. Ron Hubbard and his family and followers, and how they got started, period.  Showing the creation of the world’s wackiest religion through the eyes of a feral, drunk simpleton is one of many strokes of genius that frame this piece, albeit a stroke that is a mite too pleased with its own differentness, which ultimately hobbles the film from ever achieving its true potential. Oh right, Amy Adams is in it, too. But the women are just much-obsessed-about background objects.

The Master feels like the adaptation of a classic midcentury short story that has already been performed as a ballet, and extended pas de deux between Dodd and Freddy.  Now thirty-seven, but looking more like forty-five, Phoenix has become so gnarly that I found myself squinting at times from the impact his performance and physicality were having on my brain.  The fact I saw it at the Arclight Hollywood, where it was screened in the 70 millimeter format it was mostly shot in, may have contributed to that effect; there was extra humanity flowing from those hyper-real pores and those juddering, nuanced facial expressions.

In this film in particular more than others he has made, Phoenix portrays a character with two physical characteristics that have almost separate roles of their own supporting his: the scar on his lip and his misaligned left shoulder.  Because of the 70 millimeter and the fact Anderson chose to shoot a great portion of this in extreme close up, I was constantly aware of the lip scar (it isn’t a hair lip, according the internet, which is splitting hairs because it sure looks like one to me), and was from time to time distracted away from the drama by it.  According to colleagues of mine who have worked with him in the past, great pains have been taken to mask Phoenix’s gimpy left shoulder, but in The Master he flaunts it, making it part of his stance, as if he’s been saving this part of his performance arsenal for the right role, and Freddy Quell is it.  The way Freddy stands and moves, with his hands on his hips, slouched forward, gives him the crookedly effete demeanor a super-slim female post-war fashion model with a butt-ugly face.  He makes himself so unappealing, in fact, that it is unbelievable that he is in the least bit attractive to such attractive women.  Or that he is in any way a brawling badass.

Hoffman on the other hand… Oh, boy.  That is charisma with a capital K.  If he were a real guru, I would consider following him.

Midway through, I thought to myself, If this is a ballet, then Hoffman and Phoenix are the dancing hippo and crocodile from ‘Fantasia.’  Which was just my way of lessening the quickening of my heart by injecting it with humor during any number of scenes in which Hoffman dazzles with his virtuosity, in exactly the same way Meryl Streep occasionally consumes a compelling role so completely that she becomes a shimmering shape-shifter whose performance is so enthralling it threatens to consume you as well. Indeed, the film is called The Master, not The Disciple, and it is Dodd who is the real protagonist.  Freddy is a foil, as my high-school English teachers used to call the antagonist in certain Shakespeare tragedies, and I’m not sure that shifting the focus was the best decision; had Anderson followed a more traditional route and made Dodd the focal point, The Master could easily be a modern Citizen Cane.  It is impossible to pin one’s hopes and aspirations on a character as warped and deformed inside and out as Phoenix’s Freddy, whereas you can’t keep your eyes off Hoffman’s Dodd.

Off and on, the cinematography reminded me of some of art photographer Wolfgang Tillman’s more abstruse, deceptively pedestrian photo essays, but more thoughtfully composed.  The score is also something of a star itself, moving gracefully between classically inspired Romantic and midcentury modern dissonance, I think; I’m not musically well versed enough to explain what it is, except to say it is pleasant, notable and appropriate to the piece.  Perhaps the greatest tribute to Hoffman’s almost divine skills as a performer is that he’s able to sing “Slow Boat to China” in extreme close up with no musical accompaniment, looking directly into Phoenix’s eyes without blinking, and not make it seem hokey in the least.  In fact, as a gay man I not only didn’t find this scene moving, as it probably isn’t meant to be, but found it uncomfortable in the extreme.

I saw the film at one of three sold-out midnight screenings at the Arclight Hollywood, which means in a theater packed with diehard film geeks with a passion for P.T. Anderson, and the reaction was muted at the end.  Admittedly, The Master is a deep, dark down-down downer, or it tries so hard to be that you let it, and there is a lot to think about leaving the theater, which is why I didn’t race home and scribble this review immediately, which I was fully expecting to do.

I feel the last sequence is weak, a bit of a ‘save,’ as if Anderson wasn’t sure how to wrap this up, but it is likely more of an homage to the sort of literature that inspires him, specifically short stories by damaged male American writers (if that isn’t redundant) from the last century.  My first reaction as the credits rolled was, This isn’t going to be nominated for Best Picture.  I could be wrong; the Academy and I definitely don’t see eye-to-eye on what is worthy, and the pedigree of this film in terms of script and performances is immaculate and delivers on expectations.  I am fairly confident Hoffman will receive a nod.  I’m not sure about Phoenix, despite the considerable effort he threw behind Freddy.

I would have given The Master a Wow, but for the ending and the fact I strongly believe it was told from the wrong perspective, I’m downgrading it.