I was chatting up a Handsome Young Buck (HYB) at Gold’s Gym Hollywood recently over a mega-protein power smoothie, which was that particular grainy pastel peach pink those shakes tend to be.  My train of thought was leaping from track to track, as it is wont to do when I’m testing out an HYB to see if he can make it to pillow talk without a thumping headache from trying to keep up with me, or if I should just keep it Tarzan-simple and limited to grunts.

I like to think this amazing picture is a still from the musical "Arab Spring Awakening."

I was explaining that the reason I don’t vote is mostly to protest our electoral system, which allowed the schizo fundamentalist who spoke to God into power in the first instance, but that I feel I make my civic contribution by writing about politics in this blog; after all, I called it early when I was advocating revolution here in the States during the Arab Spring, and now we have the enfeebled OWS, which for all I know owes everything to my turning Colonel Gaddafi into a disgruntled black drag queen…

“Um,” I blinked. “ It was an uprising in the Arab parts of North Africa that toppled dictatorships in Tunisia, Egypt and Libya.”

“Spring is a season.  It’s something they have in other parts of the world when the weather changes drastically.  It follows something called winter.”

I then went on to describe snow, and was a bit of a dick making fun of HYB when he’s not in the least bit blond, just interested in other things than the Middle East, which is reasonable seeing as it is a chronic mess, a difficult, violent telenovela to follow.  To his credit, HYB took my teasing in stride and even made fun of himself, which is more than I would have done.  I would have punched me for being so snarky and condescending.

My middle-aged British friends on Facebook were all very R.I.P. Ken 🙁 when shock-schlock film director Ken Russell kicked the bucket on November 27.  He was audacious, but perhaps my least favorite of the third-quarter-of-the-twentieth-century auteurs.  I have watched him bounce around Soho in London on occasion over the past decade, and he seemed like a jovial old clown, a potentially good drinking buddy, of which there are not a few in England.  I imagine his deathbed scene was sweaty, overly lit, garishly decorated and often shot in wide angle.

Russell seriously traumatized me as a child with his adaptation of Huxely’s The Devils of Loudon, and I’ve grimaced when I’ve heard his name ever since.  I must have seen it in some sort of retrospective a few years after it first came out because there is no way I saw it in 1971.  What happened was my mother, a devoted film buff at the time, often took us to the English-language Pasquino Cinema in Rome mid-week, when these sort of mini film festivals were playing.  I don’t think she realized what she dragged her pre-pubescent children into The Devils, which starred Vanessa Redgrave as a vindictive hunchback nun and Oliver Reed as a womanizing priest, who is accused of heresy, graphically tortured and then burned at the stake.  It is such a nightmare of a film that Redgrave—not exactly the face of sane normalcy herself—kept it off her version of her filmography for years (she has recently revisited that opinion).

Redgrave as the deformed Ursuline nun.

I saw The Devils when I was about ten.  I remember feeling sick when they crushed Reed’s balls in one of the torture scenes, and might have actually puked when they burned him.  At any rate, I know that’s the moment I ran out of the movie theater, clutching the wall and wanting to go home and crawl under my bed for safety from the Inquisition.

One line did stick with me for good, and may have sown the seeds for my lapse from religion later in life.  Getting out of bed after banging a novice nun, whom he will later marry in a secret ceremony, Reed’s character, Grandier, says something like, “It’s not surprising you are confused by Angela Merici’s sanctimonious claptrap.”  I loved that: sanctimonious claptrap.  Really sums the whole Catholic/religious circus up in two apt, percussive words that make such a lively couple, like a pair of stamping flamenco dancers.

A tidier 70s horror Goth esthetic is HR Giger’s, whose bar in a museum dedicated to his work in Gruyères, Switzerland is a trip and a half.  Indeed, my first instinct when seeing pictures of it on Architizer.com was to wonder if and when I might drop acid again.  I think I would want to be in Giger’s bar when it kicks in, but I’d want to go somewhere else soon afterwards, maybe a nice pastoral field so I would start envisioning a gentler von Trier film like Melancholia, rather than fry my mind forever by staying too long in what looks like Ken Russell’s take on Jurassic Park.

I imagine Gruyères is where they blow holes in the cheese I eat every morning for breakfast.  It’s fondue central.  Yum.  You can read more about the bar here.

The third installment of the Twilight series, Breaking Dawn, passed $500 million at the worldwide box office on Wednesday.  Now its distributor, Summit, is looking to buy Lionsgate, a mini major that seems to have been on every wannabe mogul’s Christmas wish list for the past few years now, including Carl Icahn.  I’ve begun to think of Lionsgate as a Portia in The Merchant of Venice: a desirable woman with a tidy fortune who keeps spurning suitors by confusing them with trick boxes, but marry she must at some point.

Iceland is the first western country to officially recognize Palestine as a separate country.  It’s nice to know that Iceland is still around.  I had just assumed that after the enormous national Ponzi scheme they were running, which basically incinerated their economy, that everyone had left and gone to Denmark to becoming fully self-realized as extras in an existential Lars von Trier drama.

I guess this is a baby step forward for Palestine, which is currently recognized by one hundred and twenty-seven UN signatories, few of whom the HYB I was chatting up at the gym has ever heard of or can point to on a map, even if we colored coded it for him:

Countries that recognize Palestine. Shucks, are we in a minority over this AGAIN?

Will there be an exchange of diplomatic missions?  And where does the Icelandic ambassador go when he gets there all alone because his wife and children would rather stay and hunt seal on a melting polar cap, pay eight dollars for a beer and have a couple dozen names for snow than duke it out on the West bank.  I can just see the poor bastard who gets this job on his knees at the equivalent of the State Department in Reykjavik, pleading not to be forced into this.  I imagine he looks a bit like a penguin, and his boss like a polar bear dressed as Björk.

Björk, Iceland's ambassador to the world.

According to Wikipedia, the Palestinians claim Jerusalem as their capital, but good luck to them with that claim; no doubt there are probably some Opus Dei-type nutters hovering around the Vatican who want to launch a crusade to reclaim the “holy city” as well.  The President of Palestine lives in Ramallah, so that’s where our penguin ambassador would be headed.  Bet it’s a fucking shithole and the A/C is sporadic.  Poor penguin.

Once again, no shouty crackers head-case from the streets of Hollywood has volunteered to be leered at as our Schizo of the Week, so we have to pick one from the media.  Has to be Herman Cain.  In one of the more sexist articles ever published by a mainstream news organization, Newsweek-The Daily Beast attributes Cain’s hubristic, deluded run for president to an overload of testosterone, which apparently happens to successful men.

I can't bring myself to sully PFC with a pic of Pizza Man, so here's another of the Arab-looking hunny from Muto Manifesto.

Can you imagine Tina Brown running a similar article about Michele Bachmann and attributing her putative submissiveness to her levels of estrogen?  There would be hell to pay for.  But poor Tina is trying to make sense of the sideshow of freaks the Republican Party has become.  It’s just such a giggle, the whole thing; they are so bonkers , so shouty crackers.

I can picture them in the editor’s meeting at The Daily Beast scratching their heads about these “candidates” the GOP is fielding.  Finally, Tina throws her hands up and says, “Well, somebody think of something.  It can’t just be insanity.  Michelle Cottle, whip up a pseudo-scientific piece and attribute it to…I dunno, hormones.  Sort it out, I’m late to have my hair coloured,” and she pronounces the ‘u’ because she’s British.

A little Madness in the Spring
Is wholesome even for the King,
But God be with the Clown —
Who ponders this tremendous scene —
This whole Experiment of Green —
As if it were his own!

The Rules of Attraction 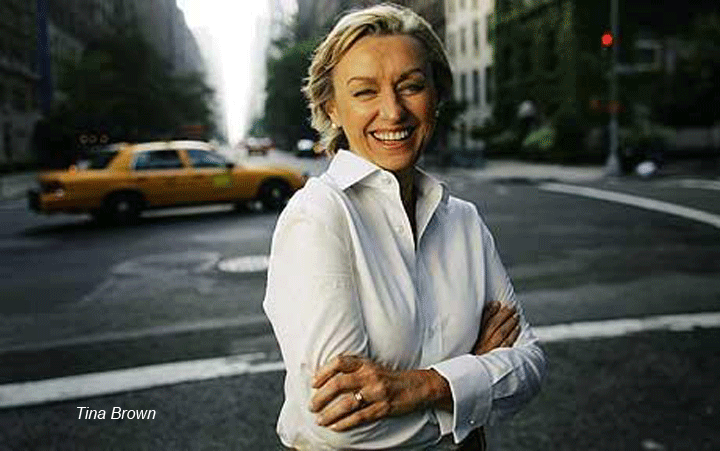