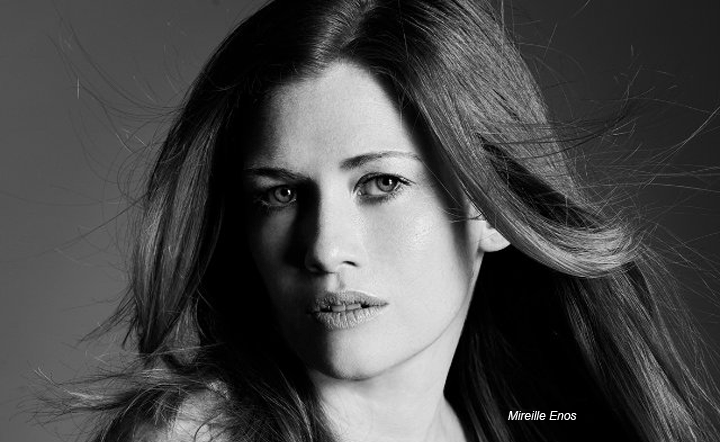 I’m an even bigger anomaly than the actress who is the subject of this article: I had absolutely no problem with the pacing of seasons one and two of AMC’s The Killing, which ambled along a staggering twenty-four episodes just to solve a single murder. While other TV wonks around the Internet were huffing ‘Good riddance!’ when the show was cancelled, I whimpered a little inside; I had been under the impression that premium cable, and AMC in particular, was an incubator and promoter of edgy, intelligent dramas of the kind seldom allowed on the big screen any more.

Then the show, starring Mireille Enos as the damaged homicide detective Sarah Linden, was resurrected and my faith in cable TV was restored. We’re now on episode four of the new twelve-episode season, and the show’s creators have promised the crime will be resolved by the finale, rather than “dragging it out” (the Danish original that it’s based on, Forbrydelsen, resolved the first Rosie Larsen murder in a mere twenty episodes, still an eternity for a single case). I was unsettled when I first watch The Killing precisely because it starred Enos—she played the creepy twins from a traditional polygamist compound, Kathy and Jodeen Marquardt, in Big Love. Enos stood out in that show as well; it’s the downward tilt of her eyes; that pale red hair and paler freckled skin; her versatile mouth that goes from bee-stung pouty to crinkled and terse in a matter of seconds, a sea anemone puckering away from predator.

Just as slowly as the show itself evolved, I was eventually seduced by Enos. She’s like no other actor out there, unusual casting, not the usual square-jawed female cop out to prove she’s equal to or better than the guys. Linden was abused as a child, shunted around foster homes, and Enos carries the sense memory of that experience in every shot, every sequence. She’s the human equivalent of the irreparably damaged dog from the pound that was rescued just before being put to sleep but will never trust again.  Enos diminutive, intense, unsettled and unsettling, the heir to Jodie Foster’s Clarice from Silence of the Lambs? Except Enos’s Linden, with her emotional issues and her almost autistic single-minded pursuit of killers at the cost of all her relationships (cop and non-cop alike), makes Clarice look like a Stepford Wife. Another thing I admit to finding weird was when I dipped into IMDb to find out more about Enos and discovered she really is a Mormon. She even went to Brigham Young University. I doubt she is the kind of Mormon like the pair she played in Big Love, but she must be descended from people like that, and I couldn’t shake off the image of her leaving the set of The Killing in Vancouver every night, donning a long-sleeved floor-length frock, twisting her hair in a chaste French braid, and dutifully attending her husband Alan Ruck, an actor best known for playing Ferris Bueller’s sidekick. (As the descendant of Puritan preachers, I hope Enos pays me back some day for that gross act of religious prejudice by imagining me in a silver-buckled, flat-topped black hat, breeches and similarly buckled shoes.)

The comparison to Jodie Foster is obvious not just because of the parallels between the roles of Clarice and Linden but because of the actors’ pint-sized height; having said that, at 5’2” Enos is at least couple of inches taller than Jodie. In terms of facial features, Enos is more the love child of Jessica Chastain and Sissy Spacek, with a far more versatile acting range than the former and none of the wry humor of the latter. Or there’s been no wry humor in anything I’ve seen so far that Enos has done, just the occasional sardonic smirk; she might be a sidesplitting comedienne who puts Sarah Silverman in the corner, although I have yet to read anything in any interview with her to indicate that she isn’t exactly the intense, circumspect and reserved person she plays on screen.

As with all very good shows, from Breaking Bad to Game of Thrones, it takes a few seasons for them to pick up pace, to work out kinks and become truly great, and The Killing is no exception. I’m thoroughly enjoying this season so far, and the addition of Peter Sarsgaard as the (perhaps) wrongfully accused serial killer on death row has helped kick the show over the goal post; Sarsgaard is the rightful heir to John Malkovich, and yet such a woefully underused talent. And there’s a new kid in town, who’s career demands tracking: the tiny teen bull dyke, Bullet, played by Bex Taylor-Klaus, who is so utterly believable and such a compelling character that I wouldn’t mind seeing a spin-off show just to follow her life as a street kid in Seattle. Between them, Sarsgaard and Taylor-Klaus are hauling The Killing up into the ranks of The Wire; the writing is getting that good, too. Now Enos is making the jump to the big screen, as Brad Pitt’s wife in World War Z. Hmm.  Again, it’s inventive casting, but that seems to be what Enos brings to any role she does. It’s hard to divorce a massive celebrity from who he is in real life, and the real Brad Pitt marries women like Jennifer Aniston and Angelina Jolie—beautiful, talented women both, but obvious choices compared to feisty, fiery Enos and her freckled, perplexed scowl capped by straw-red hair, a pissed-off pixie with a few bones to pick with everyone who ever though she was just about cute spells. And don’t dress her in pink tulle, ever!

Enos has now been cast in not one but two Atom Egoyan films, Queen of the Night with Ryan Reynolds and Devil’s Knot with the resurgent Reese Witherspoon, both crime dramas by the sounds of them. The films are being shot almost back to back, which is as usual admirably prolific of Egoyan, or it would be admirable if I had much time for his work as of late—it’s been a while since he blew me away. But Enos is perfect for his style of brooding, downtempo intensity.

I’ve gone from finding Enos unsettling and untrustworthy to being one of her biggest admirers; in cases like this, I like having my mind changed. I won’t see World War Z. Again, there are fewer and fewer feature films coming out that she or anyone with any gravitas is suited for, a shame all around, but there’s no use lamenting the passing of an era, even if it is the entertainment format I trained up for my entire career just to have it all but vanish. The silver-lined handkerchief that daubs away the tears of lament is intelligent TV dramas like The Killing, which have the added advantage of being many hours and seasons longer than features. And when they’re this great all around, that’s such a silver lining that it’s downright platinum.