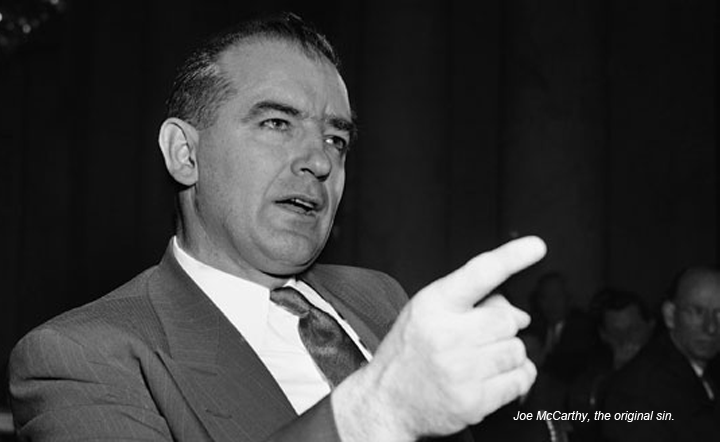 It’s fait accompli at this point: the wheels of change within the Republican Party are churning and cannot be stopped.  Every right-winger from Bobby Jindal, to David Brooks, to the execrable Glenn Beck is calling for an overhaul.  That nobody has a game plan, much less a leader for it, isn’t surprising; the Party is still too seeped in a dysfunction of denial, hatred, and insincerity to make any meaningful changes at this juncture.  But rock bottom is nigh.

Note that I don’t call them ‘conservatives’ — the G.O.P. lost the right to that adjective a long time ago, a longer time ago than we think.  Bush 43 and his Neoconservatives were actually the non-conservatives; they conserved nothing, and destroyed almost everything, the Party included.  I don’t need to make a list of their wrongdoings; over four years after their ouster, it’s still a tedious litany about which no one needs to be reminded.

The point is, how will the G.O.P. reclaim ‘conservative’?  Because reclaim it they must to continue.

Looking at President Obama and Hillary Clinton exchanging praise for each other on 60 Minutes the other day, I was struck by two things: how these two former adversaries are now a solid, formidable team; how they are a perfect balance of liberal and conservative, which in itself worryingly obviates the need for a second party, and leaves Republicans with no other agenda but to oppose them.  Yet doesn’t opposing something that is in the right simply make you wrong?

It’s as if by default that the Democrats have had to assume both roles after what’s happened to the G.O.P. over the last fifty-odd years.  That in itself is dangerous in the long term—we need at least a two-party system to have a non-dyfunctional government—but in the interim it should come as some comfort for Northeast establishment Republicans that their fire is being tended by the opposition while they get their act together, and stop mingling on the sidelines like so many disgruntled aristocrats fed up with a game they haven’t been allowed to participate in since Eisenhower (with a brief, if illusory, period during the beginning of the Reagan years).

Indeed, as someone who grew up in Europe and has an outsider viewpoint, I don’t see anything particularly liberal about Obama.  The Republicans, on the other hand, are the equivalent of those fringe European parties like the ultra-nationalist BNP in the U.K., who pose no threat to government because they aren’t taken seriously outside certain pubs in foxhunting country.  But in the U.S. they do pose a threat—to begin with, they have control over Congress and the right-wing media.

As many people have noted about Spielberg’s Lincoln, it’s amazing how progressive the Republican Party once was.  Indeed, conservative doesn’t mean non-progressive.  It means cautious, perhaps holding onto traditional values, depending on what those values are.  And traditional doesn’t mean fuddy-duddy, much less hate mongering, war mongering, sociopathically mendacious, or excessively religious.  I prefer to think of it as meaning classic, time-honored. Like many, I was struck by a Young Republicans’ poster from 1956 that was making a round of shares on Facebook last week.  It outlines in bullet points the conservative outlook on labor at the time.  This is when my father would have been in college, and sums up the attitude of Northeast Republicans, a breed that has since been stampeded out of existence by their feral cousins from the South and West, you know, the former slave-owning Confederacy.

That the poster is from the mid-50s is significant because when I apply my admittedly limited knowledge of American history to search for a time when things began to go wrong for the G.O.P., I keep getting an image of Joe McCarthy, the Republican senator from Wisconsin who from 1950 to 1954 who went on a witch hunt for communists in government, the media, entertainment and, ill-fatedly, the army itself, spinning baseless Cold War paranoia into the most shamelessly self-serving grab for power in the country’s history.  Wikipedia sums up best what McCarthyism stands for today: “demagogic, reckless, and unsubstantiated accusations, as well as public attacks on the character or patriotism of political opponents.”

Now, I wonder where we’ve seen that sort of behavior before, and from whom.  Palin?  Bachmann?  Beck?  Limbaugh?  Coulter?  Okay, okay, I’ll stop the litany.  But these are the people who influence the right-wing discourse and determine how cowered Republican politicians behave on Capitol Hill.  In that respect, I agree with the President.

For anyone who has seen the footage from the thirty-six day Army-McCarthy hearings, there is a wonderful moment that marks the turning point in the senator’s crusade of terror, in which the Army’s chief legal representative, Joseph Welch, says, “Until this moment, Senator, I think I never really gauged your cruelty or your recklessness … You’ve done enough. Have you no sense of decency, sir, at long last? Have you left no sense of decency?”  And then a recess is called, but as the camera lingers on McCarthy’s exposed and chastised face, you know this is the beginning of the end.  Within three years he will not only be utterly discredited but literally six feet under from cirrhosis due to excessive drinking.

Yet, even though he had left his earthly body, McCarthy’s specter seeped and spread throughout the G.O.P., until we reached the first watershed in the transformation of the modern Republican Party, the nomination of Arizona senator Barry Goldwater in 1964, which is widely seen as the moment rational, intellectual Northeast Republicans lost control of the Party to the rube-ruled “red states,” an ironic moniker when you remember that these are the Children of the Damned spawned by the anti-communist McCarthy.

I can’t seem to veer aware from the horror story language.  The way I see it, McCarthy was both the original sin and the serpent in our Garden of Eden.  He unhinged the national discourse so that it was no longer Democratic agenda versus Republican, but the sane versus the psychotic; these days, a rational person is forced to support the Democrats because it is the only recourse for a humane being with any sense of decency or justice.

(A superficial Google search reveals that I’m not alone in my belief that the origin of the downfall of the modern G.O.P. was McCarthy.  Neal Gabler wrote a worthy article in the L.A. Times in 2008 following Obama’s election that supports my hypothesis with greater detail.)

My entire life I have observed my father, a stalwart Northeast Republican who worked on the highly successful Republican advertising campaign in 1980, and it’s been nothing but frustration for him as he struggles with his unflinching loyalty to the party and his dismay at what it has become.  If I were in his position, I would become an independent at this juncture and vote for whomever is right for office both on the local and national levels, simply out of loyalty to the country.  But like so many of his breed, he tries to make the fragile glass slipper fit the ugly step-sister’s foot by going off on anti-Democratic tangents that would be more constructively directed at the G.O.P. itself.  That would certainly make more sense, again because Obama and the Democrats have co-opted and now completely own the conservative agenda and values with which my father was raised; he needs to reclaim the values he believed in as a young Republican.

Like many real, traditional non-McCathyites David Brooks is calling for “a second G.O.P.,” but offers no solution for how this will be created, just that the Northeasterners should have control and it should appeal to all conservatives across the U.S., the blue states in particular.  Others who are dissatisfied with both parties want an amorphous third party, but that is a pipedream that always seems bandied about, but now seems to have greater possibility because of the destruction the McCarthyites have wrought.

Brooks asks if New Jersey governor Chris Christie is the right Moses to lead true conservatives out of their bondage to the deranged rubes of the hinterlands, and he certainly seems to be on everyone’s lips these days, particularly after Hurricane Sandy forced his true nature to the forefront.

But all musings about Christie come with a big question mark.  Or with a fat question mark, I should add.  Okay, I’ll be the little girl in The Emperor’s New Clothes and say it: Christie is an obese loudmouth who is fine for Jersey because he embodies that particular reality TV-friendly culture, but everyone knows he is unlikely to carry the ball over the national elections.  Yes, the New G.O.P. needs a man like him, but not him per se.  Again, I’ll tell it like it is because Northeast Republican is where I come from: he’s too gauche.  I also have a feeling, entirely unsubstantiated by fact, that Christie’s past would not be able to withstand the kind of scrutiny a presidential candidate must undergo. Nobody seems to have the answer for what the New G.O.P. should look like and who should lead it, and nor do I.  But I think I have the key to it: Reexamine the word ‘conservative.’  It is not what McCarthy redefined, what Goldwater and Nixon and finally Karl Rove exploited and turned into the “demagogic, reckless” connotation we give it today.  Real conservatism as I see it, i.e., the truly traditional kind that is embodied by that Young Republican poster from 1956, is now completely owned by the Democrats.  Obama has so deftly woven it with progressive and liberal values that it will take years before whatever the New G.O.P. becomes can recover it.

There comes a time when gangrene has set in with a patient to the point where amputation is no longer useful.  I know that in the past I have called for the G.O.P. to get rid of the McCarthyite rubes by cutting them off, but that’s not possible.  The Party is now blackened and festering, and will die of its own accord.  Most likely there won’t be a need for a third party and some sort of phoenix will arise spearheaded by the so-called RINOs.  My crystal ball is as cloudy as Brooks’ in that respect.

All real change begins with a shift in perception and perspective.  If there is a new G.O.P., as a branding consultant I would advise that it simply be called the Conservative Party.  That would be the first step in separating the aforementioned real conservative values from the Democrats and retaking the republican patrimony.

And then, Senator, hopefully we can begin to get some decency up in here.