The Tired, Lame Religiosity Of Some Conservative Catholic Homo Bloggers (Who Are Also Bottom Bitches) 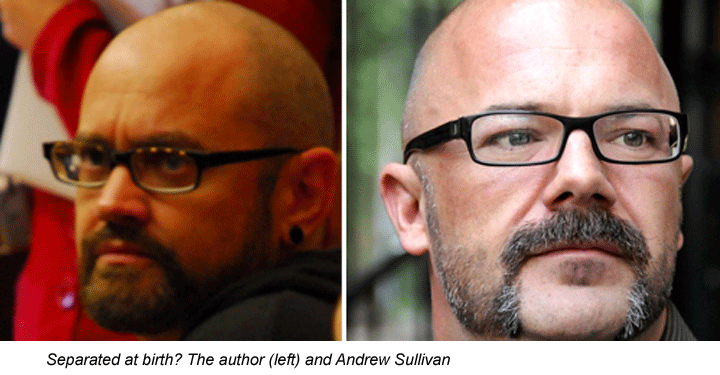 I always have great fun taking potshots at Sullivan.  The title of this post is a reworking of one of his, The Tired, Lame Bigotry of Some Homosexuals, in which he bemoans a Hunky Jesus contest held in San Francisco over Easter. I thought the contest was kinda funny, one of those things that are more enjoyable in real life than in video, like almost all stand-up comedy.  But what makes me chuckle most is this quote from Sullivan:

“You want to grow some balls? Hold a Hunky Mohammed Contest on Ramadan. And, by the way, thanks for doing your bit to empower every religious right prejudice about gays.”

Oh, Miss Thing! You got yourself into a lather of this one, haven’t you?  What sort of noodle-brained, banana split logic is that?  Why would anyone in a country founded by Christian fundamentalists so extreme they were booted of a Protestant nation ever make fun of Mohammed?  Just to add my own fuel to Missy’s specious fire, I don’t see many imams picketing military funerals with cheerful signs proclaiming that God hates fags.

To begin with, there are no “graven” images of Mohammed.  Indeed, there are no images at all, except in the cartoon sections of Danish newspapers.  This is because Mo specifically stated he wanted no iconography.  But the Jesus cult of personality is all over the place.  His brand is in your face from childhood, probably the first dead person a child ever encounters, in a grisly, utterly unnecessary icon of a tortured man who died slowly and excruciatingly. Not a tranny: My e-publisher, Diane Pernet

I’ll bet most of those trannies and participants in the Hunky Jesus contest were former Christians, who probably have a few well-justified axes to grind.  Ultra-femme boys anywhere, especially in super-religious communities, i.e., the kind who grow up to don frocks and flasies and perform in outdoor drag shows in Frisco, don’t have an easy time of it.  And the teasing and harassment in communities where religion is still practiced is not all in good fun, like the HUnky Jesus contest was.  Often a Ghey’s life is in danger.

Besides, my personal Jesus would probably think that contest was a bit of a hoot.  I’d like to think he would have laughed heartily and then turned the trannies into real women at the end as a blessing.

Miss Sullivan… is it all right if I call you Andrea?  Andrea, darling, there is no fun in provoking the Mossies needlessly.  Look at what happened when that nut job in Florida burned a Koran: UN workers in Afghanistan were murdered.  You have a huge following, a following of conservative Christians just like you, who go “awwww” when you post touching images of Christ in the Holy Sepulcher over Easter, but who might get angry when you enflame them.  There are a lot of wacky people out there online, people who might take your words to heart, who might just “grow some balls” and follow your advice.  Why even suggest such a thing?

Again, those were not Muslims up there making fun of Islam.  Hopefully one day Muslims will feel as comfortable as we do and will be as free as we are to mock whatever they please.

Satire shouldn’t be limited to politics, nor should wacky conspiracy theories, like enflaming the internet with bizarre allegations that Trig Palin is really Britsol’s child, not Sarah’s.  I believe “Trig Trutherism” is really a huge right-wing conspiracy hatched by none other than you, Andrea, to make Palin more sympathetic.

If Palin is ever president — and my fingers vomited a little bit in panic just typing those words — will she have to provide the world with a DNA certificate proving she is Trig’s mother?

I went out last night for delicious tacos and too much red wine at the Yamashiro Framer’s Market overlooking LA, which takes place every Thursday night in the summer.  I was with my friend, Dame Bea, who requested that name last night should I ever blog about her, which I am doing right now.  Dame Bea and I grew up in Rome a few blocks from each other, our fathers were friends and probably “good shepherds” together, but she and I only became close last year.  She sounds much more like we all did when we were kids and we flipped from one language to the other, which means finding a linguistic middle ground of sorts.  I’ve dropped the Britishy cadence, but still have a lazy Euro mumble-drone in my voice.

The view of LA from Yamashiro. And it was 70 degrees last night.

“Who is this Andrew Sullivan you keep crapping on about, and why do we care?” Dame Bea asked.  I had just assumed everyone knew who he was even outside the blogosphere.

“He’s a superstar blogger right-wing Catholic Ghey, who has just merged his site with The Daily Beast.”

“But unlike me, he’s a bottom bitch, which I assume because he’s also HIV positive, which means he’s been willingly sodomized many times without a condom.  Could be from a blood transfusion, of course.”

I’ve never believed in too much information being too much.  If a story doesn’t have bodily fluids in it, it has no substance.  When an old friend of mine was asked by her husband what on earth she saw in me, she apparently replied, “It’s the details.”

It should be noted that I still don’t see what she sees in him, but that’s another story.